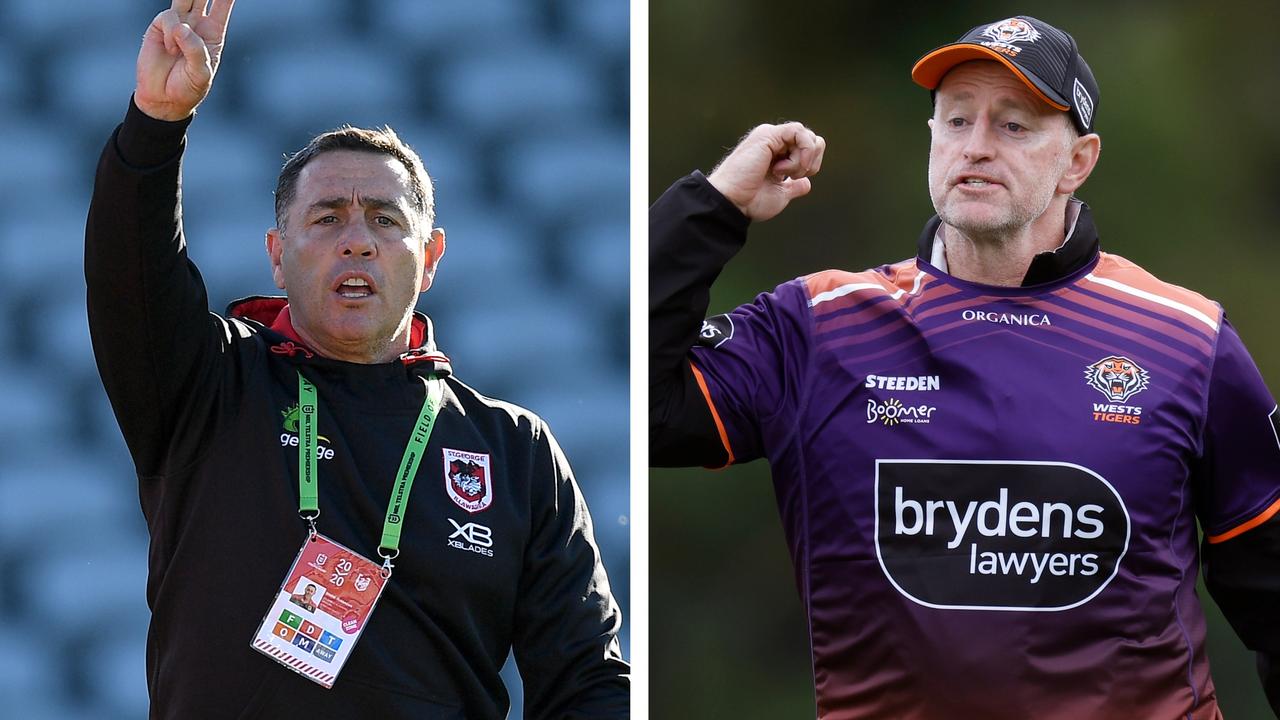 The hunt for Trent Barrett’s replacement has already begun with highly touted assistants and premiership-winnning coaches among the contenders.

But there’s one option that would be sure to get tongues wagging. A Shane Flanagan and Michael Maguire coaching swap.

The Daily Telegraph’s Phil Rothfield revealed on NRL 360 that Maguire has been a name mentioned as potential replacement for Barrett at the Bulldogs.

“There have been all sorts of names thrown around today. Michael Maguire even from the Wests Tigers,” Rothfield said on NRL 360.

If you take Phil Gould on his word for what he wants in his next Bulldogs coach both Flanagan and Maguire would be right at the top of the list.

“I think it’s a job for an experienced man,” Gould said of his next appointment.

They don’t come much more experienced than Flanagan and Maguire.

56-year-old Flanagan has coached 108 wins from 198 NRL matches with the Sharks, while 48-year-old Maguire has coached 113 wins from 231 games and also coached Wigan for 70 matches in the Super League.

Both coaches are premiership winners with Flanagan leading the Sharks to a drought-breaking title in 2016, while two years earlier Maguire led the Rabbitohs to a first title in 43 years, while he also tasted title success with Wigan.

But what if there was a way that both Flanagan and Maguire could secure their next jobs in the NRL at the same time.

Let’s be honest, Maguire is on borrowed time at the Tigers, who have gone backwards every season he has been at the helm over four years, at least in terms of their position on the ladder.

With just two wins from the opening 10 games in 2022, the Tigers sit second last and the longest finals drought in the NRL shows no sign of being broken.

Maguire is off-contract at the end of the season and only a miracle would see the Tigers extend him, despite his close relationship with Tim Sheens, given the lack of on-field success during his tenure.

That means the Tigers are already on the lookout for a new coach whether they admit it publicly or not.

Flanagan has not been a head coach in the NRL since he was suspended by the game’s governing body in 2018, but has always maintained his desire to return to the top job when the right position becomes available.

Only last year as the Tigers finished their season with a string of losses was Flanagan linked to the Concord job.

At the time, Flanagan played the diplomat and was reluctant to publicly put his name forward for the Tigers job out of respect for Maguire, but by the same token made no secret of his desire to rejoin the NRL head coaching ranks.

The Tigers underwent a shambolic internal review and backflipped on a seemingly ominous sacking of Maguire to reinstate him for 2022 and give him one more pre-season to try and turn things around.

The facts are Maguire hasn’t been able to turn the Tigers’ fortunes around in 2022 for a variety of reasons and the writing seems on the wall that he will depart the club after this season, as he and the club go in a new direction.

The Tigers will be keen to replace Maguire with an experienced coach, who is a proven winner and has the ability to attract stars to the club, which has been a major issue for the organisation over a long period.

Flanagan ticks all those boxes having had great success over his career at the Sharks.

On the flip side Maguire’s stocks rise at the Bulldogs, particularly if Flanagan is not available for the position.

Gould has been a public supporter of Maguire through his media roles with Channel 9. Gould has often said it is the Tigers’ roster and not Maguire that is to blame for the club’s poor results over a long period of time.

“I know Michael Maguire and how hard he works, how passionate he is… do I think their performances reflect his coaching ability? No, I don’t.” Gould said on The Six Tackles with Gus podcast.

“We tend to point the finger at the coach rather than the players.

“I think roster management has needed to be a lot better than what it’s been, but that started a number of years ago. Michael Maguire inherited an unenviable situation when he first went there.”

The Tigers’ inability to sign star players is producing inconsistent results on the field.

One might ask why would the Bulldogs want Maguire given his lack of success at the Tigers? But Madge has proven what he can do with a quality roster, making multiple preliminary finals and winning a title with Souths in 2014.

The Bulldogs may still have an unbalanced roster, but with Gould at the helm they have shown they are capable of landing marquee talent. Panthers star Viliame Kikau and Eels hooker Reed Mahoney are two obvious examples.

With Gould and Maguire at the club it gives the Bulldogs a solid foundation to build the club’s roster over the next 18 months, which Gould said will be crucial as they aim to hit their straps in 2024.

Only six players are contracted beyond 2023 at the Bulldogs, so Maguire would have a clean slate to mould the roster he wants and he would have plenty of money to spend.

Maguire’s style also matches the Bulldogs’ DNA. A tough task master who has built his successful teams on fitness and hard work.

The last time the Bulldogs won a premiership they had fitness fanatic, the late Steve Folkes as coach, while their last two grand finals were overseen by another tough task master in Des Hasler.

Braith Anasta alluded to the Bulldogs losing their DNA in recent years, which was built on supreme fitness and hard work and Paul Kent agreed that they are one of the least fit teams in the NRL.

Maguire could turn that around with a strong pre-season ahead of 2023, while he builds the roster over the next 18 months.

There is every chance that Gould will install Flanagan as his next coach on a long-term deal given their history together and their close relationship.

But just maybe there is a domino effect that sees the Tigers go after Flanagan leaving Maguire with a clear run to the Bulldogs coaching vacancy.

Stranger things have happened in the NRL. Watch this space.