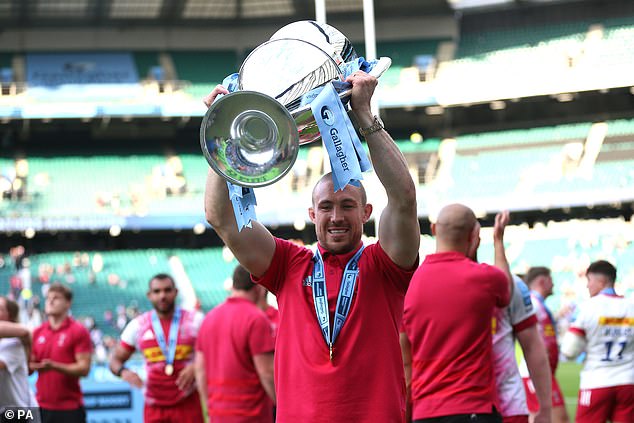 Mike Brown has been running through his checklist as he packs his bag for an away trip. The boots and gumshield have been replaced by textbooks and university coursework.

With a second child due in January, the Browns have relocated back to their family home near London to begin a new chapter. The snag is that Brown, who has been commuting to Manchester for university lectures, still does not know what that chapter looks like.

For the first time since leaving school in 2005, he does not have a job. Until now, Brown has chosen not to talk about the prospect of rugby retirement. But as the show rolls on without him, it is time to address the future.

‘I’m in a weird grey area,’ he says. ‘I’m still able to play — and I’d love an opportunity to play if everything aligns — but there are no gigs out there. I’m pushing on with my transition into life after rugby and I guess we’ll see what comes first.

‘I’m not going to sit here hanging on, waiting for one last pay cheque. If something else comes up then I’ll take it. Everyone in sport has to go through it at some point and for me it could be now. It’s not the way I imagined it finishing but I’ve loved it and that’s life.’

Over the summer months, Brown has been training by himself at Cobham Rugby Club. Recently he has been joined by ex-Harlequins team-mate Niall Saunders. Brown sets his alarm for a 6.30am start, meaning he has finished his main fitness hit before the school run.

‘Training on your own can be a bit bleak when you’ve used to the team environment for so long,’ he says. ‘When there’s no obvious end goal you have to find a way to motivate yourself. You have your ups and downs.

‘Of course I’m sad about it but as time goes by that feeling becomes a little less intense. I’ve had help from Craig White, learning coping mechanisms to deal with the bad moments, negative thoughts and the uncertainty. It’s important to keep a busy routine.

‘I’ve been lucky. Jordan Turner-Hall invited me down to Worthing and asked me to get involved to give me some experience. It’s an opportunity to see things from a different angle, dip my toe into coaching and share my experiences.

‘I’m really thankful to Jordy. Sometimes I jump into sessions if I want to get my hands on the ball and drive up the tempo. They’re skilful players. Guys like Nigel Redman and Russell Earnshaw have gone out of their way to introduce me to new people.’

One upside has been the extra family time, reclaiming weekend time with his son, Jax, and wife Eliza. He has been tapping into the contacts, new and old, from his illustrious playing career. He has spent time with Premier League CEOs, sat in on FA courses and is working on a masters in sporting directorship at Manchester Met University.

‘You have to be so insular and narrow-minded as a professional athlete,’ he says. ‘If you’re playing for England under Eddie Jones, all you’re thinking about is your performance. Now I want to focus on supporting and developing other people. I’m enjoying getting out of my comfort zone and going into a learning phase of my life.

People have a perception of me in rugby — direct, challenging — so outside of rugby it’s been easier to show the side that’s curious, interested and driven. I look at Ben Ryan’s role with Brentford. I’d love to do something like that. I’d love to broaden my horizons in a sport like football and add the value of my rugby career.

‘Where I want to get to is a high-performance, leadership role in elite sport; building it, developing it, sustaining it. I’ve worked with so many coaches, in many different environments, and you experience what works, what doesn’t, and now I’m learning even more from spending time in other sports.

It can be a scary process at times with no job certainty, no dates to work to. I’ve got my family to look after and we’ve got the new one due, but I’m also enjoying this phase of my life. I’d just love an opportunity to get my teeth into something meaningful, but I’m also aware I may need someone to take a punt on me.’

Brown admitted: ‘When I was dropped by England I stopped watching the games. I’d just beat myself up. I didn’t even watch the World Cup final. I don’t miss things like selection politics but I miss the matchday buzz. Over the summer I spoke to a friend who said it’s almost like you’re mourning something or someone… you’ve got to tackle it head on.

‘You can watch games on TV and think “I used to do that” but there’s no point running away from it. It’s just something you have to meet head on instead of hiding away from it, then things get easier. Now I can enjoy watching the England boys as a supporter and at some point soon I’ll be the same with the Premiership games.’

Brown reels off the teams and players he is excited to see this season: Harlequins, Northampton, London Irish. He picks out Henry Arundell, Tommy Freeman and Cadan Murley as his players to watch, claiming they must be part of Jones’s plans if England are going to challenge France and Ireland at the World Cup.

In many ways, Brown was a part of rugby’s financial glory days. It was a stark contrast to today’s dire straits that are threatening to put Worcester out of business.

‘Everyone knew clubs were struggling, so a situation like Worcester was inevitable,’ he said. ‘Others are struggling too. They’ve tried to hide behind Covid. Quins seem to have got it right. Others haven’t.

It seems increasing costs are not aligned with the revenue coming in — and haven’t been for some time. I’m not sure owners should hold the majority of the positions on the Prem Rugby board. There needs to be a shake up in the structure of the Premiership.

Holding club games during the Six Nations and autumn internationals, that doesn’t make sense. You need to get people in a room who are willing to be innovative. I feel there’s too much, “Well, we’ve always done it this way”.’

Rugby is facing uncertain times. If things do not improve soon, there could be more players waving an inglorious farewell to the sport.