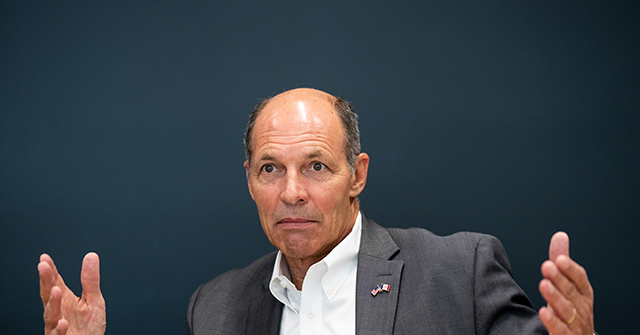 Franken released an ad via Twitter, saying towards the end, “Corporate special interests are ripping off Iowa families. We need a senator who doesn’t take their money.” The Democrat is running against longtime Republican incumbent Sen. Chuck Grassley.

FIRST AD: As a Navy Admiral, I spoke truth to power, no matter their party.

Today, special interests rip off Iowa families. We need a Senator who doesn’t take their money.

I’m not taking a dime, and I’ll always speak truth to power and put country over party. pic.twitter.com/QhoI0LWGXC

However, as reported earlier this month, Franken has skirted his pledge not to accept “one dime of corporate PAC money” by taking money from the Democrat lawmakers’ PAC, which corporations have funded:

Additionally, the Hawkeye State Democrat took money from Midwest Values PAC, which belongs to former Democrat Sen. Al Franken. Franken disgracefully resigned in 2018 after being accused of sexual harassment. Since leaving, he claimed to be considering running again, as his PAC raised hundreds of thousands of dollars in the meantime.

Regarding the ad, the Republican Party of Iowa said that it was “dishonest and proves that Franken will say whatever he thinks people want to hear to get elected.”

Iowa Democrat Senate hopeful Mike Franken has taken money to help fund his campaign from multiple PACs that take in corporate contributions despite having a self-imposed pledge not to take in “one dime of corporate PAC money.” https://t.co/FFKEr1H2SZ

However, the Senate hopeful is not the only Iowa Democrat to break their own pledge.

In July, Breitbart News reported that Rep. Cindy Axne, Iowa’s lone congressional Democrat, attacked her colleagues in the House who take money from corporations and PACs despite previously breaking her own pledge not to take PAC money.

Axne has pledged not to take money from corporations and PACs. But, in July, Breitbart News wrote the congresswoman had gone back on her pledge and accepted the same money she attacks others for taking. As of August 30, Axne has taken in $966,026 (557 contributions) in fundraising cash from PAC Money, according to OpenSecrets.

“Arrogant Mike Franken trashes rural Iowa one day and misleads Iowans about being propped up by corporate PACs the next. The guy is doing and saying whatever he can to get himself elected,” Republican Party of Iowa chairman Jeff Kaufmann said.

Kaufmann’s statement added that “Chuck Grassley is the nation’s hardest working Senator. He puts the needs of Iowans first, visits every county, every year, and tells Iowans the truth. Franken could learn a few things from Chuck Grassley.”

Jacob Bliss is a reporter for Breitbart News. Write to him at jbliss@breitbart.com or follow him on Twitter @JacobMBliss.