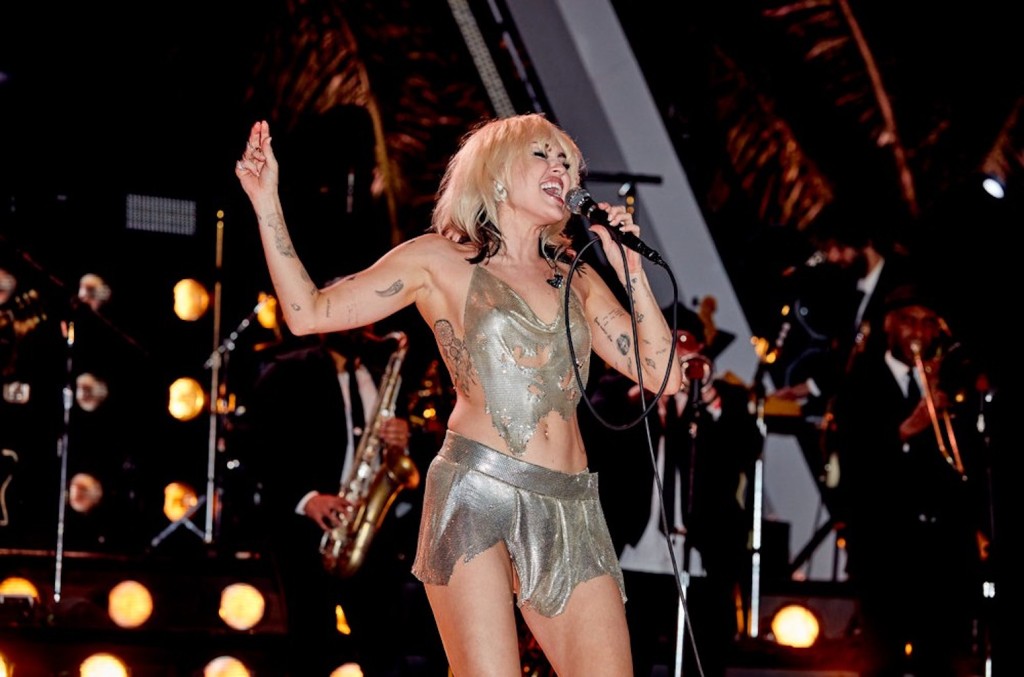 Miley Cyrus may seem like a go-with-the-flow person, but when it comes to a TV special like NBC’s Miley’s New Year’s Eve Party, she’s all about structure. Because of COVID, which prevented rehearsals and special guest appearances and prompted multiple location changes, the Miami-set live show had its fair share of challenges.

Still, after two difficult pandemic years, Cyrus and co-host Pete Davidson wanted to provide a form of escapism for audiences through live performances by Cyrus, Brandi Carlile, Saweetie and Anitta, among others, and sketches featuring Cyrus and Davidson.

“I think we represented what New Year’s is really about, which is connecting with each other, celebrating the year you’ve had, looking forward to the year that’s going to be,” says Cyrus of the special that drew 6 million linear viewers. “That was challenging, too, because we’d had such a hard two years and it was hard to ask people to reflect with happiness.”

Cyrus talks to THR about the challenges she faced (including a wardrobe malfunction), why Davidson was the perfect co-host and what she plans for the New Year’s Eve special that will ring in 2023.

Why did you want to do a New Year’s Eve special?

We were doing a traditional show at a very untraditional time. [The COVID surge] meant that the creative flexibility had to be at an all-time high because what was most important was the show must go on. We felt that the probability of a show not happening was getting higher and higher by the day. But we had [executive producer] Lorne Michaels, someone who is so used to keeping up in real time. I thought that [the combination of music and comedy] hasn’t really happened on a New Year’s show, [and we merged] into this variety show element where you’re able to talk about the year and the year to come, in a way, with a lightheartedness. We had had a really heavy two years, and we wanted to provide some escapism, but also be responsible and realistic about the kind of show we put on and to encourage people to get together and watch. … It ended up being a night that I’ll always remember as the first time that I was able to do Miley’s New Year’s Eve Party.

At what point did you decide Pete Davidson should be your co-host?

One thing about New Year’s is it’s very romantic. There is the sex appeal to it, and in your dream world you have the ultimate gentleman as a date. We thought that Pete was ideal for that role. There is something about him that’s very classic and his professionalism is off the charts, but there’s also a danger there. And that’s something that we really wanted for New Year’s because there always should be that energy of [not knowing] exactly what’s going to happen. You don’t want it to be a night about counting — that was something that me and Lorne thought was really important. We realized that a lot of shows focus on the 30 seconds before and after midnight, but they don’t think so much about the two hours bookending that moment. We knew that Pete would bring something really unique, because I’ve never watched a New Year’s show that had sketches and comedy in a very improvised way that Pete can do.

How much time did you have to prep for the opening act?

We ended up not even having a full dress rehearsal. We rehearsed it that day, and we wrote this show over text message. There were a lot of reasons why we all couldn’t be sitting around a big writers table like we do at SNL, so it was awesome that we were able to work this all out via FaceTime or text, and sending pictures and songs back and forth. I sent him [the Will Smith song] “Miami” and said, “Would you want to open the show with this?” He had a rewrite within the next day.

Talk to me about “Unrealistic Resolutions.”

We had access to the incredible talent over at SNL through Pete and Lorne. That was also why it was so important to take Lorne’s guidance, because he’s so used to being able to merge music and comedy, and that was something we thought would be a standout moment. It was my favorite moment in the show because it almost looks like a very over-the-top, early 2000s music video. It was important that people felt we were really in Miami because of the past few years [of] seeing people doing concerts from home or over Zoom. We wanted something that we hadn’t seen over the last couple of years.

How much improv actually happens during something like this?

The whole show ended up being a test of improvisation because, again, we barely had any rehearsal time. Everything we had planned ended up being flipped upside down. I’m someone that seems like I’ll go with the wind, and I’m a very flexible person, but when it comes to professionalism and structure, I’d like to be well rehearsed and well prepared, and that just wasn’t possible. Once I accepted the reality, I allowed it to energize me. There was a lot of improv … I definitely had no idea that my outfit was going to break! We said, “You never know what to expect with me and Pete,” and that’s what we delivered.

The coolest thing I’ve witnessed was Lorne Michaels rerouting air traffic. We actually lost our [original] location because of COVID, and we found [the new] location a week before [the show], but it turned out to be near the airport. We were having planes flying overhead every seven minutes, which was not ideal for live music. Lorne Michaels got them to reroute the airplane traffic to allow us to have that silence.

Lorne and I thought that this [should] be the most sophisticated karaoke night anyone’s ever seen. Who doesn’t want to go to karaoke with Brandi Carlile and have her sing “Total Eclipse of the Heart”? We wanted people to do songs that the audience at home can sing along to.

Was there anything you couldn’t pull off given the COVID surge?

Usually, people see me with Billy Idol or Joan Jett or Dolly or Elton — I usually perform with people from another generation that have influenced me and inspired me. Obviously it was a vulnerable time for people to be traveling due to COVID. Some of those iconic, legendary artists weren’t able to make the show. I hope this year I’ll be able to have some of those more classic acts as part of the show.

What were some other challenges?

Originally, we were thinking about close to 1,000 people [in the audience], and we ended up having well under 200 — my friends, my family, Pete had a couple of friends come, Lorne’s team from SNL. We had this space that had the capacity to hold thousands, and we didn’t want it to look really bare at home. But we didn’t want to encourage big get-togethers that were unsafe. Then we had the idea that the show would feel intimate, like a party that you would want to try to get into, and it was that kind of hot ticket. You want people at home to have FOMO, and I think we did that — even in the time where we couldn’t have exactly the ideal party that we wanted to have.

Interview edited for length and clarity.

This story first appeared in a June stand-alone issue of The Hollywood Reporter magazine. To receive the magazine, click here to subscribe.