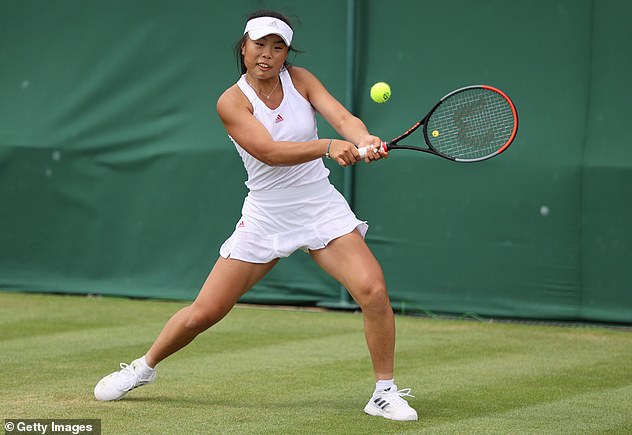 By Dan Ripley for MailOnline

Rising star Mimi Xu has fallen short of becoming the youngest British player to feature at Wimbledon in a century after suffering defeat in the first qualifying round for the prestigious Grand Slam.

Xu lost to Hanna Chang from the United States, falling in straight sets by a 6-4, 6-3 scoreline in 63 minutes.

While the result will be of huge disappointment to Xu, she put in a brave and excellent display to underline her huge potential against Chang who with a world ranking of 269 was always favourite to see off the teenager from Swansea who sits far lower in the rankings at 1147.

Xu, 14, is regarded as a promising talent in British tennis and could be a star in years to come

To reach SW19, Xu would have had to win three qualifying matches and that would have made her the youngest Brit to appear at Wimbledon in the post 1968-Open era, and possibly (based on questionable records) in 100 years.

She would have usurped the likes of British compatriot Annabel Croft who was 15 when she made the main draw in 1981, while American Coco Gauff was just 15 years and 122 days old when she came through three qualifiers at Roehampton to qualify in 2019.

Xu is expected to rise quickly up the rankings in the next few years. She is already tall for her 14 years and powerful enough to see her compete with players up to four years older than her in junior tournaments across the United Kingdom.

Her own expectations are high, having been disappointed last week at the lkley Trophy in West Yorkshire where she was beaten by Yanina Wickmayer, despite being more than twice her age and a former US Open semi-finalist.

Having achieved plenty of success in junior competitions, Xu will now step up to senior events

Her place in Wimbledon qualifying was secured when she claimed the Under 18 British title well ahead of her years back in April.

Naturally, Xu was inspired by Raducanu’s astonishing success in New York last September and recently hit with the British No 1 for an hour-and-a-half at the National Tennis Academy in Loughborough.

‘It’s been really eye-opening,’ Xu said last week. ‘Seeing that if she can win like that, we can do that one day, too.

‘It was really fun being in the moment and she was really nice, really encouraging. That helped me.’