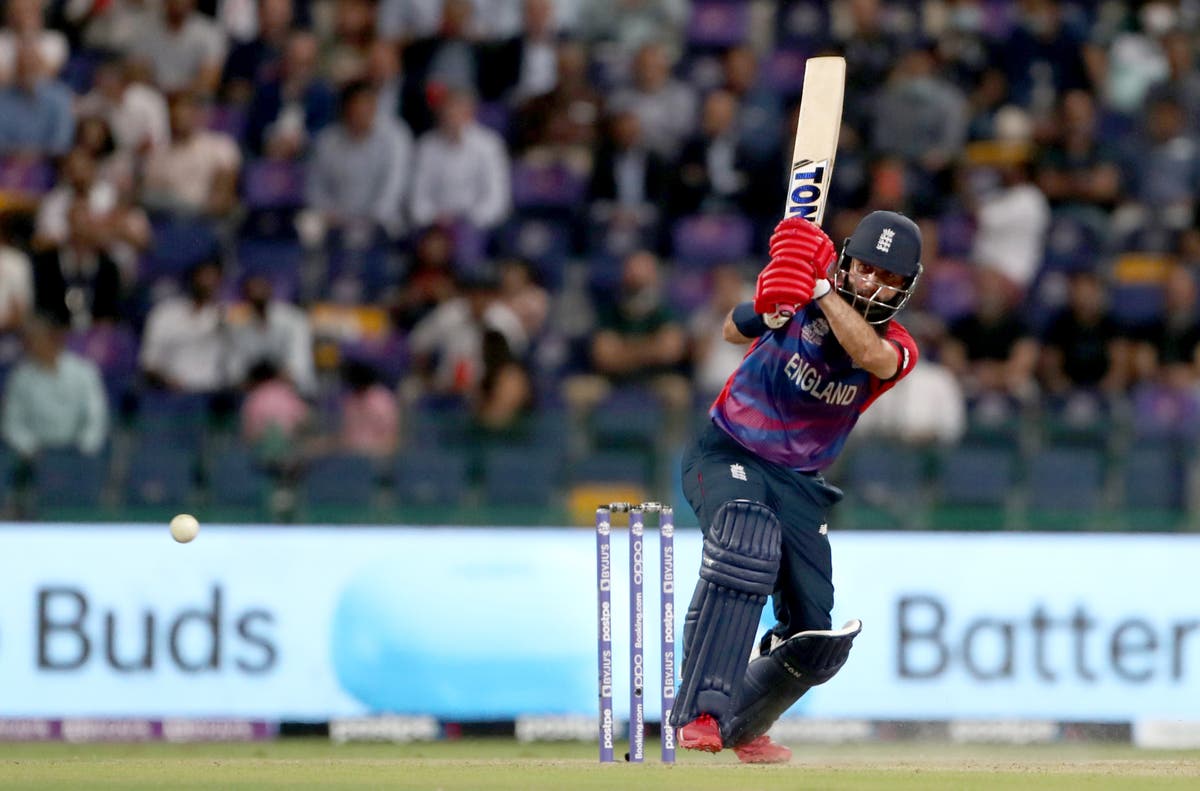 Moeen Ali led from the front with bat and ball as England sent their Twenty20 series against the West Indies to a decider on Sunday following a 34-run victory at the Kensington Oval.

England’s stand-in captain, deputising following Eoin Morgan’s series-ending injury, thumped seven of England’s 15 sixes in a sparkling 63 off 28 balls as the tourists added 59 in the last three overs to post 193 for six.

It was an explosive finish to the innings, with Jason Holder clubbed for four successive sixes by Moeen, who chipped in with impressive figures of two for 28 as the Windies fell short on 159 for five in reply in Barbados.

The hosts required 61 from the final 24 balls but Chris Jordan brought back alongside Sam Billings after missing Wednesday’s loss, and Reece Topley held their nerve at the death to ensure the five-match series goes to the wire.

Moeen was the standout, propelling England after Kieron Pollard used his cutters and nagging lengths on a sluggish pitch to stifle England, who were also grateful for Jason Roy’s 52 from 42 balls at the top of the order.

Roy benefited from being dropped on three by Holder in the second over to share an 85-run stand alongside James Vince who contributed 34 from 26 balls after England were invited to bat first.

While Holder could not cling after stretching out his right hand for a return catch early in Roy’s innings, the former Windies captain was in business later in his first over when Tom Banton clothed to mid-on.

England were stuck in the mud on 15 for one from four overs but Roy exploited the shorter boundary one on side, clearing the Greenidge and Haynes Stand before clubbing another six as England ended the powerplay in a healthier position.

He made a 34-ball fifty before Pollard applied the brakes. Pollard’s cutters and expert lengths were frustrating England’s batters and Roy’s attempt to hit out only caught a bottom edge as he was caught behind.

Vince then miscued a wider delivery off Akeal Hosein to short third man and he now has just one half-century in 16 T20 internationals.

Liam Livingstone belatedly pulled Pollard over midwicket but figures of 4-0-23-1 were exceptional as England sat on 134 for three from 17 overs, having added just 54 from the previous 48 deliveries. Moeen, who had crawled to 20 off his first 16 balls, decided to get after Holder and the ploy worked in electric fashion.

His first six had just enough to get over the shorter boundary but the next three sailed over the rope as he brought up a 23-ball half-century. He celebrated with another couple of exquisitely-timed sixes and while he holed out in the final over as Holder exacted a measure of revenge, Sam Billings slammed the last two deliveries for maximums.

England might have had more than the eight wides they received, with some questionable calls in their innings, but they were under the pump as the Windies raced to 56 without loss from six overs, with Kyle Mayers marking his first match in the series with some brutal hitting as England’s bowlers initially erred in line and length.

Moeen shared the new ball with Topley but was clubbed straight in each of his first two overs by Mayers, who took 16 in three deliveries off the wayward Tymal Mills, including an audacious ramp for a second successive six.

Adil Rashid was a calming influence thereafter. With neither Mayers nor Brandon King willing to take risks against Rashid they were caught in the deep for 40 and 26 respectively attempting to go big against Moeen before England’s premier leg-spinner produced a googly that ripped through the gate of Rovman Powell, who made a ton last time out.

A position of 64 without loss therefore became 78 for three and the asking rate hovered above 15 an over when Pooran opened his shoulders off Livingstone. There were two mighty legside sixes but Pooran then sent a wider, flatter delivery to long-on.

Holder got after Rashid with two leg-side mows for six as he reached 30 for the first time in a T20 international. A grandstand finish looked to be on the cards but Jordan, who has come under scrutiny for how he has bowled at the back end of the innings recently, was sensational as he conceded just seven in the 17th over.

He then took the catch on the boundary which saw Holder dismissed for 36 off Topley as the Windies challenge petered out.