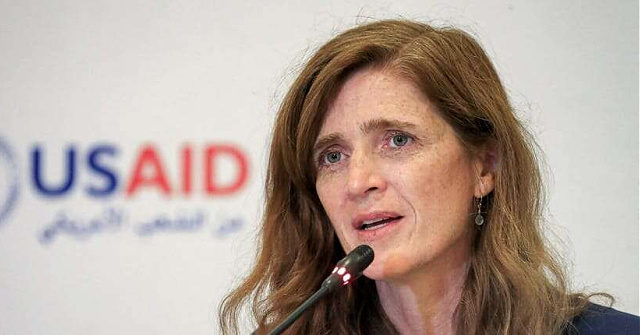 U.S. Agency for International Development (USAID) administrator Samantha Power claimed her agency’s work is “harder today than it was before” the January 6 Capitol riots on the anniversary of the event.

Power characterized the Capitol riots as an attack on democracy and claimed that the lesson of the event was that “democracy must be defended,” according to a letter obtained by Breitbart News.

“A violent mob, consumed by lies and incited by peddlers of conspiracy theories, breached our nation’s Capitol in an attempt to overturn the will of the people and prevent a transfer of power that is a hallmark of our democracy,” Power wrote.

Power said those involved in the riots did “grievous harm” to “confidence in the strength of American democracy.” She further claimed the event caused damage to the country’s global standing among other nations and the “importance of nonviolent political transitions.”

She emphasized the impact January 6 had on America’s global standing once more, claiming, “We have since seen autocrats wield the events of January 6 to diminish America’s leadership and delegitimize our efforts to support global democracy.”

As head of USAID, Power is one of America’s representatives on the world stage. Her duties include monitoring the United States’ response to “conflict and humanitarian crises; and democratic backsliding.”

Power is a longtime diplomat who previously represented America internationally while serving as U.S. Permanent Representative to the United Nations during the Obama-Biden administration.

Powers’ views on January 6 mirror her former boss, former President Barack Obama. Obama claimed, “our democracy is at greater risk today than it was back then,” on the event’s anniversary.

Power similarly alleged that the events of January 6 made her job at USAID more challenging than it would otherwise be.

“There is no question that our work at USAID to promote democratic processes and ideals is harder today than it was before the insurrection,” she wrote.

Power described democracy as an “ongoing journey,” then posited that the United States’ “divisions and setbacks” are good reasons for the country to address alleged domestic threats to democracy.

Our own nation’s divisions and setbacks should encourage us to both confront the urgent threats to democracy at home and to approach others on the journey with humility. But we should never doubt the virtue of our pursuit.

She commended Congress for certifying the 2020 election results following the breach of the Capitol. Power concluded her letter by claiming the lesson January 6 teaches us is “that democracy must be defended.”