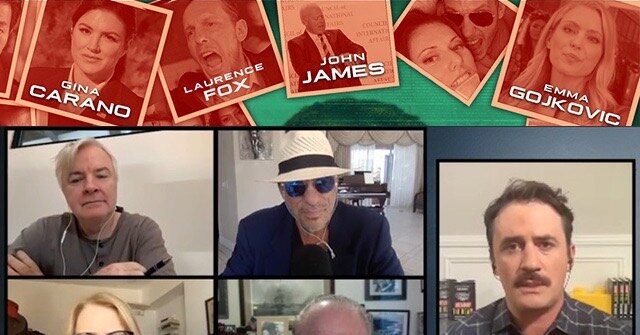 When asked about the film’s genesis, McAleer quipped, “This film started on our back patio, just in Venice, California, a crack pipe throw away from Hunter Biden’s residence, at the time.”

McElhinney explained the decision to make a feature film. “An entertaining film that people can easily watch and will be madly and wildly entertained by,” she said, is a superior means to share the “suppressed story” of Hunter Biden’s life when compared to documentaries or political speeches.

McAleer remarked, “If Hollywood and the media did their job, we would be unemployed,” referring to widespread news media censorship, denial, and suppression of reports detailing the contents of Hunter Biden’s laptop ahead of the 2020 presidential election.

McAleer and McElhinney reflected on their founding of the Unreported Story Society, which has produced both documentary and drama films, plays, and podcasts dissenting from left-wing and partisan Democrat orthodoxies maintained by the largest entertainment producers and distributors.

James characterized Breitbart News’s distribution of the film as the “future” of direct-to-consumer entertainment to bypass conventional “gatekeepers” of films and shows.

“You guys at Breitbart taking this step is the right thing to do, because I think this is the future,” he considered.

Davi described My Son Hunter as a rebuke of Big Tech censorship and news media suppression of information regarding Hunter Biden’s laptop and behavior.

“It’s like a great middle finger to Big Tech and the establishment who tried to bury the story, and the media and Hollywood,” he remarked, “because they’re not forthcoming in anything.”

Hunter Biden is the subject of a brand new narrative film, My Son Hunter, marking Breitbart’s expansion into film distribution. The film was directed by Robert Davi (Goonies, License to Kill, Die Hard) and stars Laurence Fox (Victoria, Inspector Lewis, The Professor, and The Madman) as Hunter Biden; Gina Carano (The Mandalorian, Dead Pool, Heist) as a Secret Service agent; and John James (Dynasty) as Joe Biden. It was produced by Phelim McAleer and Ann McElhinney (Gosnell movie, FBI Lovebirds: Undercovers) from the Unreported Story Society. The film is available RIGHT NOW for Streaming and Downloading at MySonHunter.com.

The trailer below has been viewed almost 5 million times across social media.