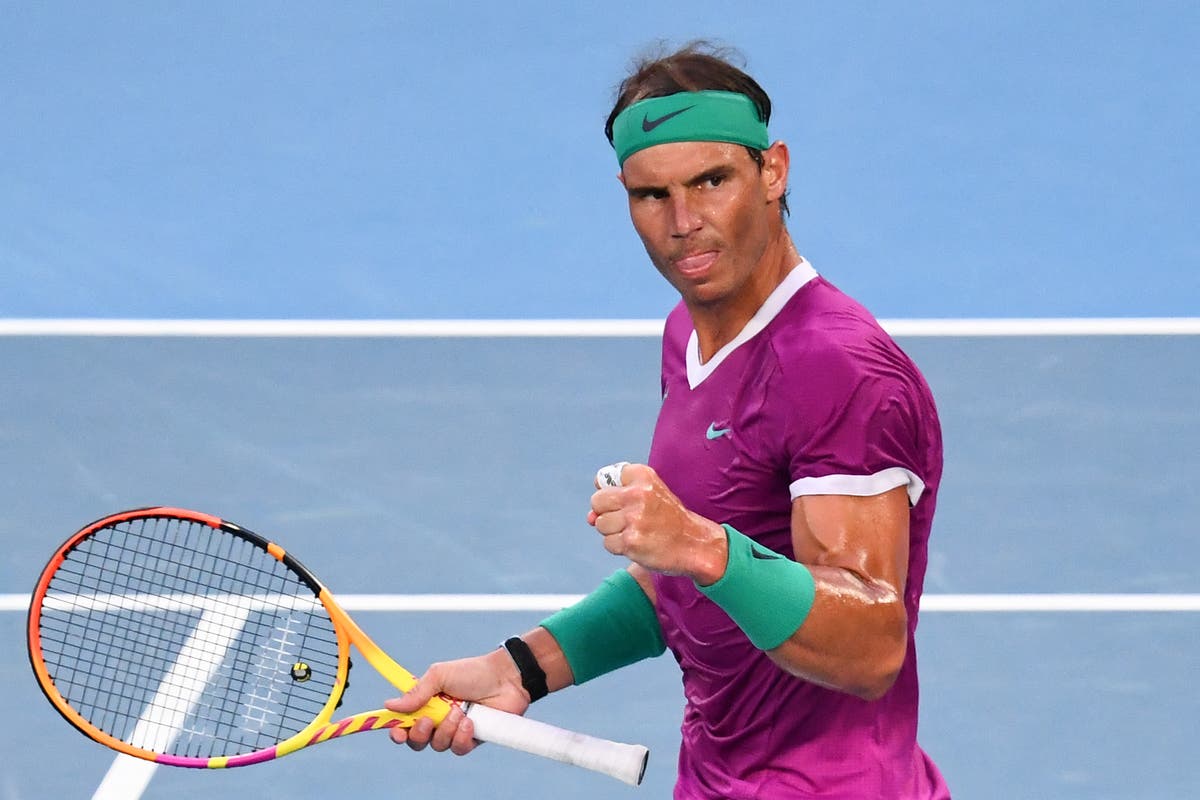 Follow live updates from the Australian Open men’s final as Rafael Nadal takes on Daniil Medvedev in a bid to make tennis history. If the Spaniard wins the match he will break the record for the most grand slam wins in the men’s game. He is currently tied with Novak Djokovic and Roger Federer on 20 slam titles but outclassed Matteo Berrettini over four sets in the semi-finals on Friday after overcoming a gruelling five-set battle against Denis Shapovalov.

In order for Nadal to break the record he will have to go through Medvedev, who is in great form. The Russian, who entered the draw as the highest seed after Djokovic’s withdrawal, is aiming to win consecutive grand slams after already clinching the US Open last September. Medvedev defeated Stefanos Tsitsipas in four sets in a bad-tempered semi-final on Friday but is likely to face a sterner test in the final as Nadal bids to make history.

The focus may be on Nadal to win the final but he said after his semi-final victory over Matteo Berrettini he’s just grateful for the chance. He said: “For me it’s all about the Australian Open more than anything else, no? It’s just an amazing event. I’ve been unlucky with injuries and other times I play amazing finals with good chances. But I never thought about another chance in 2022.” Follow live updates from the Australian Open final:

Medvedev making more than 80 per cent of his first serves. That’s a statistic even Nadal in his prime would have struggled to combat.

And the Spaniard starts his latest service game with a double fault. The first of the match.

This time it’s Medvedev who calls for the ball girl to wipe his side of the court down. Not just Nadal sweating all over the place then.

Nadal makes a positive start after dropping his serve as he fires a brilliant forehand crosscourt which Medvedev can’t return over the net.

Not this time though. Nadal goes into the top of the net with a backhand. And an ace takes Medvedev 30-15 in front.

Another first serve from Medvedev – he has only had to use two second serves so far. 40-15 as Nadal fails to return inside the tramlines.

But Nadal fires in another sharp forehand which Medvedev has no answer to. 40-30.

Medvedev holds though. Nadal goes long with a forehand under pressure.

It’s all getting on top of Nadal already. Medvedev showing his class from the word go.

Nadal needs to find more first serves if he is going to avoid this constant Medvedev pressure.

The second seed takes the lead again on the Nadal serve with a lovely backhand down the line.

And he makes a brilliant hooked backhand as Nadal charges to the net! Unconventional but it dropped inside the line!

That backhand is long from Nadal. He can’t find a way through the brilliant defence of Medvedev. 0-40. Three break points.

Another wild backhand from Nadal and Medvedev breaks to love.

Perhaps not. Two wild Nadal returns see Medvedev move in front. But a long forehand from the Russian then brings up 30-30.

Medvedev forces the issue with his powerful groundstrokes and Nadal can only hook the ball up and a couple of yards wide of the tramline.

And another ace seals the game for Medvedev. A much quicker hold than either of Nadal’s.

Nadal may have come through that battle, but surely the pressure will tell eventually? Medvedev already looking the dominant player in this match.

Nadal calls for the ball girl to wipe down the floor as he is already sweating profusely. Medvedev causing that with relentless pressure at the start of the match.

Nadal goes into the net. Another break point.

Big serve from Nadal saves his skin this time. Deuce once more as the game enters its ninth minute. And a beautiful slice hands the Spaniard the advantage as Medvedev fails to get it back.

That’s the hold! Nadal defends a powerful Medvedev backhand before clinching the point and game with a vicious forehand down the line.

The rallies are going long already on the Nadal serve. This time it’s the Spaniard who blinks first with a wayward slice at the start of the third game.

Some huge hitting from Medvedev! A 26-stroke rally sees the Russian work Nadal all over the court before punishing him with a backhand down the line. Superb. 0-30.

Oh that’s remarkable! Another backhand down the line has Nadal in all sorts of trouble. He just about gets it back as Medvedev looks to finish him off at the net. But he smashes his shot straight at Nadal and the Spaniard somehow flicks it back and onto the line!

Some wonderful net play from Nadal! He answers Medvedev on two occasions, finishing with a volley. 0-30.

Not this time though. Nadal with the unforced error and Medvedev has the break point.

Wonderful play from Nadal. Comes into the net off the forehand and his deft hands enable him to finish the point off with another lovely volley.

An eight minute opening game. We could be in for a long old night.

Nadal goes for a backhand winner at the beginning of Medvedev’s first service game but he puts a little too much on it. The return of serve is then long as Medvedev races into a 30-0 lead.

A routine forehand goes long from the Russian, but another crosscourt effort from Nadal then drops just over the tramline for 40-15.

Nadal to serve first then.

And the Spaniard kicks things off with a forehand winner. The perfect way to start.

A forehand then goes awry for 15-15, but a powerful groundstroke from Nadal restores his advantage.

Medvedev skews a looping shot well off target as Nadal dictates the tempo at the back of the court early on. The Russian then wins his first longer rally as Nadal goes into the net. 40-30.

A tense 20-plus stroke rally ends with Medvedev clipping the top of the net. Fortunately for Rafa it does not creep over. And Nadal forces the error from Medvedev with a second serve.