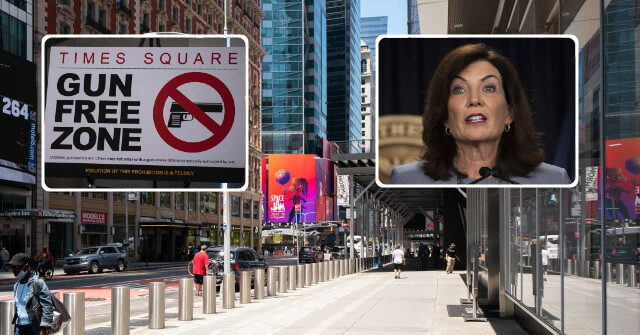 New York Gov. Kathy Hochul (D) and the state’s Democrat-run legislature responded by enacting numerous new gun controls, including a list of “sensitive” areas where the carrying of guns would be prohibited.

CNN noted that Times Square is now a designated “sensitive” area. The ban on carrying a gun in that area takes effect on Thursday.

“Gun-Free Zone” signs are supposed to be posted around Times Square on Wednesday, even as lawmakers continue to work on the precise boundaries of the gun-free area.

The Supreme Court issued a reckless decision removing century-old limitations on who is allowed to carry concealed weapons in our state — senselessly sending us backward and putting the safety of our residents in jeopardy. Today, we are taking swift and bold action to protect New Yorkers. After a close review of the NYSRPA vs. Bruen decision and extensive discussions with constitutional and policy experts, advocates, and legislative partners, I am proud to sign this landmark legislative package that will strengthen our gun laws and bolster restrictions on concealed carry weapons.