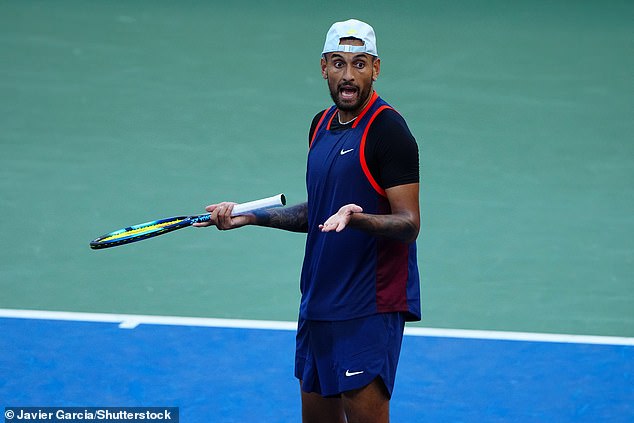 Drama at the US Open as Nick Kyrgios tells umpire a fan is smoking MARIJUANA, gets warned for spitting and tells his support team to ‘go home’ in furious outburst full of F-bombs

The beginning of a Nick Kyrgios implosion is well underway at the US Open; with the Aussie complaining to the chair umpire he smelt marijuana coming from the crowd, spitting on the court and letting fly with a continual series of expletives at his box.

Kyrgios, who is facing Frenchman Benjamin Bonzi in the second round, won the first two sets before the first signs of a meltdown began to show in the third set, which he lost 4-6.

He complained to the chair umpire that he could smell marijuana while he was trying to play, which commentators said ‘they’d never heard of before’.

‘It was f***ing marajiuana. It was smoke. Obviously I’m not going to complain about food,’ Kyrgios could be heard saying in the on-court microphone.

‘Obviously when athletes are running side to side and they have asthma, it’s probably not ideal.’

He was then issued with a code violation for abusing his own team, and could be seen releasing a huge spray of spit; earning a conduct warning and disgusting fans in the stadium and watching from home.

The wheels are well and truly starting to come off, and Channel 9 commentator Todd Woodbridge said it was high time someone in his supporter box took action.

‘At some point the people who are sitting in his players box need to take some action,’ Woodbridge said on the broadcast.

‘That action should probably be standing up and walking out. They’ve got nothing to do with what goes on on the court. That is up to Nick.’

Nick Kyrgios’ girlfriend Costeen Hatzi watches on at the US Open