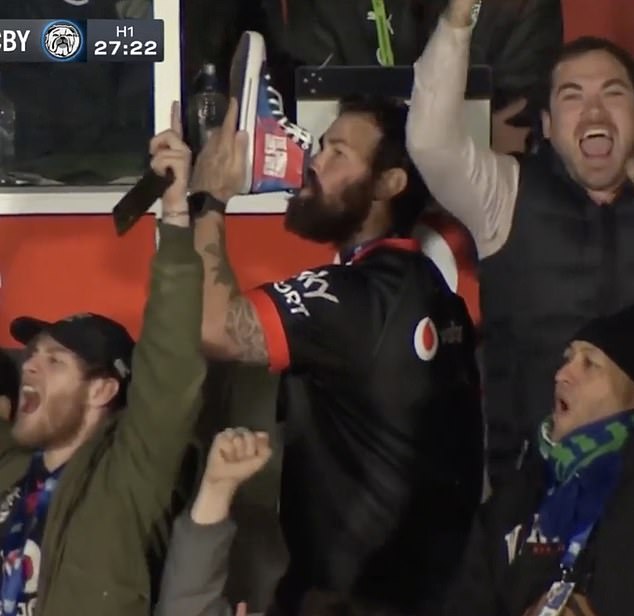 Warriors fan cops LIFETIME ban… for doing a shoey! Thousands of supporters sign petition to see harsh sanction overturned after Kiwi brickie was booted out of Mt Smart Stadium for his WILD celebrations during Friday’s win over Canterbury

A New Zealand Warriors fan has been handed a lifetime ban after doing a shoey during his side’s victory over Canterbury, with thousands of supporters calling for the club to reverse their decision.

Calley Gibbons, a 31-year-old brickie from Auckland, has gained cult-hero status among the fanbase after being seen guzzling beer from a boot right in front of Stacey Jones’ coaches box on Friday night.

Gibbons, who has been dubbed Roger Shoey Vasa-Shack among supporters, was swiftly escorted from Mt Smart Stadium and informed that he had been banned for life from the venue.

The 31-year-old has been spotted frequently since the Warriors’ return to New Zealand, but was thrown out after only having one ‘shoey’ on Friday.

Gibbons is not facing any charges and told the Sydney Morning Herald that he was not intoxicated and had bought the beer from inside the venue. He ended up at pub down the road where he did a shoey every time his team scored a try. The Warriors scored seven tries on the night.

A petition has already been launched in the wake of Gibbons’ harsh ban, and has earned over 3,000 signatures in support of the popular fan.

‘I was evicted from the stadium and the security guard escorted me out and told me I had a lifetime ban,’ Gibbons said. ‘Your guess is as good as mine as to why I was kicked out. It’s just wrong.

‘I told them I had purchased the beer from the venue, I was not intoxicated and it was my choice as to how I consumed the beer.

‘I’m not sure if one particular security guard had it in for me. He told me, ‘You won’t be coming back here in this lifetime’.

Calley Gibbons has gained cult hero status and 4,000 fans have signed a petition

‘I’d only done the one shoey. At least I got one good shoey in. I went to a bar and did a few shoeys every time the Warriors scored.’

Gibbons has sat beneath the coaches’ box since 2006 and his father, Ron Gibbons, spent most of his life heavily involved with the club and was friends with Jones.

The Warriors say they were unaware that Gibbons had been kicked out, and sources claim that stadium officials took exception to an unauthorised camera crew following Gibbons around without their knowledge.