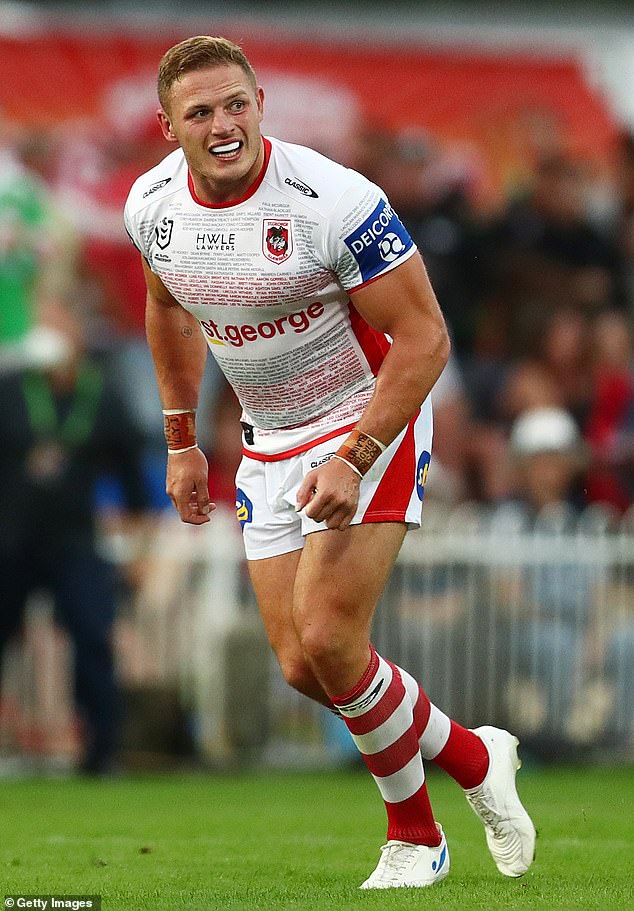 St George Illawarra star George Burgess will be interviewed by police over the alleged sexual touching of a woman.

The woman made the allegation to police in Mascot in Sydney’s inner-south last week. She claims the sexual touching occurred in the same suburb.

The 29-year-old’s lawyers are in contact with police about the allegation and the Dragons have been informed, The Daily Telegraph reported.

A spokesman for St George said the club had been alerted to the matter by the NRL’s Integrity Unit.

Her allegation emerged just three days after Burgess played for St George in a 20-16 loss to the Penrith Panthers on Friday night.

The 29-year-old returned to the NRL after an eight-game stint in 2020 with the British Super League’s Wigan Warriors.

He previously played 149 league games for the South Sydney Rabbitohs from 2012 to 2019.

His brother Sam, 33, also played for the Rabbitohs and won the Clive Churchill Medal for man of the match in the 2014 Grand Final.

He arrived back in Australia and went into hotel quarantine in late July, after signing on to play with the St George Illawarra Dragons until 2023.

Rugby league star George Burgess is pictured with his wife Joanna, with whom he has three children

The family, however, had to serve the quarantine period in separate hotels, with George and his son Boston, four, staying in one hotel, while his wife Joanna and their other two children, Birdie and Blainey, were quarantining in another.

The powerful forward recently underwent surgery for a recurring hip injury as he seeks to revive his career in the NRL.

‘Hopefully (I’ll) bounce back to my best after the recent surgery by getting super fit again and playing good footy,’ he said of his return to the NRL.

George also has a twin brother, Tom, who plays as a forward for the Rabbitohs.

The St George forward has three children with his model wife Joanna, a former model.