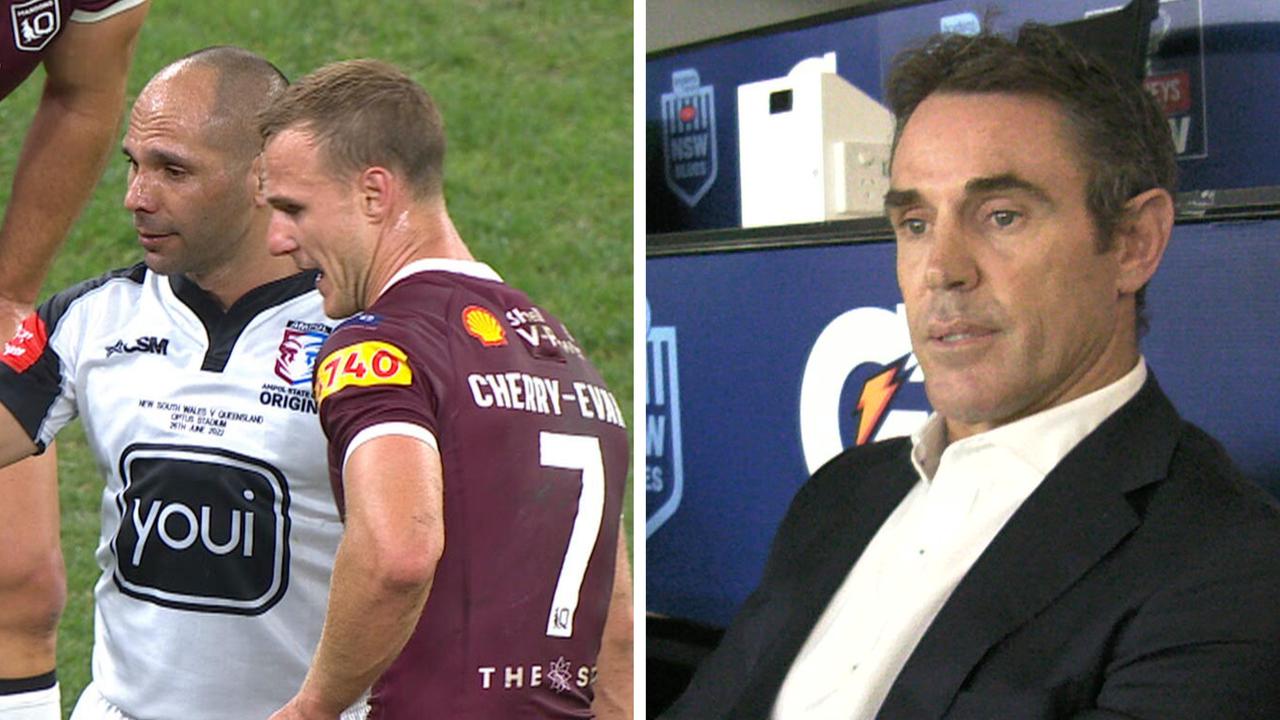 Daly Cherry-Evans’ pleas fell on deaf ears as Felise Kaufusi was sent to the sin bin in a huge call that swung Origin II — and completed a coaching masterstroke by Brad Fittler in the eyes of many.

Queensland was leading 12-8 heading into the final five minutes of the game but was pinged for four-straight ruck infringements, including that from Kaufusi in the 38th minute.

That was the final straw for referee Ashley Klein, who gave Kaufusi his marching orders for slowing down the play-the-ball.

QLD PLAYER RATINGS: Munster brought back to earth as rookie has night to forget

‘GEE UP’: Origin greats blow up at sin bin drama as Freddy gets his wish

“This is huge. This is massive,” Channel 9’s Mathew Thompson said in commentary.

“Wow. Repeated infringements. And Felise Kaufusi will head to the sin bin here. NSW with repeated sets of six up against the Maroons line.”

Thompson said Queensland coach Billy Slater was “as animated” as he had ever been in the series after the big call.

It would have been music to Fittler’s ears after the Blues coach complained after Game 1 about Queensland dominating the ruck and limiting his side’s go-forward in the process.

Cherry-Evans though was less than impressed, pleading to Klein: “They’re all different”.

Fittler said the difference between the two teams in Game 1 was the ruck speed, accusing the officials of letting Queensland get away with too much.

“It was a high-pace game – it’s always like that,” Fittler said in his Game 1 post-match press conference.

“They got in tight and held on and Ashley [Klein] didn’t want to give penalties away… They worked hard there and definitely won the ruck.”

Weighing into the drama at halftime on Channel 9, both Phil Gould and Paul Vautin were critical of the decision.

“I hate sin bins at the best of times let alone in an Origin,” Gould said.

“I don’t think there was ever a warning here. He just got four or five in the space of a minute and then just had enough and sent him off. They will justify that.

“But I don’t think he should have got to that point. All of those six agains he gave to get them into sin bin territory, you need a magnifying glass to work out exactly what had gone wrong or why it needed to be penalised.

“The fact that they are six agains and not penalty kicks means they are giving them away like smarties. You don’t need it. It is Origin football.”

Klein ruled four set restarts, including the one that saw Kaufusi binned, with the first on Harry Grant for a ruck infringement and second on Cherry-Evans for being inside the 10 metres.

The next saw the Queensland halfback pinged again for being inside the 10 metres while Kaufusi was pulled up soon after for slowing the play-the-ball.

Asked about the referee’s performance after Game 2, Fittler wanted to put the focus on his own players.

“The time in the play the ball were a lot more similar. But it came down to our effort,” Fittler sad.

“I thought they pushed the ref and he allowed it. But on our side it was more our effort so it was a criticism of us more so than anyone else and I thought they were a lot better tonight.”

On the sin-binning Fittler added: “I thought what happened was we were trying to get the better of them and the only way they were keeping up was giving away penalties so I thought it was warranted.”