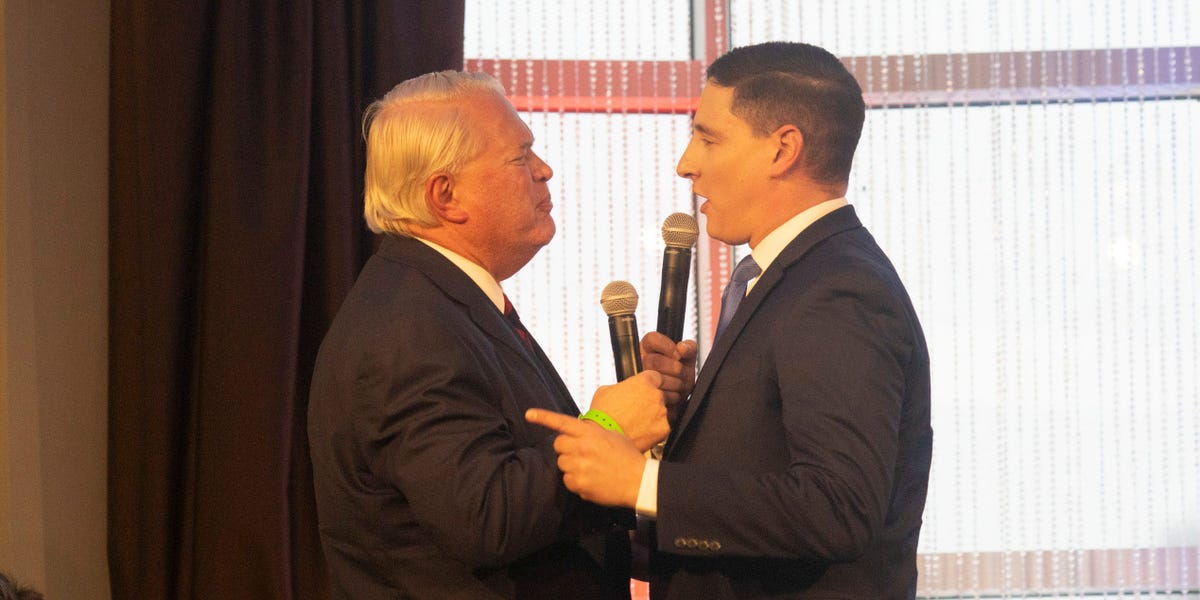 Two leading candidates in the Republican primary for the US Senate race in Ohio squared off during a heated exchange at a debate on Friday evening in Columbus, Ohio.

Video of the debate showed Josh Mandel, former Ohio state treasurer, stand up and get in the face of Mike Gibbons, an investment banker, while trying to confront him about an investment.

Mandel stood up as Gibbons told him “you may not understand this” because “you’ve never been in the private sector your entire life.”

“Two tours in Iraq, don’t tell me I haven’t worked,” Mandel, a Marine Corps veteran, said as he got nose-to-nose with Gibbons, who can be heard saying “you don’t know squat.”

During the exchange, the crowd can be heard booing as both men tell each other to back off. Mandel can be heard saying: “You watch what happens.”

The word “pussy” can also be heard, but it’s not clear in the clip who said it. Mandel eventually sat down.

The debate was attended by other GOP primary candidates JD Vance, Matt Dolan, and Jane Timken, who looked on as the exchange unfolded.

“Josh Mandel is unhinged, unfit, and flailing – because he’s losing. He is only a professional at one thing: running for office,” Samantha Cotten, a spokesperson for Gibbons, said.

“He doesn’t have the temperament, experience, or fortitude to be a US Senator and Ohio voters got a first-hand look at just how unprepared Josh Mandel has become and that will be reflected on the ballot on May 3,” she added.

Cotten also told Insider that Mandel was the “aggressor.” When asked about the word “pussy,” she said Gibbons was not the one to use that word.

Mandel and his campaign did not immediately respond to Insider’s request for comments.

Gibbons and Mandel are the two frontrunners in the race, according to polling. They are running to replace Sen. Rob Portman, who is retiring.

Vance commented on the exchange during the debate, taking aim at Mandel’s comment about his service.

“I think the way you used the US Marine Corps, Josh, is disgraceful,” Vance, also a Marine Corps veteran, said, prompting applause from the audience.

“This guy wants to be a US Senator, he’s up here: ‘Hold me back! Hold me back! I got two tours in the Marine Corps.’ What a joke,” he continued.