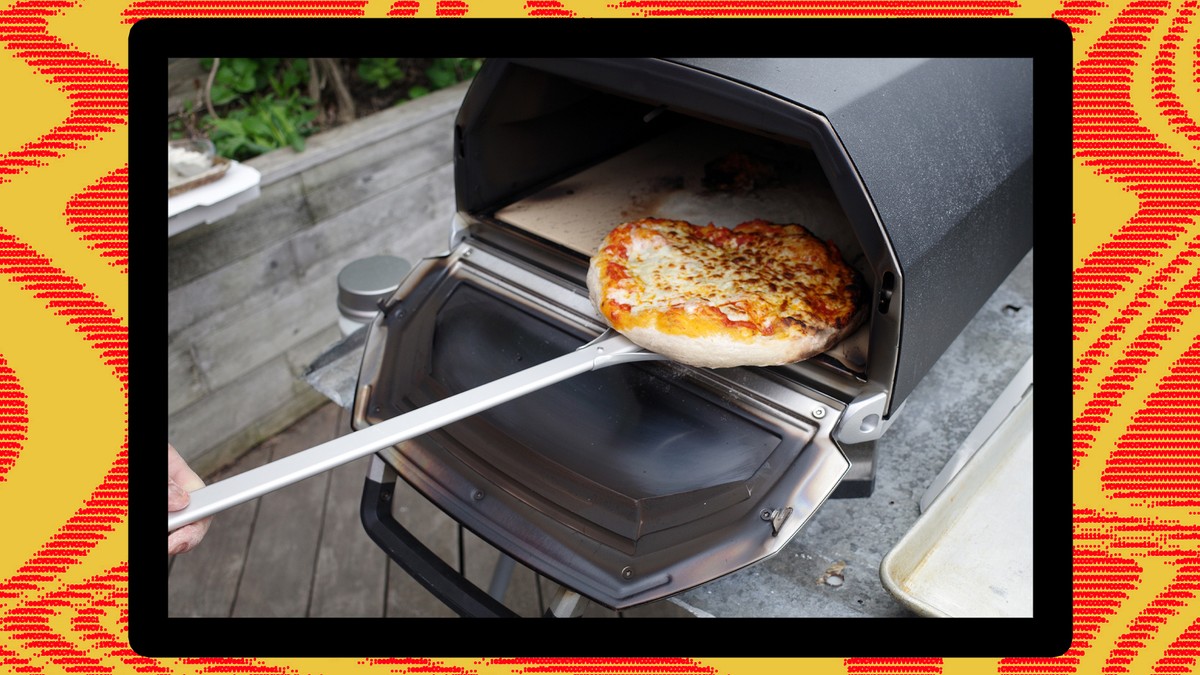 There’s an old saying that pizza is like sex: When it’s good, it’s really good, and when it’s bad, it’s still pretty good. Any adult who’s had some genuinely cringe and awkward sex will dispute the latter part of that saying, but the takeaway about pizza itself is true. It’s hard to go wrong with the true Circle of Life: a landscape of stretchy mozzarella cheese and tangy tomato sauce on a doughy, chewy crust. When you take a bite of a seriously A+ pizza, it can become a core memory, and when pizza is really top-notch, it’s like the final Vince McMahon face—virtually orgasmic. (Perhaps even literally!)

But, unlike some foods and dishes that are characteristically better when homemade, pizza—especially a proper, traditional Neapolitan pizza—can be tricky to replicate from scratch. If you’re a few beers or joints deep, maybe a DiGiorno or CPK frozen jawn will do… but if you’re a gourmand freak like our pizza-obsessed Rec Room staff (two of whom are from Jersey; don’t even get them started on pizza), you want the best.

Unfortunately, not all of us have been able to find a home with a massive, wood-fired pizza oven stationed in the backyard. That is, until we snagged the Ooni Karu 16 pizza oven. Ooni is one of the top home pizza oven brands on the market, alongside Gozney’s popular Roccbox—more on that here, as well as info on all the best home pizza ovens—and is known for its user-friendly, backyard-ready pizza ovens that can quickly reach scorching temperatures up to 950 degrees Fahrenheit, blazing enough to quickly cook a Roberta’s-worthy pie to bubbly-crust perfection in literal seconds. And while Ooni’s pizza oven price tags start at $349 for the brand’s basic, wood-fired model and reach up to $799 for the propane- or pellet-fueled Karu 16, that’s still considerably cheaper than dropping almost three Gs on a brick backyard pizza oven—and it requires no installation, and can be put together by a couple of jabronis in the time it takes to watch an episode of Frasier. Most importantly, it promises restaurant-quality pizzas that are way beyond the scope of what’s available mass-produced in the frozen aisle. We’re talking instant, DIY pizzaiolo status.

When we got the opportunity for a Karu 16—the highest-end and most tricked out Ooni pizza oven model—to rock our world (aka our office rooftop), we were stoked to give it a shot, but also curious about whether it would satiate the high standards of our hungry, pizza-obsessed team members. So after taking it for a serious spin through a variety of pizzas, here’s our honest review.

The box the Karu 16 came in was big. Like, it makes sense when you think about the circumference of a good-sized pizza, and what would need to contain both that pizza and a roaring fire to cook it. But, it was still a little intimidating to crack open the dresser-sized box and pull out all of the components, and there are quite a few.

However, the great news is that once all of the parts are out, this thing comes together surprisingly fast—no special tools required. There were two of us working on it in tandem, and we assembled it in less than 30 minutes, but it could definitely be a one-person job. After we set it up and had a chance to marvel at our accomplishment, we were struck by how… literally beautiful it is? There’s something about the sleek, metal, turtle-like frame that fits any and every al fresco setting, whether you’re cranking out a few pies on a rooftop overlooking a scenic river (well.. the East River) like we were, or perching it precariously on your studio apartment’s fire escape (please, god, do not do that).

Some pluses of the Karu 16 model, specifically, include the ability to use either propane or wood pellets for heat (we went with the latter, for a more toasty flavor); a hinged, transparent door that traps in heat but lets you watch your pizza cook; as well as the included, battery-powered digital thermometer, which was also easy to get going, letting you know the internal temperature of the oven with a single touch. Tracking your oven temps is especially crucial when it comes to pizza, since at such high temperatures (500 to 900 degrees Fahrenheit for making a perfect Neapolitan-style pie), mere seconds at the wrong heat can turn a beautifully charred crust into a burnt, nightmarish brick. Thankfully, the only pizza we made that came out a little on the charcoal-y side was the first one, and frankly, it was still gosh darn gorgeous! More on that in a sec.

An hour out of the box, and it’s ready to go. Photo: Hilary Pollack

Once the oven was set up, we opened the hatch in the back, poured in some wood pellets, and started cooking. Ooni recommends doing a test run to burn off any residual chemicals from manufacturing that may be in the oven, and then completely letting the oven cool before firing it up again. We’re not the most patient bunch, so we sort of did this—we let it get up to a very reasonable 700-something degrees Fahrenheit before giving it a break, then got to the pizza-making.

L’industrie Pizzeria, one of our favorite neighborhood pizza spots, was kind enough to hook us up with their phenomenal pizza dough, but there are recipes included in the Ooni product literature for a classic dough and some other accoutrements you may wish to have on hand. We also loaded up on Rao’s sauce and mozzarella, prosciutto, basil, and burrata, as well as Miyoko’s Creamery vegan cheese for our dairy-averse content strategist Jamie Steidle (honestly, it was great). When the fire was rockin’ and rollin’ and the digital thermometer told us that we were in the 800-ish degree zone, we were ready to let the pies fly. (By the way, don’t forget to grab a peel and turner for making sure you can get your pizza in and out of the blazing-hot oven without scorching your little fingies off.) Our first pizza was a bit of an experiment in terms of how much to mess around with it and how long to leave it in, but when it finally emerged and we were able to take our first bites, we were unanimously wildly impressed.

Our first born son. A little crispy on one side, but not bad for beginners and damn well DELICIOUS. Photo: Hilary Pollack

What was rad about the Ooni Karu

One of the first things we were impressed with was the Ooni’s easy setup. Even for us, erm, less engineering-inclined folks, it was a very quick and problem-free process, and it came with an Allen key and a screwdriver, which are the only tools needed for assembly. But the ease doesn’t stop with setup—operating the Ooni is also a snap, and the simple, straightforward instructions definitely lessened the intimidation factor. Basically, if you’re using the wood-burning function, you just have to make a little fire in the rear compartment, which has a removable cover for loading with wood chips, vine trimmings, or your fuel of choice.

It’s genuinely hard to screw up much here (although we did manage to forget to open the flue of the chimney, but that was easily remedied, and no pizzas were harmed to the point of inedibility in the making of this article), as the design is modern and high-tech but also totally intuitive and, aside from the thermometer, analog.

Then, it’s just a matter of topping off your fire as you go to maintain your desired temperature for primo pizza making. The pizzas really do cook super fast; even when we were running low on fuel and the temperature dropped into the 600-700 degree range, cook time was still well below five minutes.

Once you’ve let the Ooni completely cool off, you can quickly clear out burnt material with the removable ashtray. The best part? There’s no cleaning required. Sure, you can take a damp paper towel to the door windows if you’d like, but since the Ooni gets so ridiculously hot, it’s actually self-cleaning, per the instructions.

Also, it’s probably worth mentioning that using this thing was just… super fun! Between fueling the fire like Thomas the Spank Engine, choosing toppings, watching the temperature climb, and pulling out A+ ‘za, it was a delight to use, start to finish.

What was tricky about the Ooni

While almost everything about the Ooni Karu 16 is super intuitive, for first-time users, nailing down your flame when using the wood-burning function can be tricky. We didn’t have enough fuel on hand to get the oven up to the 950 degrees Fahrenheit it can reach, but it still worked great in the 700- to 800-degree range. However, we ran into some trouble when trying to keep the oven hot enough when we were running low on wood and were burning smaller chips and vine trimmings, but larger, solid pieces of wood or other approved fuels will definitely help keep your temperature steady. Despite the initial head-scratching, though, we still managed to keep the oven over 700 degrees Fahrenheit—and we cranked out some truly delicious pizzas to boot.

Additionally, at $799, the Karu 16 is pricier than some of the other options in Ooni’s arsenal—although it feels clear that you’re getting the top-of-the-line model.

Yeah, we were cutting it with the scraper. Y’all, the pizza was so good. Photo: Hilary Pollack

TL;DR; Is the Ooni Karu 16 pizza oven worth it?

If you know you’re going to be making pizzas at home on the reg, the Karu 16 is well worth it, despite its higher price tag than some of the other Ooni models. The digital thermometer and fuel source versatility are clutch, and this appliance feels built to last.

If you don’t plan to be firing this thing up every weekend during the outdoor-dining months, it might be wiser to go with the Karu 12, which is also multi-fuel, but priced at a comparatively affordable $399 since it’s smaller and has fewer bells and whistles. Just know that you’ll also have to purchase a separate thermometer to optimize your pizza cooking times, and that you won’t be able to see your pizza through a window while it’s getting all melty and bubbly, so there’s more room for error.

The Karu 16 truly does the work for you—no ticket to Naples required. Just get ready to turn into the pizza oven equivalent of a “car guy,” who needs to show this baby off to all your friends.

The Ooni Karu 16 pizza oven is available at Ooni, Amazon, and Bloomingdale’s.