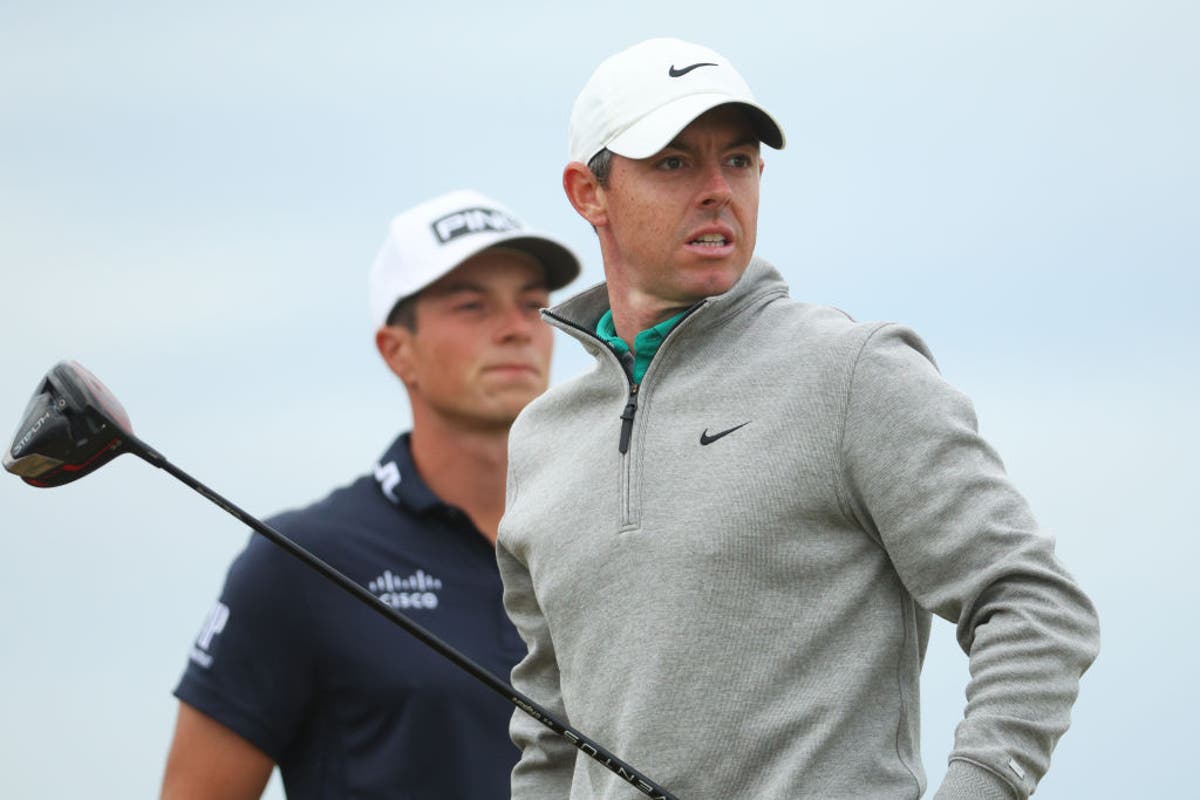 Was This Tiger Woods’s Final Trip To St. Andrews?

Rory McIlroy has the chance to end his eight-year major drought and capture golf’s “holy grail” as he takes a share of the lead into the final round of the Open Championship at St Andrews. McIlroy is joined at the top of the Open leaderboard by Viktor Hovland after the pair shared a thrilling battle on Saturday, with both players shooting rounds of 66 to move four shots clear of the chasing pack.

McIlroy and Hovland will again head out together, this time in the final group, but in front of them is a large group of star players who will look to put the pressure on. Australia’s Cameron Smith, who led into the weekend, is four shots back alongside Cameron Young – with world No 1 Scottie Scheffler and former Masters champion Dustin Johnson also in contention.

England’s Matt Fitzpatrick and Tommy Fleetwood will also hope to give chase, but the focus will be on McIlroy as he looks to win his fifth major title and add to his previous Open Championship from 2014. It doesn’t get bigger than winning the Open at St Andrews, though, especially on the 150th year of the Championship. “I’ve got myself in a great position after three days,” McIlroy said. “I finished off enough golf tournaments in my time to feel like I know what to do.”

Follow for live updates from the Open and the latest leaderboard at St Andrews, below:

Rory McIlroy with huge cheers on the first. Incredible atmosphere.

The Northern Irishman blasts an iron down the fairway and he’s off in pursuit of major No 5.

Viktor Hovland almost clips McIlroy’s ball with his tee shot, it runs about five feet past.

A chance for McIlroy to put the pressure on perhaps?

Cam Smith looking to bounce back after a disappointing third round, it’s a tough task, but four back, he is trying to become the first Australian player to win The Open since Greg Norman in 1993.

While the last Aussie to win an Open here at St Andrews was Kel Nagle in 1960.

The Open 2022: Fleetwood starts with a birdie

Fleetwood gets off to a flier. A birdie at the first sees the Englishman move to -10. His playing partner Johnson stays at that mark as his birdie putt pulls up no more than a couple of inches short of the hole.

The Open 2022: Spieth birdies the second

Jordan Spieth would have to produce a hell of a round to force himself into contention but he’s made a fine start at least, with a birdie at the second taking him to -9.

The Open 2022: Kaewkanjana into fifth

Kaewkanjana bags himself another birdie at 16 and he’s now at -11 and into a tie for fifth. His playing partner Ancer also birdies and is one shot further back at -10.

Varner is also putting together a nice round thanks largely to an eagle at the 14th which has seen him move onto the first page of the leaderboard.

Tyrrell Hatton is looking to improve on his best finish at an Open – a tie for fifth in 2016. He’s made the right start too with birdies at 2 and 3 propelling him to -9.

Abraham Ancer is also at that mark now after a birdie at 15.

Kaewkanjana isn’t done yet. He’s just birdied the par-5 14th and is now six under for his round.

Xander Schauffele is too far back to contend but the American is enjoying a stellar final day, with four birdies in his first seven holes. He’s now -8 and in a tie for 12th.

The Open 2022: Finau and Conners rise up leaderboard

Tony Finau and Corey Conners are both enjoying great final rounds. The former has just birdied the 16th to go eight under and is joined at that mark by the Canadian, who follows up an eagle at 14 with a birdie at 15.

Sadom Kaewkanjana is enjoying a magnificent final round so far, with a birdie at 11 seeing him move to -9. That’s the best score of any player currently out on the course.

Back at the first, Bryson DeChambeau has got his final round underway alongside Francesco Molinari.

Schauffele on four, his birdie putt is agonisingly wide, he stays at -8.