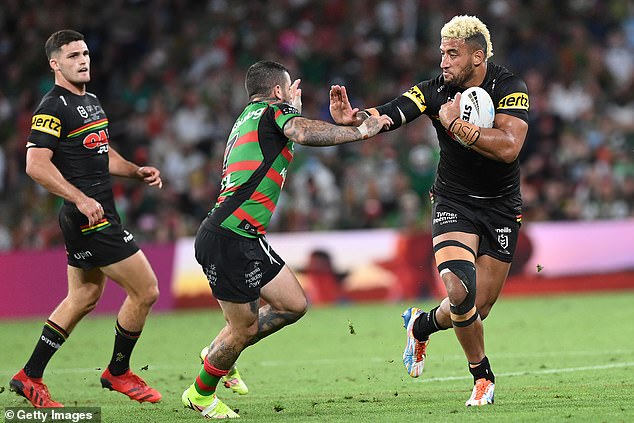 Despite stating otherwise this week, Arrow is likely to be gunning for Kikau in the grand final replay at Bluebet Stadium.

The Fijian international collected Arrow with a high shot in the decider last October at Suncorp Stadium, with the Rabbitohs forward later failing a concussion test at halftime.

He played just 16 minutes in the biggest game of his life, which Penrith won 14-12.

Kikau this week revealed the Queensland Origin representative wanted to fight him after the hit that saw him placed on report.

‘I’m not really a fighter. I didn’t say anything to him. It’s not boxing,’ he said.

When footage later emerged of Kikau seemingly mocking the Rabbitohs by singing their team song, Glory, Glory to South Sydney, it wasn’t forgotten at Redfern.

Kikau put the light-hearted stunt down to ‘fun and games off the field’ and ‘too many beers’ that flowed in the grand final celebrations.

Arrow has added some spice to the eagerly awaited showdown after stating that his rival definitely ‘clocked him’.

‘He got me straight away in my first carry,’ he told NRL.com. ‘He got me a good one, but it is what it is.

‘No doubt there will be a bit of fireworks and both packs will go after each other.’