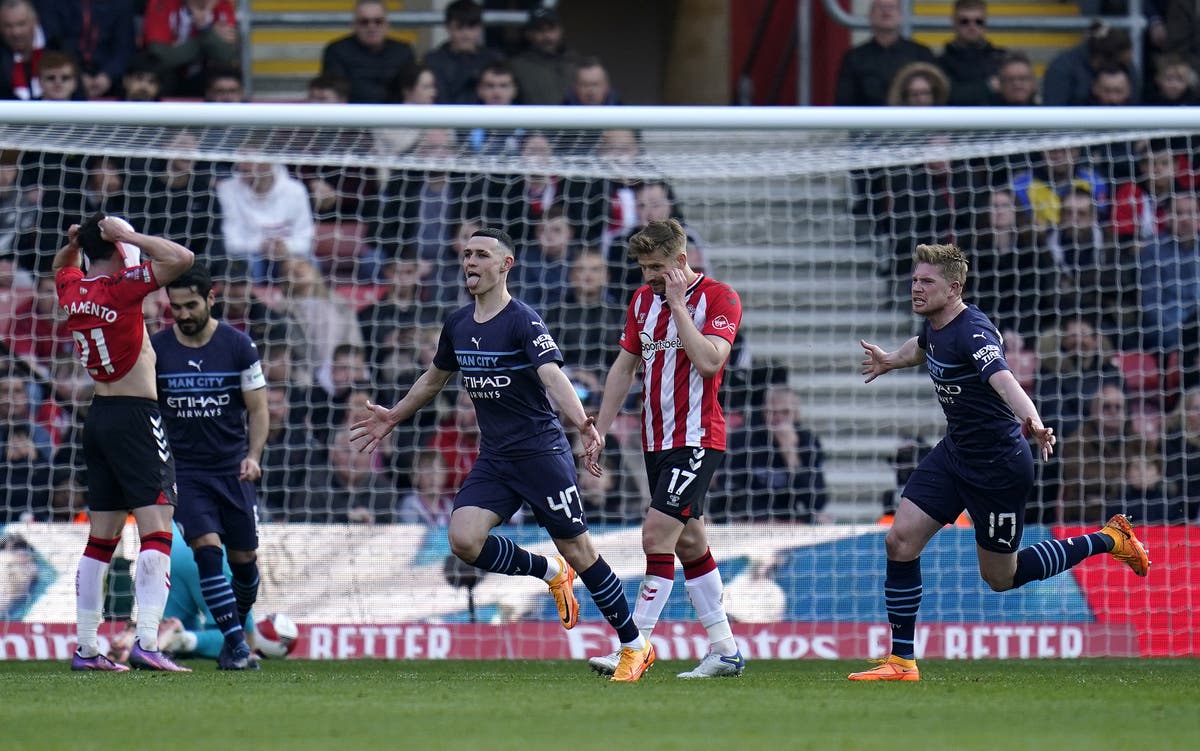 Phil Foden’s stunning strike capped off a dominant Manchester City performance to book their place in the FA Cup semi-finals with a 4-1 win over Southampton at St Mary’s.

Pep Guardiola’s side had failed to win either Premier League game against the Saints this season, but their emphatic victory kept them on course for a treble.

Raheem Sterling had handed the league leaders an early advantage, tapping home in the 12th minute, but it was cancelled out by Aymeric Laporte’s own goal just before half-time.

The hosts fought hard with the scores level, but were deflated when Kevin De Bruyne’s 62nd-minute penalty restored City’s lead.

City’s performance was capped off by a well-struck left-footed shot from the edge of the box from Foden in the 75th minute, with Riyad Mahrez also putting his name on the scoresheet three minutes later.

Southampton started brightly and almost had an early breakthrough when Adam Armstrong was played in behind the City defence, but his slightly scuffed shot rolled back off the far post.

Jack Stephens failed to clear his lines, allowing Gabriel Jesus to attack the loose ball and play in Sterling in the centre of the box, and the England forward made no mistake slotting home via a slight deflection off Tino Livramento.

Fraser Forster had to be alert in the 27th minute as he made an instinctive diving save to deny Ilkay Gundogan from close range, just managing to tip the ball on to the post before Kyle Walker-Peters cleared the ball away from Jesus.

Oriol Romeu had a chance to level the tie just before the break, but his well-hit effort from the edge of the box was straight at City goalkeeper Zack Steffen.

The hosts did equalise just before the interval when Mohamed Elyounoussi beat the offside trap and his shot was deflected into his own net by Laporte.

At the start of the second half Southampton worked well to break down City’s attacks and disrupt their playing style, while they had attempts of their own, including a James Ward-Prowse strike from range that Steffen was able to gather.

But just as the home side looked to be on top, Guardiola’s team retook the lead from a spot-kick.

Referee Mike Dean pointed to the spot after Mohammed Salisu brought down Jesus at the edge of the box with a needless foul and De Bruyne dispatched the penalty, beating Forster who had dived the right way.

Southampton came close to levelling the score for the second time, but Steffen was alert to save Che Adams’s effort after he was played in.

Foden all but secured his side’s place in the last four with his strike from distance, before the visitors added a fourth with just over 10 minutes remaining when Mahrez fired past Forster.