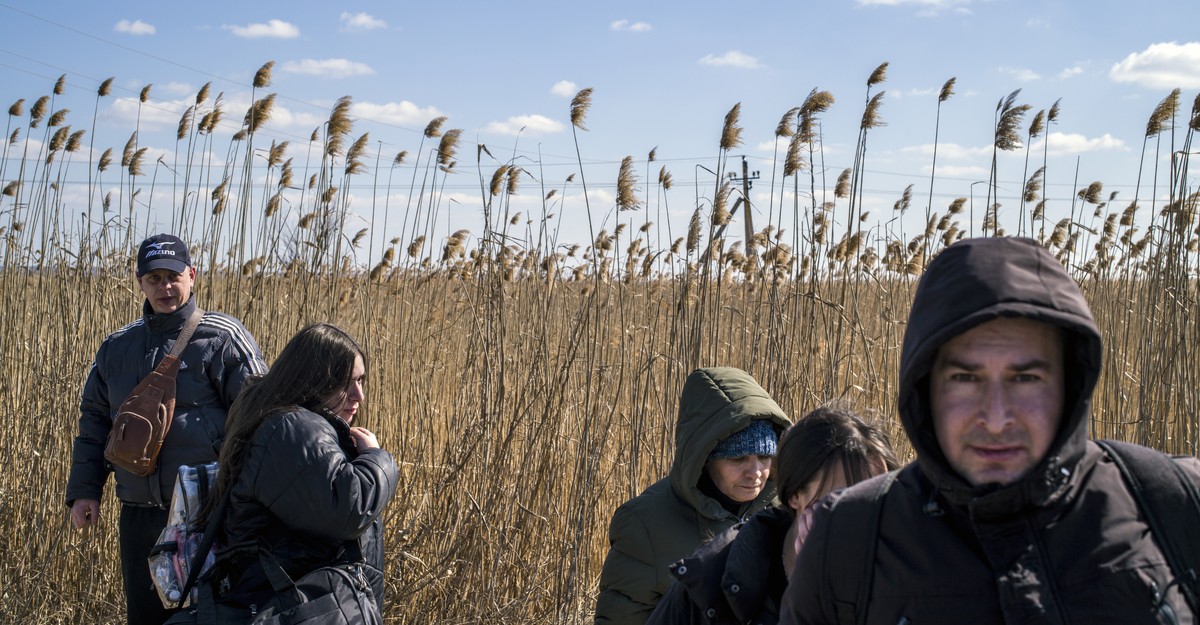 Fleeing conflict triggers the most horrifying of games of chance: Are you on the “right” side of a border when fighting erupts? Are you able to flee a city under siege in the brief moments when bombs are not being dropped? Do the people in your new, ostensibly temporary home have the wherewithal to support you as you find your feet?

Questions and uncertainties do not end once you enter a place—a new city, a new country—that is safe from the violence. Instead, new ones emerge, and you must hope for the best.

According to the United Nations’ refugee agency, more than 4 million people have undertaken this game of chance as a result of Russia’s invasion of Ukraine. The majority are in neighboring countries—mostly Poland, but also Romania, Hungary, Slovakia, and Moldova. (Among this overall number are more than 300,000 who fled to Russia and Belarus.)

Of these, Moldova is the smallest and, in many ways, the most vulnerable. The country has barely more residents than does Queens, in New York City, and, like Ukraine, part of its territory is claimed and occupied by Russia. Yet it has also been remarkably welcoming, taking in nearly 400,000 people fleeing the fighting in Ukraine, a figure equivalent to about 15 percent of its entire population.

Yet those crossing into Moldova—like displaced people everywhere—have wildly varying experiences. Over the course of seven days in Moldova, and at the country’s border with Ukraine, the photographer Moises Saman cataloged those differences, capturing images of the Jewish woman who, helped by international Jewish organizations, is bound for Israel; the Ukrainians lumped together in a community home in a village near the border; and finally the Ukrainian Roma who have found that discrimination has followed them.

All have found a measure of safety, yet that is where the similarities in their stories end.

“I can feel the house terribly shaking … I am scared in the most terrible way.”

Tetyana Anbinder, 73, a recently widowed Jewish resident of Mykolaiv, stands in her small apartment as she packs her luggage on the eve of her evacuation to Moldova. With the support of the American Jewish Joint Distribution Committee, an international network of Jewish organizations facilitating the evacuation of Ukrainian Jews, she is bound for Israel.

Children make up half of all refugees from the war in Ukraine, according to UNICEF and UNHCR.

Ukrainian men escort their female relatives to the last Ukrainian army checkpoint before the Palanca border crossing between Ukraine and Moldova.

“I have never thought in my life I would be hiding in basements or fleeing away from my homeland … I can’t honestly recognize how this could have happened in the 21st century and the world came to something like this.”

Imilia, 17, from the city of Mykolaiv, holds her cat Tynich as she waits next to the last Ukrainian army checkpoint before the Palanca border crossing with Moldova.

“I don’t even know how to describe those feelings—just emptiness, as if you had died, but for the sake of the child, you need to find strength and live.”

Elena Nechepurenko, 28, holds her 5-year-old son Serghei in the bedroom that they share with three other refugee families. Elena fled her village in Odessa province, while her husband stayed behind and joined the Ukrainian army. Elena and her son arrived in Moldova on February 25, and they plan to stay in this village near the border until it is safe for them to return to Ukraine.

“What should I do—go back in the war?”

Maria Todorovich, 41, an ethnic Roma from Donetsk, fled Ukraine with her children more than two weeks ago. She is one of hundreds of Roma living in the Manej Sport Arena in Chișinău. Maria’s passport was damaged during the rush to flee her home, and she is now unable to leave Moldova until new travel documents are issued. She tried several times to get a Ukrainian passport that would let her and her four children leave Moldova for Germany, where Maria has relatives. The only evidence of her Ukrainian identity are ripped-up documents showing her photograph and the names of all her kids.

“This is not right when families are separated … It is almost impossible to calm down and relax.”

A young girl plays in the gymnasium of the Kishinev Jewish Campus, in Chișinău, Moldova. Their journey out of Ukraine was facilitated by the American Jewish Joint Distribution Committee, an international network of Jewish organizations. Once in Moldova, they are provided food, medical care, accommodation, psychosocial support, and connections to local Jewish community.