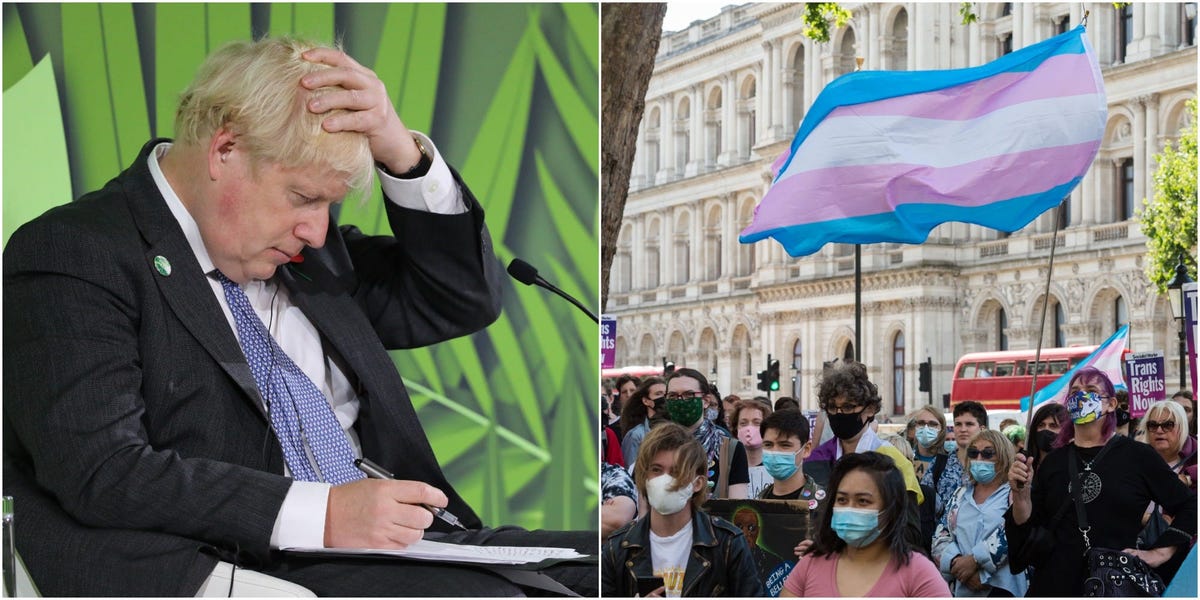 Close to 3 am on March 30, the Conservative MP Jamie Wallis wrote an emotive statement on his life with gender dysphoria, and he came out as transgender.

Wallis explained that some recent, horrific traumas — including being blackmailed over his gender identity and raped— had recently prompted him to share his true self with the world.

Boris Johnson opened Prime Minister’s Questions in the House of Commons on Wednesday, saying: “The whole house stands with you, and we will give you the support you need to live freely, as yourself.”

Wallis’ coming out, a significant moment in British social history, could have been an opportunity to change UK attitudes to transgender rights, but activists and academics told Insider they were not hopeful that this would be possible in a country led by Prime Minister Johnson.

Indeed, the day after Wallis came out, and on the International Transgender Day of Visibility, the government U-turned on its manifesto commitment to ban conversion therapy for trans and non-binary people. The LGBT Foundation described it as an “appalling decision.”

Lui Asquith, the Director of Legal and Policy at Mermaids, a UK charity working to support transgender children and teenagers, told Insider: “It’s an extraordinary moment and explicit in what’s happening. We’re working essentially with an anti-gender government. In my opinion, this is a very dark day for LGBT politics.”

A Conservative MP in Boris Johnson’s government told Insider that the prime minister’s position was to “ostracise trans people.”

Cleo Madeleine, Communications Officer at transgender charity Gendered Intelligence, said the UK’s first trans MP would not be a “turning point for the government without seeing concrete action from the government.”

She said its relationship with gender was expressed in “a 48-hour news cycle in which we have Boris Johnson cracking jokes about trans people at a dinner party, a trans MP coming out, and then a leaked document showing rollbacks of conversion therapy legislation.”

The solidarity for the trans community and any outward support for Wallis will last “a couple of days,” said Webber.

He is “concerned for Jamie’s mental health, just knowing exactly what some of these politicians are like, and how some of them are quite likely going to throw him under the bus at some point for the sake of a vox pop.”

A study by LGBTQ rights charity Stonewall found that almost half of trans people have considered suicide.

Part of what is so damaging to trans people’s mental health, Stonewall says, is the rate at which they are “outed” when their identity is revealed without their consent.

In writing his coming-out statement on Twitter, Wallis revealed someone had blackmailed him, told his father about his

Finn Mackay, a senior sociology lecturer at the University of the West of England, said that Johnson’s government had fanned the flames of this culture war, making for a challenging environment for LGBTQ people in the UK.

“Their government has helped this scrutinizing focus on trans people, who are just trying to get on with their lives,” said Mackay.

While there is much pessimism about the direction of the government’s trans narrative, Mackay said there were also identifiable political allies. “I want to take the opportunity to thank them and thank their advocacy because it’s hard at the moment, but they’re there.”

Is the UK headed for a US-style ‘culture war’?

The UK has been embroiled in a febrile discourse over trans rights for years — with its parliament being no exception.

On International Women’s Day, a debate on March 8 in the House of Commons was, at times, hijacked from a discussion on women who have lost their lives to femicide, and women in Ukraine at particular risk from war, into a graphic conversation on gender, genitalia, and identity.

Speaking in the House of Commons on March 23, Prime Minister Johnson said, “We must recognize when people want to make a transition in their lives that they should be treated with the maximum possible generosity and respect,” adding “when it comes to distinguishing between man and woman, the basic facts of biology remain overwhelmingly important.”

The Conservatives, lagging in the polls, are looking for ways to recapture the lead from the left-leaning Labour party, led by Sir Keir Starmer. Targeting gender-critical issues, identity debates, and woke-ism is a way to fire up the party’s base. “Is the UK headed for a US-style ‘culture war?’ asked King’s College London’s Policy Institute, researching the phenomenon.

Hours before Wallis came out, Conservative MPs gathered for a dinner in central London. Johnson, known for his wordplay and joke-telling,  spoke at the event. “Good evening, ladies and gentleman, or as Keir Starmer would put it, people assigned female or male at birth,” he quipped. Wallis was listening in the room, say reports.