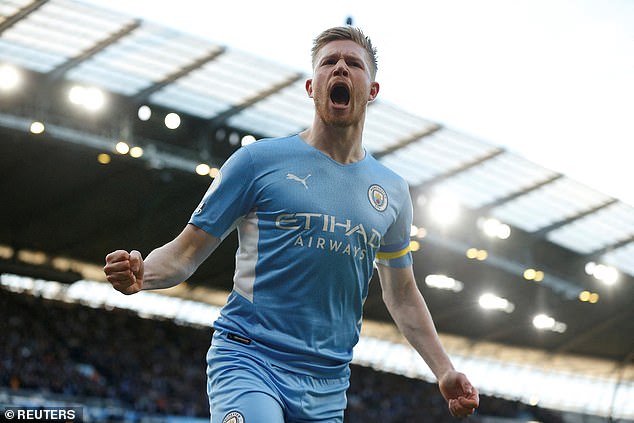 Kevin De Bruyne and Riyad Mahrez both scored twice as Manchester City restored their lead at the top of the Premier League to six points with a 4-1 derby victory over Manchester United at the Etihad Stadium on Sunday.

De Bruyne put City ahead in the fifth minute, slotting home a low pulled-back pass from Bernardo Silva but United drew level through a superb curling shot from Jadon Sancho.

But Belgian De Bruyne restored City’s advantage finding the target after Phil Foden had powered into the area and seen his shot parried out by David De Gea.

City dominated after the break and made it 3-1 when De Bruyne struck a corner deep to the edge of the box and Mahrez met it with a first-time drive which took a slight deflection off Harry Maguire.

Mahrez completed the victory with a goal that was initially flagged as offside but VAR found the Alex Telles had played the Algerian onside before he latched on to an Ilkay Gundogan pass and blasted in off the shoulder of De Gea.

Sportsmail’s Jack Gaughan rated the players at the Etihad.

Made a smart stop to thwart Fred early on and remained alert on the rare moments he was called upon.

Grew into the game after a slow start. Doubled up on for Jadon Sancho’s goal. Used possession well.

Unusually lax distribution from the back. Often a spare man, stood up to the threat posed by the visitors.

Similar to Stones – not a vintage display but then never seemed in any real danger for long either.

Admired for his attacking flair yet his biggest interventions came when halting United on the break.

Helped build the dominance created by City in the 20 minutes after half-time. Marshalled proceedings.

Ran himself into the ground and linked play with the poise for which he is renowned. Classy performance.

Man for the big games. Stepped up and won this one for City with two goals and all-round dominance.

Bright from the off, drifting into awkward positions. Purposeful going forward and diligent defensively.

Agitated by his team’s difficulties in the transitions on an after during which they won comfortably – pointing to why City are so good.

A few stunning saves but ultimately let down by those in front of him. Cut a frustrated figure.

Loss of concentration could have cost United on more than one occasion. Struggled with Grealish.

All over the place for both of City’s first-half goals; given a torrid time by Foden and co.

Important blocks, although rash in the challenge and fortunate not to concede a first-half penalty.

Not decisive enough when United needed their left back to bail them out. Clearly told not to venture forward.

Did his best in an area of the pitch where United were set up to fail. They were overrun from start to finish.

Industrious as ever, attempting to inject impetus. Kept going and tried to force mistakes from the hosts.

Quiet and then not quite urgent enough when chances arose. Lazy ball out from the back for the second goal.

Excellent equaliser, curling away to Ederson’s left. Missed a big chance at 2-1. Couldn’t get much change out of Walker thereafter.

Appeared confused by his position to begin with, dramatically improved for a spell and then reverted to peripheral.

Big call to leave Rashford on the bench and it backfired. Tactically undone by Guardiola for good measure.

Allowed the game to flow and was reticent to reach for yellow cards. Easy to see why he has officiated both derbies this season.