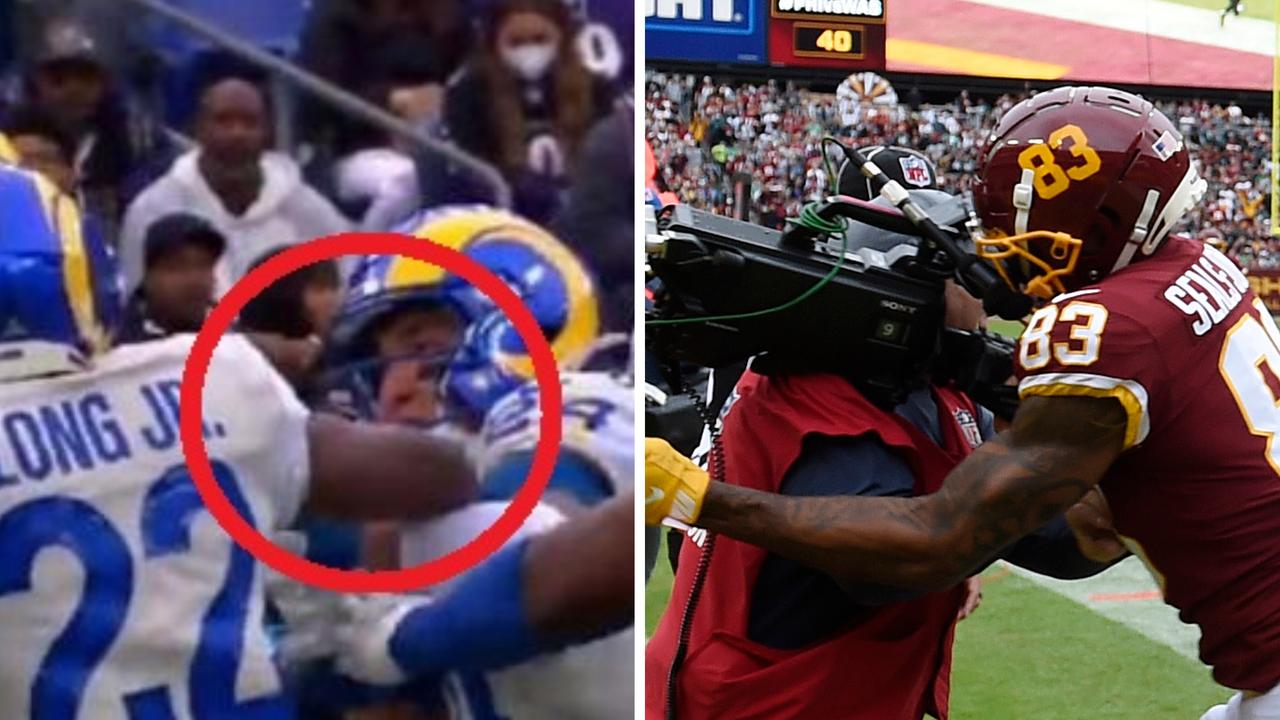 Rookie Evan McPherson kicked the game-winning field goal as time expired on Monday as the Cincinnati Bengals clinched the NFL’s AFC North division title with a 34-31 victory over the Kansas City Chiefs.

Burrow hit Chase for a 72-yard touchdown in the first half, one of Chase’s three TDs on a day in which his 266 receiving yards set a franchise single-game record.

Watch Live NFL every Monday, Tuesday and Friday with ESPN on Kayo. 6 live games every week + every game of the Post-Season. New to Kayo? Start Your Free Trial >

It was also a record for the most in a single game by a rookie in NFL history.

Burrow left the game late in the fourth quarter with a right knee injury but said later he simply re-aggravated a previous issue and that his knee felt “good enough”.

There was a frightening moment in Washington, where Washington Football Team tight end Ricky Seals-Jones was stretchered off with a neck injury after colliding with a sideline cameraman in the team’s 20-16 loss to Philadelphia.

Although he was ruled out of the game, Washington coach Ron Rivera said after the contest that Seals-Jones was up and walking by halftime.

The cameraman was able to return to work.

It didn’t take long for Jalen Ramsey’s frustration to boil over.

The Rams cornerback shoved a teammate, safety Taylor Rapp, in the facemask during the first quarter of Sunday’s game against the Ravens.

The two had to be separated after the huddle, with teammates holding both of them back.

After the game, Rams head coach Sean McVay played down the drama, saying “it’s healthy to be real with each other.”

He added the altercation came after miscommunication between the two.

“They both want to do right. There was a little bit of a mix-up right there. It’s just like anything else … You ever get into a fight with your brother? They moved on and they kept it going. I don’t think it affected our ability to move forward.

“These are two guys that love football, that love one another. There was a little bit of a mix-up.”

The incident also happened in the middle of a big game for the Rams, who beat the Ravens, 20-19, via a Matthew Stafford to Odell Beckham Jr. touchdown with 57 seconds remaining.

Ramsey was involved in a potentially dirty play earlier in the year, appearing to slam Trevor Lawrence’s helmet onto the field after an interception return.

The Patriots manhandled the Jacksonville Jaguars 50-10 to post their 10th win of the season.

Rookie quarterback Mac Jones completed 22 of 30 passes for 227 yards and three touchdowns and the Pats and were assured of their first post-season berth since Tom Brady departed for Tampa Bay after the 2019 campaign when Miami fell 34-3 to Tennessee.

That victory saw the Titans secure the AFC South division title for the second successive season.

Buffalo punched their playoff ticket with a 29-15 victory over Atlanta coupled with the Indianapolis Colts’ 23-20 loss to the Las Vegas Raiders.

But the 93-yard winning drive was overshadowed by Antonio Brown’s sideline meltdown that saw the receiver strip off much of his jersey and pads and stalk off.

Buccaneers coach Bruce Arians said after the game that Brown’s tenure with the team was over.

“He is no longer a Buc,” Arians told reporters in his only comment on the incident.

“That’s the end of the story.”

Tight end Rob Gronkowski said he wasn’t aware of the Brown drama as the Bucs pushed for the comeback.

“Whoever was in the huddle, we just kept fighting,” Gronkowski said.

The only downside to the day was an ugly right ankle injury to Titans tight end MyCoyl Pruitt in the second quarter.