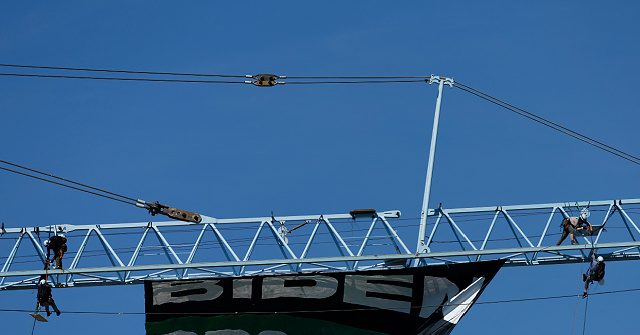 Pro-abortion activists from the Woman’s March organization scaled a crane in Washington, DC, on Tuesday and unfurled a banner that read, “Biden Protect Abortion.”

The stunt occurred in the 1500 block of North Capitol Street and P Street, NBC 4 reported.

Women’s March proclaimed on Twitter that their “Summer of Rage is just starting” in response to the Supreme Court’s decision to reverse Roe v. Wade on Friday.

The Summer of Rage is just starting, and we aren’t going anywhere until abortion access is protected. pic.twitter.com/0ZXYI71VaV

“This team of activists, all from states such as Florida, Texas, and Michigan, states Biden needs to secure re-election, will scale a crane in Washington D.C. to send the President a clear message: we will not go back,” the organization stated in a press release, per ABC 7.

While the organization demands that Biden take executive action, the president insisted in his speech Friday that Americans enshrine abortion as a constitutional right by voting for Democrats in the midterm elections this November.

Following the Supreme Court’s decision, the Women’s March declared that “Our summer of rage has just begun,” and then ambiguously stated, “We’ll see you in the streets.”

Hey I’m at the top of the Frederick Douglass bridge in Washington DC right now & want to know why YOU aren’t in the streets nonviolently shutting down the gov day after day after day till Congress protects abortion rights? Rise Up my Friends! pic.twitter.com/sDuqmpi8fm

Reichstadter lit a flair on top of the bridge, causing traffic to a halt. The man also waved a flag on the bridge that read, “don’t tread on my uterus,” ABC 7 reported.

BREAKING: A protestor is scaling the top of the Frederick Douglass Bridge — The man is waving a flag that reads “don’t tread on my uterus.”https://t.co/0LYNw8XDni pic.twitter.com/cKBHW0GosN

He was arrested immediately after coming down, the New York Post reported.