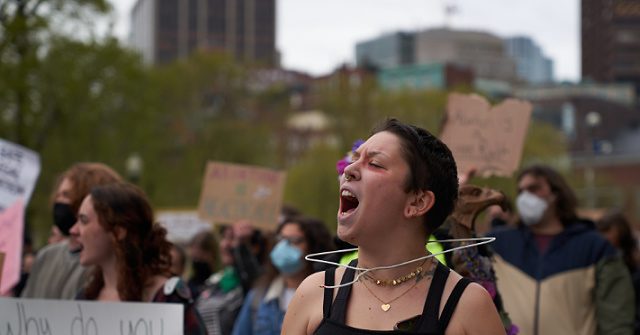 Despite President Joe Biden’s governing agenda being one of the most progressive in the history of the nation — including supporting pro-abortion policies and calling it a “fundamental right” on Friday — left-wing protesters appear to not be satisfied with the president as Roe was overturned during his administration.

None of the Justices who presided in the Dobbs decision and dissent were appointed by Biden during his presidency; however, six of the nine justices were confirmed to the Supreme Court when he was either a senator or vice president.

The protesters also appeared to be outraged at Virginia Gov. Glenn Youngkin (R), who announced Friday that he is willing to sign legislation that would prohibit abortions in the state after 15 weeks.

Per the Associated Press:

The Republican told The Washington Post he has asked four Republican lawmakers to draft the legislation. He told the Post that although he favors banning most abortions after 15 weeks, a cutoff at 20 weeks might be necessary to build consensus in the divided Virginia legislature. He reiterated his support for exceptions in cases of rape, incest or when the life of the mother is at risk.

Youngkin reaffirmed his position as a “pro-life governor” on Friday following the decision:

Youngkin, in another statement on Friday, confirmed that he was in contact with state and local law enforcement in lieu of potential violence following the decision. “Virginia will not stand for lawlessness or violence,” the governor stated.