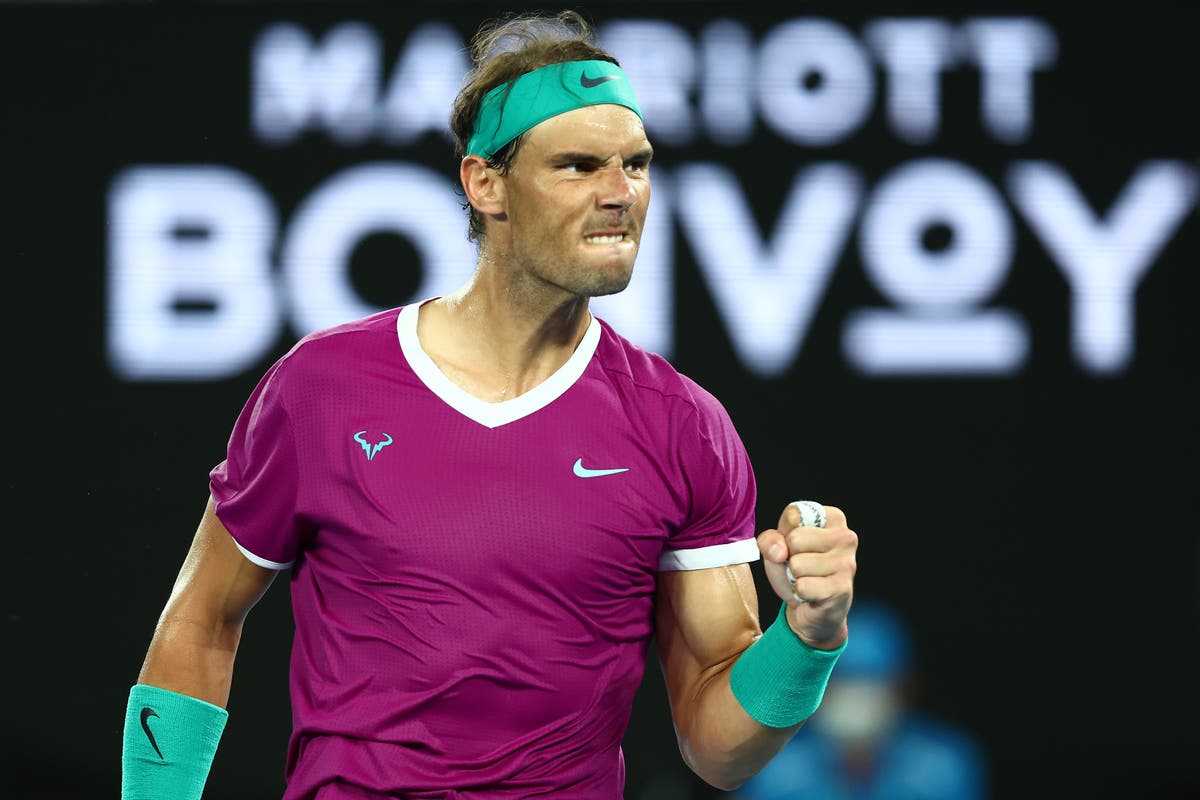 Perhaps the best way to make tennis history is by doing it when no one is expecting it at all. Rafael Nadal is back in the Australian Open final and one win away from a record-breaking 21st grand slam title, a prospect which has arisen suddenly and dramatically over the past two weeks in Melbourne to make a mockery of the suggestion that the tournament would struggle without the presence of a certain world No 1.

There are few things more dangerous in sport, particularly in tennis, than an opponent who has nothing to lose. Daniil Medvedev, on the hunt for his own slice of history, remains the favourite ahead of Sunday’s final but Nadal has already come through worse odds to make it this far. The Spaniard, at the age of 35, is competing with the fearless enthusiasm of an 18-year-old on the brink of an unexpected first glory, fuelled by a sense that the time he has been granted is a gift from life itself.

Nadal revealed after his four-set victory over Matteo Berrettini in the semi-finals on Friday that he had been in a dark place just months ago as he dwelled on retiring from the sport due to a long-standing foot injury. His journey to the Australian Open final has seen him emerge into the light to rediscover a simple yet sheer enjoyment for the game. “I’m feeling alive again,” he admitted.

For Nadal to be embracing this opportunity is not the surprise, but the level he has rediscovered has left him visibly stunned. Nadal had been tipped to struggle against Berrettini, the world No 7 and Wimbledon finalist, but dismissed the threat of the big-serving Italian in sealing the 6-3 6-2 3-6 6-3 win.

Even as Berrettini threatened a comeback, as Denis Shapovalov had done in the previous round, Nadal upped his game to deny the 25-year-old, breaking his serve at the crucial moment towards the end of the fourth. To produce this tennis, in just his second tournament appearance in six months, left Nadal and his team without the words to express the magnitude of what he is doing.

“It’s difficult to believe,” Nadal said. “But the people who are next to me and have lived through my conditions the last six months, they find it difficult to understand that I can play at this level right now. It’s difficult to explain but I feel lucky just playing tennis.”

For a player whose return to the top of the game has been motivated by passion for the sport, rather than a pursuit of numbers and records, it is almost ironic that he finds on the verge of such an achievement. History will be made on Sunday one way or another, however. If Nadal does not eclipse Novak Djokovic and Roger Federer by winning a 21st grand slam title, it will be because Medvedev has become the first male player in the Open era to capture a second major crown immediately after securing his first.

The world No 2 and tournament favourite overcame a meltdown to defeat Stefanos Tsitsipas in the second semi-final, in another match that will be remembered by Medvedev’s latest histrionics in Melbourne. This time, a rant at umpire Jaume Campistol over a lack of punishment for what he perceived to be persistent on-court coaching from Tsitsipas’ father, threatened to derail his Australian Open bid.

Instead, as the 25-year-old has done throughout the tournament, he used that energy to significantly improve the quality of his serving and overall game. In the end, the manner in which he put the outburst behind him was impressive, and a further statement of his emerging credentials as a big-game player and next dominant champion in the sport. Tsitsipas, the world number four, couldn’t keep up with Medvedev once he truly hit his stride.

It is funny, Medvedev remarked after the match, that he again finds himself on the opposite side of the net in what could be another defining chapter in the history of tennis’ big three. After all, his breakthrough title at the US Open denied Djokovic his own shot at the grand slam record, as well as his hopes of a calendar slam, a feat not achieved in the men’s game since Rod Laver in 1969.

That occasion proved too much for even the steely-grit of Djokovic. The emotion overwhelmed him, first as he smashed his racket after dropping the opening set, and then as he broke down into tears as Medvedev was about to serve for the match in the third. After the realisation dawned that his relentless push for history was falling agonisingly short, Djokovic was overcome.

Nadal now finds himself in the same situation but with a completely different perspective on what victory or defeat in the final would mean. “It’s much more important to have the chance to play tennis than to win the 21,” said Nadal on his pursuit of further glory, the significance of which is outweighed by the gratitude he has to be able to enjoy this stage again.