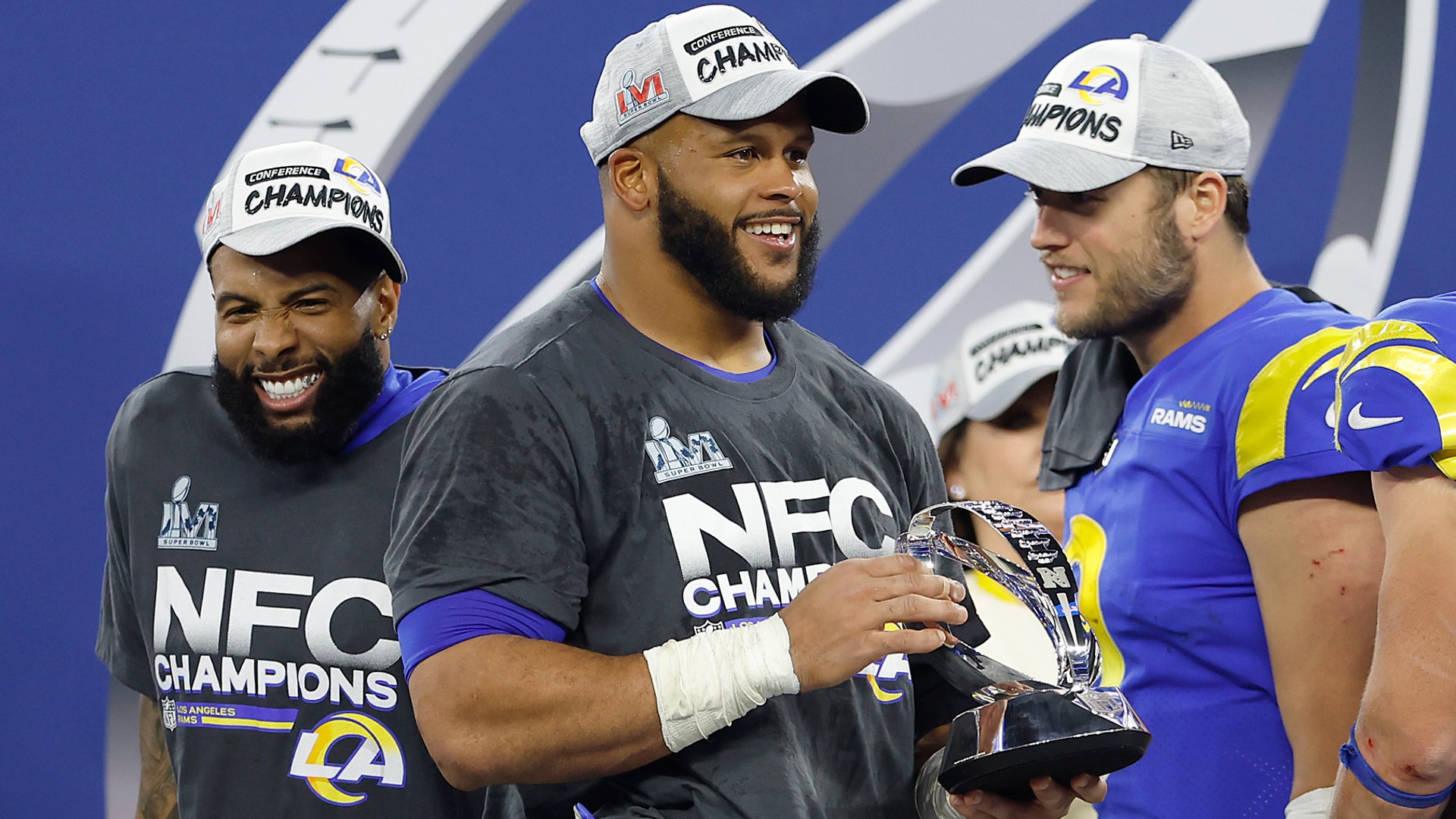 When the result of this game was inevitable, though not yet official, Aaron Donald pointed to the ring finger on his left hand, which has been naked for far too long. He has been one of the NFL’s greatest players almost since the day he walked into league — not one of its greatest current players, one of its greatest ever — but never has he laid any of of his digits on the Lombardi Trophy.

That’s what this past year has been about: the Rams going all-in on winning Super Bowl 56. They haven’t picked in the first round of the NFL Draft since 2016. They won’t do it again until 2024.

They gave away two first-round picks as part of the deal to switch quarterbacks with the Lions, bringing in Matthew Stafford and giving him a chance to rewrite a career record that was 16 games under .500 when he arrived in LA.

They traded second-and third-round picks in November for 2 1/2 months of linebacker Von Miller. They signed Odell Beckham Jr. as a free agent after he’d played his way off the Browns’ roster, which isn’t easy to do, correctly reasoning Beckham could not afford to squander this opportunity.

Whether it all has worked depends on if you consider participation in the Super Bowl, assured with Sunday’s 20-17 NFC championship game victory over the 49ers, to be fulfillment.

It can feel like that in the aftermath of such a triumph, but the Rams have been here before, and not that long ago. They reached this plateau in the 2018 season and lost miserably to Tom Brady and the Patriots. Today, it is about being there, but the Rams did not squeeze the life out of their future merely to enjoy these next two weeks in the spotlight.

“We’ve had high expectations all year. We’ve done nothing but do everything in our power to try and meet those,” Stafford told reporters after the game. “It’s a driven group we have in there. It wasn’t perfect. It wasn’t easy in some spots, but we found a way to win the game.”

It has been decades since anyone tried to win a championship as the Rams are now, not so much disregarding draft picks as considering them investments in the present, not the future. Instead of saving for retirement, they’re buying that damn yacht and living it up in Marina del Ray.

Miller contributed five sacks in the eight regular-season games he played for the Rams, but they all came in the season’s final four weeks. He delivered one in each of the first two playoff games. As a team LA never got to the Niners’ Jimmy Garoppolo, but he knew the Rams’ fearsome front was there. Their pressure on third-and-long on the 49ers’ final attempt at a game-winning drive led to two rushed incompletions and a desperate, half-flung interception.

After catching 17 passes for 232 yards in six games with the Browns, including just a single reception for 6 yards in a Halloween loss to the Steelers, Beckham was recruited hard to LA by Rams players, including Miller, following his release by the Browns. Beckham played better in what remained of the regular season, but he has stepped forward with authority in the playoffs, catching 10 for 123 yards in the team’s first two victories and then dominating the Niners with nine catches for 113 yards.

MORE: Why were Jalen Ramsey and Robbie Gould arguing?

“It’s been everything,” Beckham said. “Being integrated into the plan, taking me in, just pushing me for excellence . . . everything about this place is right, is done right, and it’s just been an incredible opportunity. I feel like I’m just trying to make the most of it, and here we are playing in the Super Bowl, one game away from our dreams. Let’s keep it going.”

It can be overlooked what a risk it was to presume Stafford was a championship-level quarterback. A starter since 2009, now a week away from his 35th birthday, he was on the verge of 50,000 career passing yards when the Rams acquired him but had played in only three playoff games during his career, losing each one of them. Those defeats were by a combined 41 points, and they were years ago, literally.

Perhaps this experience was reflected in the journey to this position. The Rams finished the year 12-5 and wound up with the NFC’s fourth seed when they dropped their final regular-season game, to these same 49ers on this same field at SoFi Stadium. Stafford threw 17 interceptions, more than any quarterback in the league.

He has not been that quarterback in the playoffs. Sunday, he was 31 of 45 for 337 yards and two touchdowns, his one big mistake coming on a potential scoring drive in the first quarter that turned into a deflected interception.

“We went out and got him because we thought it was a chance to get a great player of his magnitude — those things don’t come around often,” coach Sean McVay told reporters. “He’s made me a better coach. He’s made his teammates better. He’s such a great person. If you don’t root for this guy, something’s wrong with you.

“No moment is too big for him, I can tell you that. He’s elevated everybody around him. We’ve got one more. We know it’s going to be a great challenge.”

MORE: Stafford thanks wife for support: ‘Couldn’t have done it without her’

The Rams brought Stafford, Beckham, Miller and conspicuous cornerback Jalen Ramsey — who was acquired from the Jaguars in 2019 for two first-round picks and a fourth-rounder — to their press room to speak with the media, but not their greatest player. Donald made the only statement necessary with that gesture that followed Tavin Howard’s game-clinching pick.

“He’s been Aaron Donald: vocally, physically, emotionally,” Miller said. “That’s what leaders do, man. He’s been a great leader. It just feels good to contribute. The Super Bowl is all he needs, and he can walk off into the sunset. I’m going to do everything in my power to make that happen for him.”