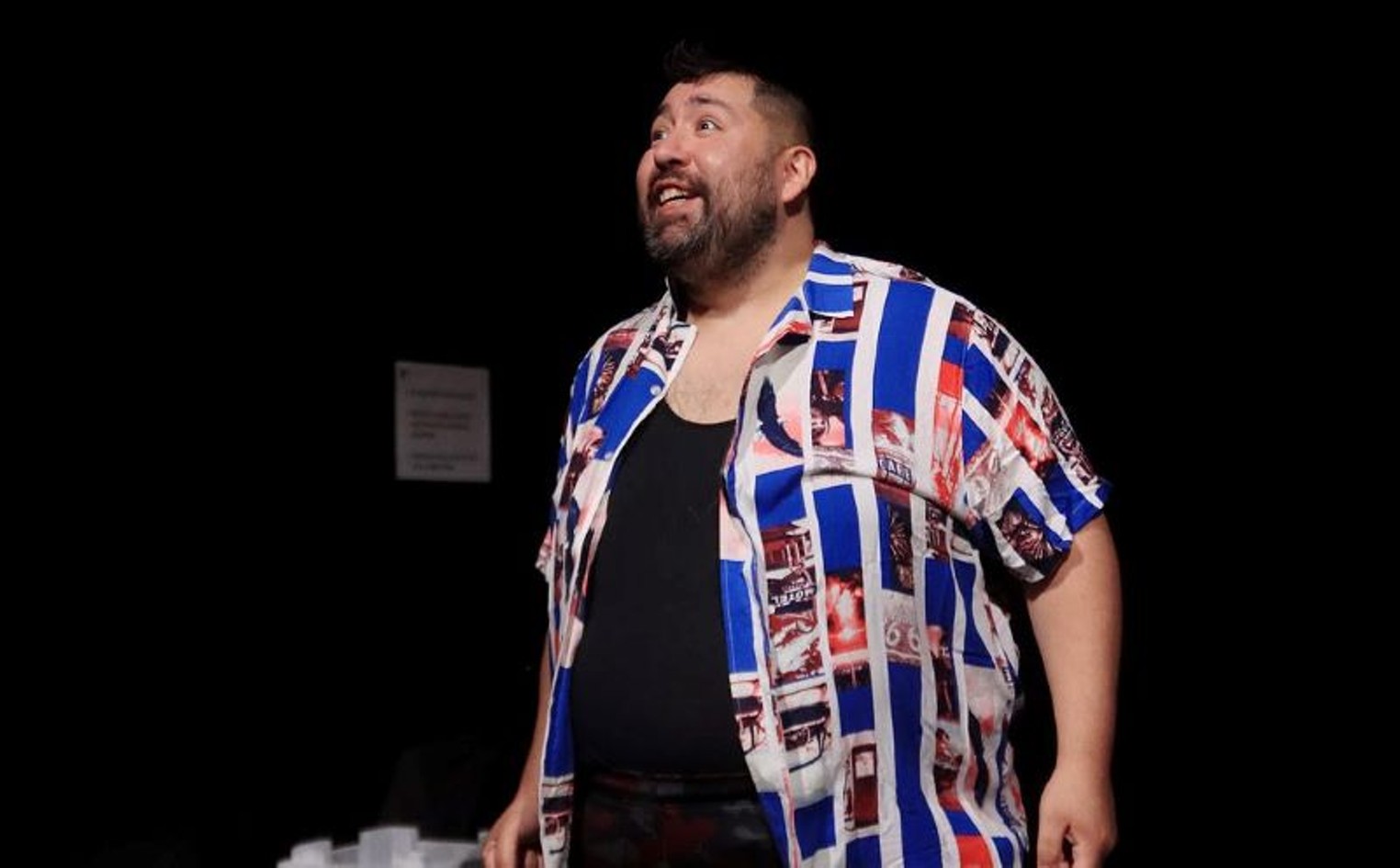 Firecracker Productions’ intimate, low-rent version of Peter Sinn Nachtreib’s Bob, A Life in Five Acts (2011) may possibly be the sleeper hit of the season.

This life story of everyman Bob is packed with incident, screwy characters, surreal situations, and a wicked gay wit that veers from easy sit-com laughs to probing of the human heart and why it’s so easily broken.

Yes, the show is much too long. Too many dance numbers that resemble those iconic Jules Feiffer “Ode to Spring” cartoons from the Village Voice pall while they’re being performed. Some scenes double back on themselves instead of moving forward. And there are two epilogues which could be condensed without losing any of their emotional pull. In one of the tiniest rooms in the Garza Studios the darkly comic play begins to close in on us.

Bob is linear as it follows our hero from birth in a White Castle hamburger joint, a boyhood living with his adopted mother in her beige Chevy Malibu as they travel throughout America, her death and symbolic cremation on the steps of Chicago’s Art Museum, his first love, losing his first love, losing his pants to his birth mother, finding his father who’s now a hobo who once was the world’s greatest animal trainer, to his luck at the Vegas casino The Martin Luther King, What’s Your Dream?, to his Howard Hughes existence showered with fantastic wealth, to his life as beach bum in Mexico living in a car park with his flea circus. It all comes full circle as people from his life enter and exit with appropriate timing, to lead him on, trip him up, but basically to give him hope to go on.

Nachtreib’s surreal crazy-quilt structure works splendidly with his surefire dry, ultra dry, comic sensibility. I kept thinking of Thornton Wilder’s The Skin of Our Teeth. We buy all of it – the strangeness, the stagey-ness, the let’s-put-on-a-show vibe, the indiscreet lighting – because the cast believes it, utterly. They double and triple roles, and each caricature is entirely convincing and very funny.

The play is firmly anchored by Abraham Zapata, a bear-and-a-half performer with the vocal chops of Orson Welles. He coos wondrously when a baby, gasps with wonder at Mount Rushmore as a boy, finds sweet ecstasy with Emilia (an appealing Arianna Bermudez Case), then switches voices when he becomes a rich man commanding his faithful butler Tony (John Dunn, always watchable). It’s an amazing, defining performance, rivaling his fantasy-fulfilling Molina in Mildred’s Umbrella/Talento Bilingue’s Kiss of the Spider Woman (2012). Bob’s dream is to become a great man, to be honored with a plaque somewhere, to be remembered. Zapata’s all-out performance is one to remember.

Sammi Sicinski, as adopted mom, sweet Jeanine, is wondrously sympathetic, then switches comic gears as Valley girl at a rest stop, and a smart-ass Girl Scout in Vegas. She’s wonderfully bubbly. Dillon Dewitt shines as hobo dad Roy Gunther, or a tame wolf who can dance Fosse (don’t worry, it makes sense in the greater scheme). He possesses smooth charm and a vibrant purr, as younger version of dad, that could tame feral wolves.

Directed with a fairly loose hand from Rhett Martinez, Bob’s picaresque adventures seem to have been produced on a budget of about $25. There’s a sheet, some travelogue projections, chairs, boxes, a harmonica, no costumes except a red robe for rich Bob, and three leopard print tops for the prostitutes. But Nachtreib’s screwball wit and Hallmark card message of “no one is alone” works extremely well – surprisingly so. The five adroit ensemble players deserve the success. Bob’s mantra throughout is: I want to be a great man. Zapata manages this quite well. He gets his wish.

Bob: A Life in Five Acts continues through May 7 at 8 p.m. Fridays and Saturdays. Garza Studios, 241 N. Milby. For more information, visit firecrackerproductions.org. $20.