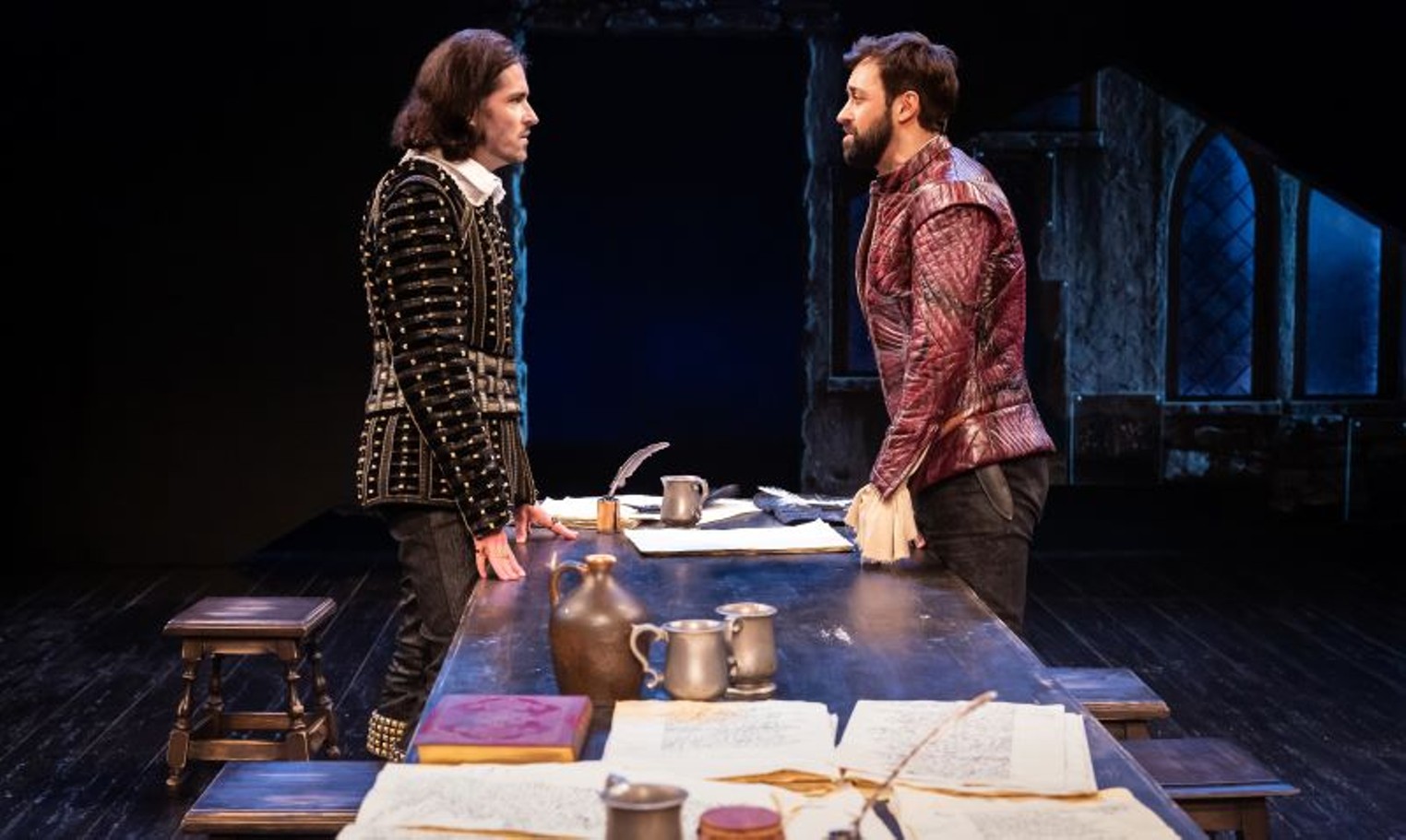 If you, dear playgoer, desire time travel with a vengeance, then take my hand and merrily traipse with playwright Liz Duffy Adams back to Elizabethan England via quick-witted punk sensibility in her delicious fantasia Born with Teeth. In a season replete with world premieres, the Alley Theatre’s stunning production just might be the crown jewel.

It doesn’t hurt that our protagonists in her two-hander are the preeminent writers of their generation: Will Shakespeare and Kit Marlowe. In this version, Shakespeare, new to London, is untested, described as a rube, a country bumpkin…an actor. Marlowe is feted, the first among firsts, creator poet of smash hit Tamburlaine, a Tudor rock god. Put them together in a secluded tavern, not to be disturbed, and have them knock out a new history play Henry VI, a trilogy no less.

Adams has done her research. If you remember Main Street’s Or, her wondrous kaleidoscope of Restoration theater that mashed up Charles II, Nell Gwyn, and playwright Alpha Behn, or last month’s Dog Act, also from Main Street, her dystopian fable that mixed Mother Courage with Mad Max, you know of her unique word play, her surreal view of the world that echoes the distant past, or the future that relies on ancient knowledge to keep going. She knows her period piece. The play is embossed, nay, caressed, with a panoply of Elizabethan theater references – Nashe, Greene, Beaumont and Fletcher, Holinshed’s Chronicles, et al. It’s a trip and a half. If these names mean nothing, don’t worry, what’s on stage will hold you enrapt.

Marlowe (a superlative Matthew Amendt) preens, seduces, cajoles, and wears his gold-studded doublet as if manor-born. “I live on the edge,” he boasts, and we believe him. He is the star peacock of London theater and wallows in the fame. He doesn’t want to be stuck in this tavern with untried Shakespeare and constantly puts down this “boy” all the while putting the make on him. He’s randy and dangerous and sexy as hell. “It’s an honor to work with you,” Will says shyly, attempting to ingratiate himself with the great writer. “I should say so,” is Kit’s flippant reply, brushing back his hair like a Sloane Ranger. He’s on a mission and Will’s his unwitting patsy.

If you don’t know Marlowe’s reputed infamy (atheist, unapologetically gay prickler of royal pretention), or the Virgin Queen’s paranoia (the “old monster” Kit calls her), or the political intrigue that wove through the late Tudor age like a Venetian tapestry, you may be at a loss with the talk of spies, lapsed Catholics, or coinage, but, trust me, what might not be clear is subsidiary to the parrying thrusts both men make against each other. The blows come thick and fast, rapier-like, sharp as a wound. Could they be love taps?

Shakespeare (a marvelously pungent Dylan Godwin, in perhaps his best performance at the Alley) is no fool. He, too, knows his own worth. Marlowe intuits it, also. He may tempt Will with bedroom banter to upset him, but he’s in thrall to Will’s innate ability to create and sympathize with his characters, no matter their flaws. Both men love the attention of the other, and their feints are but prelude to a kiss. Marlowe’s dark side is his impediment. He threatens to expose Will’s family as Catholics if he doesn’t join him in his spy game. He then threatens Will. He’s already betrayed his friend and fellow playwright Thomas Kyd to the torturer’s wheel, so there’s no telling what he might do. What’s Shakespeare in love to do? The ending is an utter surprise – Shakespearean, you might say. It’s the fitting capstone to this intriguing play that constantly surprises all evening.

Alejo Vietti’s sharp costumes blend goth and Renaissance in eye-catching ways – the studs on the turned down flap of Kit’s boots are a perfect touch; Michael Locher’s minimalist tavern set, all black, of course, with Tudor backdrop enlivened with Plexiglas panels, is completely right for a production that blends ye olde times with today’s spirit. Director Rob Melrose graces Adams’ work with a propulsive tension that pulls us inexorably into the drama’s vortex. The eddies grow tighter until the clinch. We’re with these characters until the end.

Born with Teeth is but the newest and brightest addition to the Bard’s canon. No other playwright spurs so much interest; but it’s lovely to see the great Marlowe get his due, too. Godwin and Amendt, through Adams’ perceptive blueprint, build a most impressive edifice to honor both of them. This play, workshopped in the Alley All New series, is a most definite smash hit.

A note to the prop department:
I’m a sucker for period drama. Contrary to legendary movie producer Samuel Goldwyn (the “G” in MGM) who reputedly said he didn’t want to make any more movies where people write with feathers, I love movies and plays where people write with feathers. But your quills are wrong, as magnificent as they are, especially when Marlowe unrolls his quiver of writing implements to impress Will. Look at any Renaissance painting where someone is writing. No feathers. Scriveners shaved off the feathers whose wispy ends would catch ink and make a mess of their expensive parchment. Goose quills should look like pencils. Just saying. Sorry.