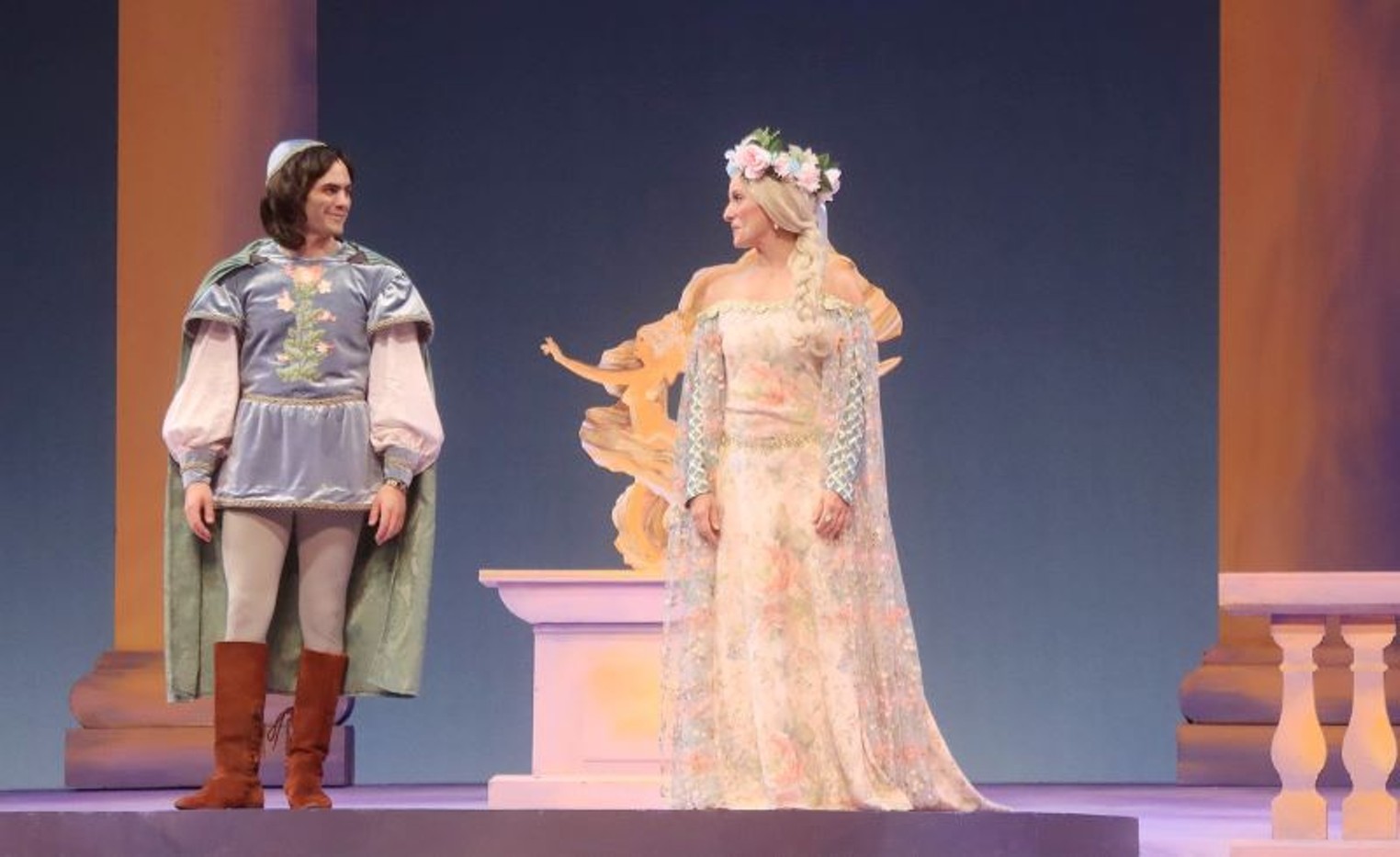 Why is it that given a rarely performed Shakespeare play like Cymbeline, written supposedly near the end of his career (produced c. 1611), directors seem to think it should be played broad and in italics?

Cymbeline is classified as a “romance,” a “comedy,” a “fairy tale,” and once was labeled inconceivably as one of his “tragedies.” It is no tragedy, but it has plenty of darkness, romance, a bucolic setting for the second part, and fanciful comedy as if Shakespeare is writing on autopilot, mocking his own tropes from years earlier. It could be called a sex comedy, except one of the characters gets beheaded.

Cymbeline often feels like the great author was drinking too much mead, or reverted to past, much better plays, or just was too tired with it all to try very hard. Jacobean playwrights Beaumont and Fletcher, who collaborated with the Bard on sections of his later plays, may have had a hand in the clunky plotting with its unbelievable contrivances that elicited laughs from the hot, sweaty audience at Miller Outdoor Theatre.

Maybe that’s why the Houston Shakespeare Festival went overboard on the caricatures. Jack Young, HSF’s artistic director, directs from a very broad palette, turning the characters, especially the evil ones, into cartoons. Cloten (Caleb Clark), the Queen’s son and heir to the kingdom if he marries his stepfather’s daughter, the innocent Imogen (Laura Frye Benovez), is a pouty momma’s boy, prancing and swishing his hair and cape as if on RuPaul’s runway.

Iachimo (Jack Gereski), a scheming Roman who bets hero Posthumous (Kyle Clark) he can prove his young wife unfaithful, is an Iago lite, who smuggles himself into her bedroom in a chest from where he can spy on her (that mole on her breast!) and steal her jewelry as testament to her infidelity There are letters misunderstood; a bit of cross-dressing when Imogen travels to meet Posthumous who’s been banished by her father Cymbeline (Ken Hopkins, Jr.); a kindly apothecary [like Friar Laurence] who switches the queen’s poison for a harmless sleeping draught. And, of course, the Queen (Lauren Seneshal), Cymbeline’s second wife, is an exact avatar of Snow White’s evil stepmother, plotting the young wife’s death and then the death of her husband for her own fame and fortune.

Everyone and everything is over the top. If Shakespeare wanted to write his own parody, he succeeded. Yes, there are fragrant passages, but the plot’s so silly, we can’t ever get a grasp on the seriousness of it all. Cloten gets his head chopped off by Cymbeline’s son Guiderius (Patrick Fretwell), who believes he’s the son of banished best friend Belarius (Andrew Garett). The Queen dies offstage. The only character with any sense is Pisano (Jordan Crow), servant to Posthumous, whose loyalty and faithfulness is the play’s lodestar.

The play’s been trimmed to a hasty two acts. Unfortunately there aren’t many moments when the oppressive outdoor heat overcomes the cool sublimity of Shakespeare’s words. Jon Young’s set design cleverly uses dropped flats of swagged curtains, giant columns, and a cave face; Christina Giannelli’s lighting is first-rate; and Jodie Daniels’ costumes mash up Roman armor with medieval cone hats, much like the mashup Shakespeare creates.

The young lovers, Clark and Benovez, are authentic, speak the speech trippingly, but pose like Grecian urns when emoting. Benovez becomes more flighty than witty when Shakespeare shows his punning sexy side, which is often on view here.

But what is that thing Garett, as Belarius, has stuck on his face? It’s a fright wig masquerading as a beard. It’s so patently false you don’t know whether to laugh at or pity the actor who has to wear it. Get better whiskers for this old man.

Tickets for covered seating are free but covered seating by the stage requires a reservation in advance. You can get your tickets online here beginning at 10 a.m., one day prior to the performance date until noon on the day of performance. You must be 16 or older to order tickets. Each person is allowed a maximum of 4 tickets. The box office, located on the northeast corner of the theater, will be open one hour before the performance starts. No late seating for the covered seats.