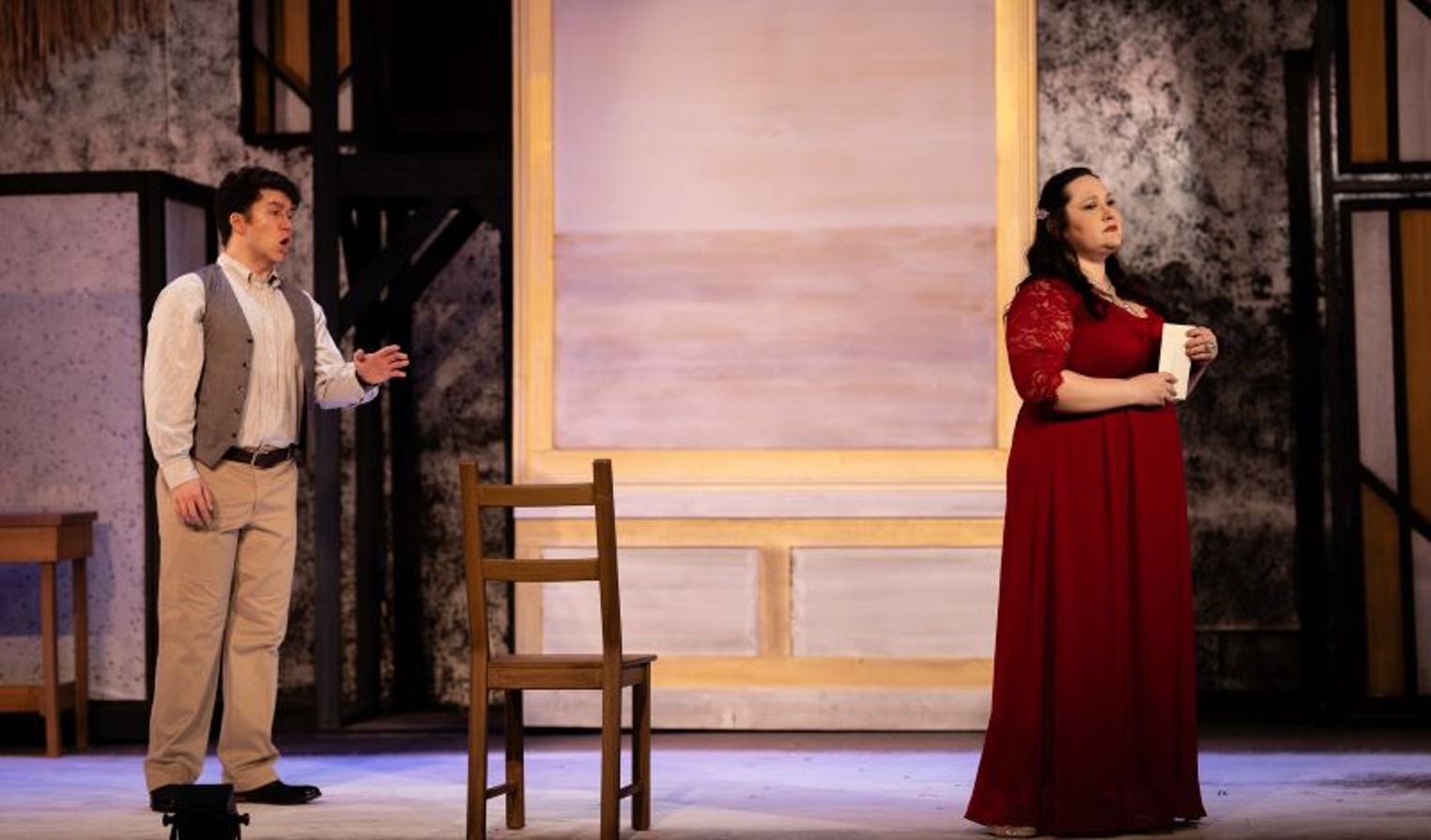 I knew trouble lay ahead in Opera in the Heights’ physical production of Tchaikovsky’s Eugene Onegin (1879) when I saw the large portrait on the upstage wall. It resembles a propaganda recruiting poster from the early Stalinist era, a sort of Rosie the Communist Riveter. Against a red background, the unsmiling comrade, her hair wrapped in babushka, holds a rifle. It’s quite commanding and forceful. What does this have to do with Tchaikovsky’s adaptation of Pushkin’s classic verse novel about dreamy romantic love butting against the reality of everyday? Well, nothing actually. That’s the problem.

Tatiana, the daughter of a country estate owner, lives in her world of romance novels. Innocent, she awaits her prince. When citified, bored Onegin is introduced to her, she is smitten instantly. This is her fate, she sings. Here is the man of her dreams. She writes an ardent letter to him, unburdening her heart and laying bare all her feelings for him. Unfortunately, he spurns her affections, humiliating her. He could love her as a sister, nothing more. Tatiana is crushed.

At Tatiana’s birthday party, Onegin brazenly flirts with best friend Lensky’s fianceé, Tatiana’s young sister Olga. He wants to tease Lensky for bringing him out to the burbs where the rubes live. Onegin’s prank prompts Lensky’s jealousy to flare into deadly fury. Rashly, he challenges Onegin to a duel. Onegin shoots him dead.

Years later, Onegin, guilt-ridden but still bored with life, returns to Russia and meets Tatiana at a grand ball. No longer the young innocent dreamer, she is a grand lady, rich and sophisticated, married to an older honored soldier. Now, Onegin is smitten. He is in love for the first time in his dissolute life. He writes her an ardent letter declaring his undying love. But she, full of honor that Onegin can’t fathom, rebuffs him. Though she still loves him, she will not soil her marriage vows. This, too, is her fate. And his. She banishes him from her life, leaving him utterly desolate and destroyed.

Probably the most misguided of all OH’s shows, Onegin looks awful. Even being kind, the production is plum ugly. By setting this tale in the Communist era instead of imperial Russia, director Andreas Hager does injustice to the story’s social commentary and throws Pushkin’s irony out the window. The countryside is represented by a line of dried wheat which looks like a seedy Tiki bar, indistinct side panels that denote nothing, and a mobile screen that rolls around and inadvertently covers the staircase, hiding any of the dramatic entrances.

The doorway at the top is too low, and two actors bopped their heads upon entering. The serfs, sporting cigarettes and coffee cups, might be leftovers from a bus-and-truck Carmen, and their proletariat mufti looked like a mistake. The end of the fatal duel (or strangling contest in this staging) takes place behind the translucent screen, which is a nice touch – probably the only deft touch all evening. At the grand ball, some singers wore gowns, while some stood in the background in black balaclavas. Nothing made sense; there’s no mise en scene; there’s certainly no dramatic cohesion.

The worst offense is the look of Onegin. Even if set in Communist Russia, this man of the world, dripping with soignee attitude, should at least be in some type of uniform – successful, powerful Man of the Party. In a horrid artistic decision, he is dressed in T-shirt and sneakers. With his tousled hair, youthful mien, and slightly wooden attitude, baritone Thaddeus Thorne looks like he stepped out of a boy band. He’s supposed to be a man of the world; older and cold; someone out of Tatiana’s league; not a contemporary. This makes hash out of Pushkin and Tchaikovsky’s intent.

But fortunately, the singing dissolves any objections we have in the wayward visuals. Thorne, though seeming a bit ill at ease on stage, has a clear and strong voice, and he pulled off Onegin’s soaring love declaration with abandon and ardor. Katy Lindhart, as Tatiana, though limited in her expressions and directed to prowl back and forth across the stage in her love throes, was a vocal revelation. Her famous “letter scene” was radiantly sung, a full Russian banquet of girlish delight, indecision, then resolute desire. The voice is there in spades; all she needs is a director to lead her.

Tenor Dane Suarez, as fiery Lensky, could probably be heard on Heights Boulevard. He has a powerful boom and in the intimate Lambert he shook the rafters while he created a fully rounded character. His farewell aria to the world was extremely moving. Mezzo Naomi Brigell was fresh of voice and fresh of face as dewy Olga, whose playfulness leads to the death of her fiancé. We never know what happens to her, but we can be sure her fate is not a happy one.

Prince Gremin, Tatiana’s husband, has one aria, an ode to married life, but it’s one of the most beautiful in the rep. Jason Zacher sang it with heartfelt conviction and plush tone. Jarrett Ward, tenor in the OH chorus, made a delightful appearance as fey French Triquet, who entertains at Tatiana’s birthday party. Mezzos Laura Coale and Molly Burke, as Tatiana’s mother and nurse Filipevna, made strong impressions with their robust, plummy sound. Their folk duet about past lovers and past regrets started the opera on a strong promising note.

Maestro Eiki Isomura led an emotional OH orchestra and chorus, fully immersed in Tchaikovsky’s lush romanticism. The strings needed a bit more rehearsal, but the winds and horns were stirring. Onegin’s “lyric scenes in three acts and seven tableaux” flowed like the Neva, and whoever adapted the score into this more zip-drive version, which eliminated some chorus work and minor scenes, did a masterful job.

Onegin, written before and after Tchaikovsky’s disastrous sham marriage, was his first opera success. He adored the human voice and crafted all his melodies – orchestral, too – so they could be sung. Eugene Onegin sings boldly of youthful dreams dashed and deferred, and adult realities made painfully apparent and full of regret. If you close your eyes, Opera in the Heights does Tchaikovsky proud.

This may be the last opera performed at Lambert Hall, OH’s home since its inception in 1996. Heights Christian Church is for sale, whose property includes the original sanctuary, Lambert Hall. It seems unlikely that developers would keep the old building or build a theater space inside anything that might be developed on the site. OH has been told to move out by July. Feisty and scrappy, OH has been an Houston fixture for 26 years. It may have to relocate, but I expect it will survive. Where it goes is anyone’s guess, but it’s too valuable a home to rising singers, orchestral musicians, and its devoted patrons to disappear. Opera is eternal.