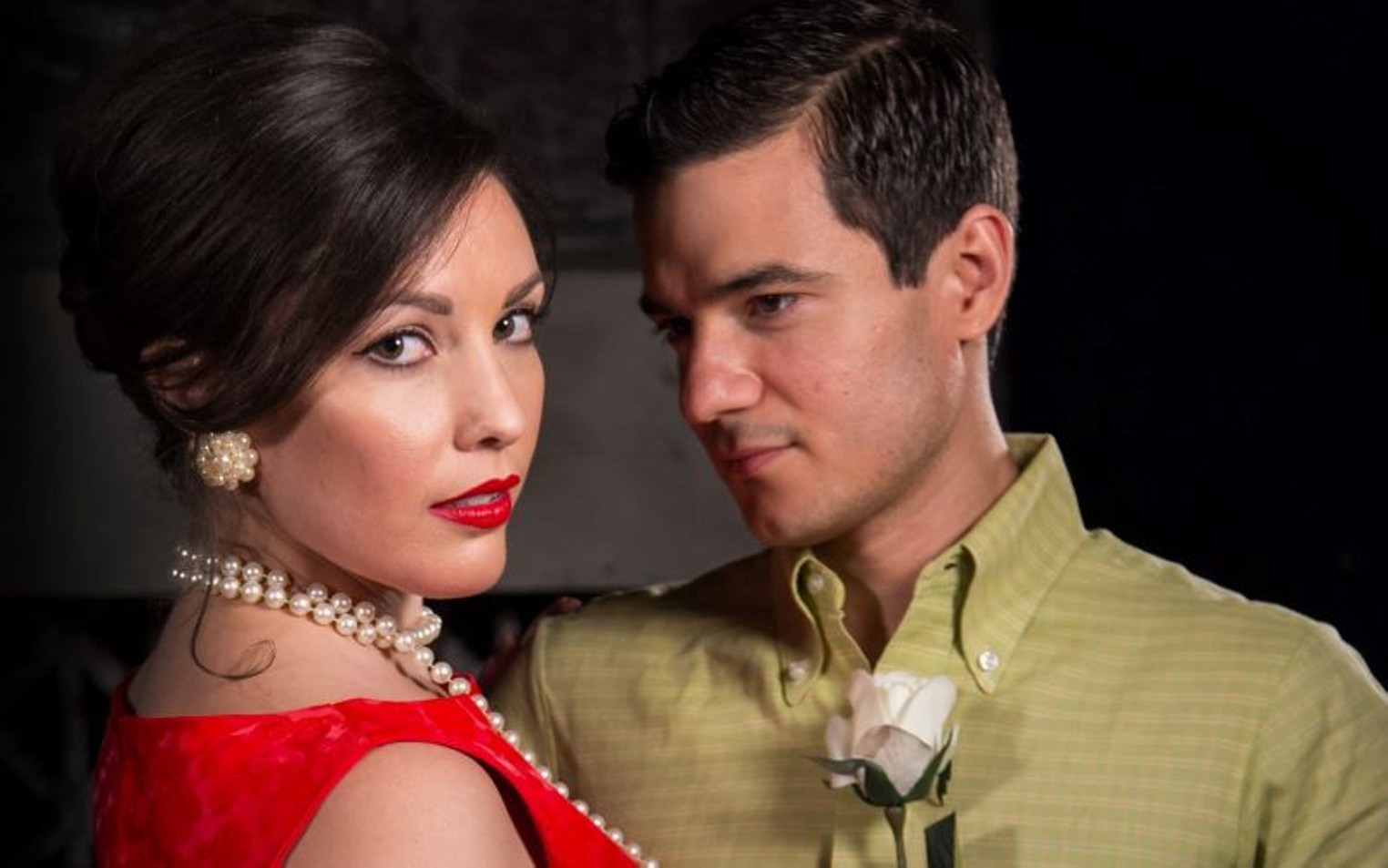 Boy meets girl. They hate each other at first, hurling insults aplenty on either side but gradually come to see each other’s finer points as tension of a different sort grows, the air crackles with electricity and voila, they kiss and fall in love. It’s the bread and butter of countless rom-coms.

Aunt Julia and the Scriptwriter now playing at Main Street Theater falls squarely into this genre, with the distinction being that its characters are based on the real life first marriage of famed writer and Nobel Prize-winning author Mario Vargas-Llosa who fictionalized it himself in his book of the same title. Playwright Caridad Svich has delivered this play adaptation, in both Spanish and English language versions commissioned by  the New York City-based Repertorio Español. This was the English language premiere.

The story begins with young Mario  (Ricardo Hernandez-Morgan) caught up in his law school studies and his job as a journalist in the news department of a radio station in 1954 Lima, Peru. He sits at the kitchen table talking with his Aunt Olga (Marissa M. Castillo) and Uncle Lucho (Michael L. Benitez who does double duty throughout also playing radio actor Francisco) who are trying to help him sort out his future.

Poor stage direction gets us off to an annoying start. For minutes on end, most of the many people seated on the west side of the theater are treated to nothing more than the back of Mario’s head. He talks; we have no idea what one of the two leads looks like. Finally the recently divorced and visiting Julia (Amanda Martinez) sweeps into the room and there’s movement. The static setting is one returned to periodically in the play and could have been solved at least in part by a repositioning of the table or a decision to have Mario stand up and walk around much sooner than he does.

Julia arrives wearing an open kimono robe with a red head scarf covering the curlers in her hair. She’s 32, just divorced and has come from Bolivia to stay with Mario’s relatives to pull herself together and date any number of men to unashamedly find another husband. She belittles Mario calling him “Mariocito,” the derivative commonly attached to children, and calls him a baby. He, predictably enough, is outraged and responds in kind. He finds her “disgusting” and wishes her gone.

Next we see Mario meeting with his long time best friend Javier (Leandro Salazar in an impressive and believable performance) who is critiquing his writing. Mario, we understand, wants to go beyond dry news reports and write compelling fiction, telling stories to capture the imagination. Javier, a poet who, practically enough, recognizes he’ll never be great at his craft and is getting a degree in economics, urges Mario to avoid hackneyed, sappy phrases.

Enter Pedro Camacho (Armando Gonzalez) who, depending on your personal preferences, is the best or one of the most grating parts of the play. He’s the writer extraordinaire brought in from Bolivia to help out the radio station at a time — pre-television in the home — that radio broadcasts were still king (although the arrival of TVs already in America, lurks in the near future.)

Pedro at first disdains to talk with Mario but eventually becomes his mentor while sprouting all sorts of aphorisms about the art of writing and what one must give up to serve the muse to achieve its highest potential. In fact, throughout the play several characters besides Pedro (Lucho and Mario primarily) make frequent reference to writings and sayings from French novelist Balzac and Greek philosopher Plutarch in making whatever argument they are delivering at the time.

It appears, however, that Pedro, however gifted, is beyond eccentric when it comes to the scripts he writes and his tolerance (or rather the lack of) for the two radio actors Francisco and Josefina (Adriane Miller) charged with delivering his lines. The one person he at least initially genuflects to is station manager Genaro (Michael Sifuentes) who is caught in the gastrointestinal middle between his advertisers and a writer of increasingly salacious and outrageous stories that the listening audience loves. Francisco and Josefina, providing the comic relief, are the longtime voice actors at the station who are appalled by and object to the sordid nature of the characters they are compelled to play and Pedro’s frequent accusations against “dirty Argentinians.”

As the play develops, Mario spends more and more time with Julia, accompanying her to movies and spending hours talking with her. Torn between his two mentors: Julia (in a relationship that they are keeping secret from his aunt and uncle) and an increasingly manic Pedro who despite this, seems to hold the key of wisdom to becoming a famous writer, Mario tries to figure out the best next steps in his life.  It all marches along in an expected way — although why Julia reverts to calling Mario a baby late in the play seems a wrong note even if she may be warning him off her.

The costumes are magnificent. After the opening scene which clearly establishes Julia as a bit lost after her marriage break-up, she arrives in one gorgeous dress after another, indicating she is now on her game. They assume a star power all their own. And the detail of putting Pedro, described as a tiny man, in a suit far too large for him so that its sleeves extend down to his fingertips, is costuming genius.

The actors, are enthusiastic and hit their marks with very few muffed lines. They break the fourth wall periodically — primarily Mario — to move the story along and explain their inner thoughts. Hernandez-Morgan as Mario clearly conveys the naiveté of a young man in search of his place in the world, sometimes in excruciating manner.  Martinez as Julia is radiant and practical, unafraid to shock Lucho and Olga with references to sexuality and the prowess of some of her many suitors.

As Pedro, Gonzalez yells so many of his lines that as in a family fight at home, a listener begins to hear the one-note as nothing more than unwelcome noise, without comprehension. His tips on writing become pedantic lectures. However, his final complete meltdown at the station while on the air is vastly entertaining. Never has the word “panties” had so much significance.

The play is just too long. Opening night was not helped by a technical error (a breaker problem) in the second act that brought the whole enterprise to a halt for a few minutes. Including intermission, it clocked in at just under three hours and was not helped by frequent and sometimes lengthy scene changes. If you’re going to call for that many scene changes, for God’s sake figure out a way to execute them more quickly. The use of lighting is also problematic; sometimes we were treated to klieg lights that while making note taking easy, did not serve the production well.

There is a good story here and the play itself may drive audience members to read Mario Vargas-Llosa’s book. This was his first marriage, the one to his aunt (“not a blood relation!) so we know going in what the ending will be. Getting there a little sooner, with fewer speeches and references to Plutarch and Balzac, better stage direction and more nuance in line delivery would help.

So cut some lines. Trim the time spent on those scene changes. But by all means, keep the dresses.

Performances are scheduled through June 5 at 7:30 p.m. Thursdays through Saturdays and 3 p.m. Sundays at Main Street Theater – Rice Village, 2540 Time Boulevard. Proof of a negative COVI test within 48 hours or a vaccination card are required. Masks are recommended but not required. For more information, call 713-524-6706 or visit mainstreettheater.com. $36-$55.