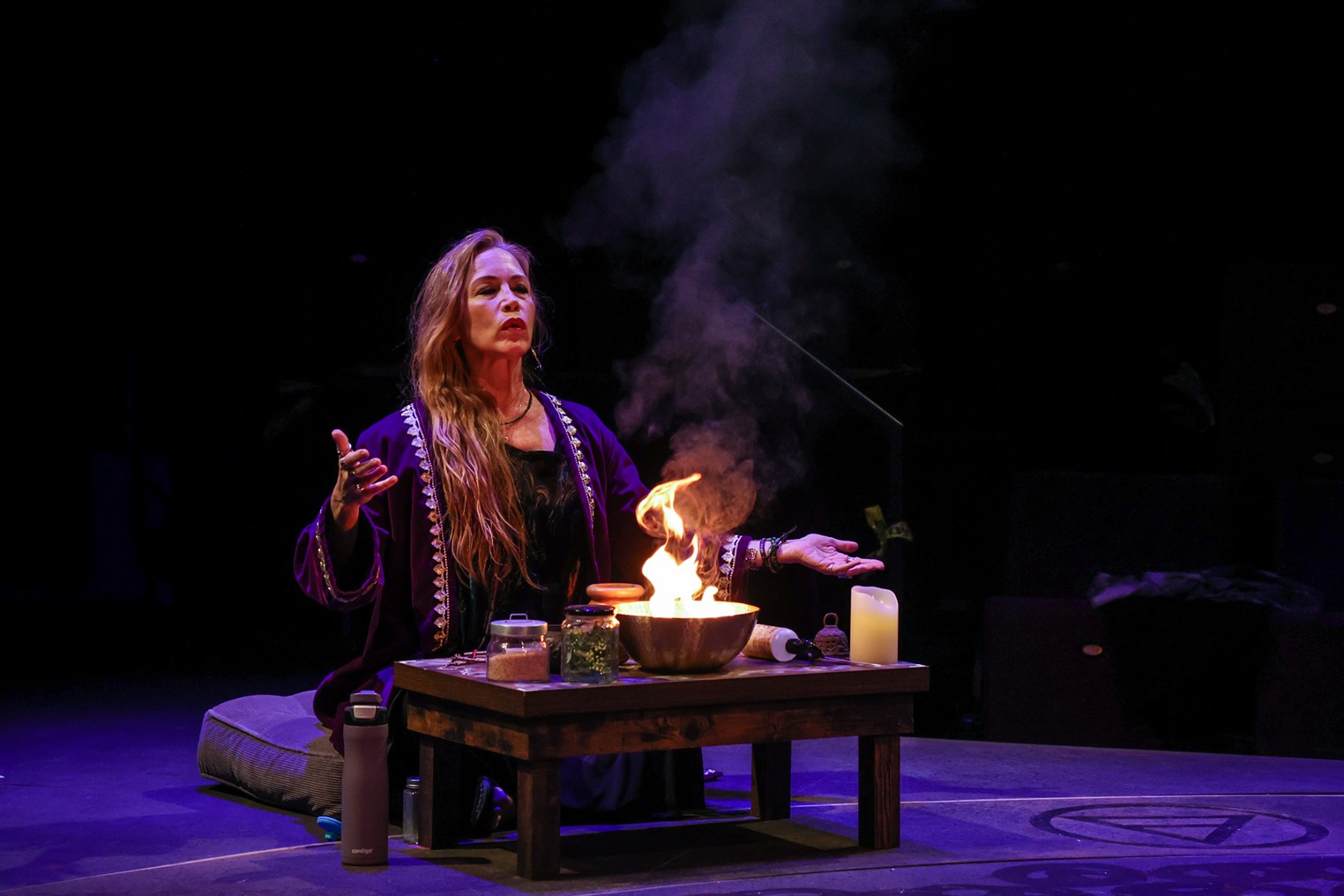 Generally speaking, when it comes to shows concerning socio-political failings, playwrights can either tackle the issues straight on, creating seriously meaty works. Or they can get us juiced up by throwing comedy in one form or another at the problems they wish to explore.

In Sunrise Coven, Houston playwright Brendan Bourque-Sheil has chosen the comedy route to examine no less than the failure of the American health care system. Not a bad choice given the weight and emotional resonance of the subject.

Problem is, the comedy Bourque-Sheil’s slinging here plays like a wise-crack-a-minute fest, far more concerned with sticking the landings of the one-liner jokes than it is employing comedy to drill down on the issues.

For two hours plus, a myriad of healthcare issues are addressed via an endless stream of setups, punchlines, and sit-com-like situations that glide over the edges of all that ail us. Perhaps Bourque-Sheil got so distracted attempting to turn serious into funny, that he lost sight of the real bites he wanted to take out of the dysfunctional way we care for the unwell in this country.

If the comedy in Sunrise Coven is mainstream, the story itself certainly isn’t, and it does add a much-needed element of uniqueness to the show.

Hallie (Susan Koozin) is a saint of a nurse. Always there for everyone, especially the elderly patients she tended at the nursing home in the small town of Buckstop Texas. Problem is, as a result of burnout on the job as befalls so many medical practitioners, Hallie is also a junkie, hooked on oxy for 10 years now. The same oxy she prescribes and sells illegally for profit to the local community with her business partner Ethan (Aaron Ruiz).

We meet Hallie in the hospital post-overdose where no one, not her doctor Annie (Mai Le) or the husband of one of her nursing home patients, Jax (Byron Jaquet) is terribly concerned about Hallie’s addiction. As a side note, if that seems like a narrative omission, just wait until Hallie goes cold turkey from oxy and has not one single withdrawal symptom other than digestive problems.

Not that we needed the full dope sick treatment here, but it seems odd that Bourque-Sheil would write a play about our healthcare system, including addiction, and omit this crucial element.

But then all the characters here are thinly drawn, with little backstory, depth, or connection as to how they got to where they are. Bourque-Sheil has other fish to fry.

Hallie’s addiction isn’t the crux of the show. It’s her loss of eyesight (for reasons unknown) and more importantly, the loss of her nursing license that drive the play forward.

Unable to write prescriptions anymore, Hallie needs a new stream of income. And apparently a new moral compass, as the plan she hatches with Ethan, suddenly turns the pair from the villains of the community into its saviors.

And that’s where the coven comes in.

Before the whole how-do-witches-fit-into-this-play explanation, it’s instructive to know that Sunrise Coven comes from a deeply personal place for Bourque-Sheil. It’s informed by his mother’s end-of-life nursing home experience which included depletion of insurance, less than ideal accommodations, overwhelmed healthcare staff, and his own situational burnout and addiction issues.

Then there’s his mother’s pagan practice, which Bourque-Sheil used to complement her ongoing care – hence the inclusion of a practicing witch, Winter Moon (Carolyn Johnson) into the mix of the play.

It’s an extraordinarily vulnerable thing Bourque-Sheil has done, using such personal and painful moments in this work, attempting to channel his anger into gallows humor. We must offer unbridled admiration for the bravery of the attempt. And the effort isn’t without its fruit.

How and why Winter Moon, Hallie, and Ethan team up as business partners in a newly formed coven will be left spoiler-free, but it’s the closest Bourque-Sheil comes to using humor effectively to take anyone to task – in this case, Big Pharma.

Had he stayed this course, Sunrise Coven might have righted itself. Instead, it gets supernaturally sidetracked by Hallie’s mysterious visions.

Visons in plays are much like dreams in plays, better ideas on the page than the stage. And as Hallie looks time and again to the heavens wondering what it is she’s seeing, even the lighting/projection effects don’t make the experience any less opaque for us. Later when we do finally figure out what they’re all about, the weak payoff feels disappointing.

All of this in the hands of director Leslie Swackhamer doesn’t help matters.

If Bourque-Sheil has written a slight comedy about a heavy subject, Swackhamer has made sure to paint it all with a broad brush.

Mai Le as Annie and Aaron Ruiz and Ethan get the worst of the overacting direction. Le’s Annie is perky doctor personified one minute, fan-girl the next, and explosively angry to follow. Moderation doesn’t factor – it’s ramped up all the way and is funny in ways unintended.

Ruiz as the Lord of the Rings lover, sword-carrying, sweet mountain man dude is easy fodder for big personality. But one dimensional as the character is, Swackhamer takes it to farce extreme by throwing in goofy physical humor to match his already central casting treatment.

There’s no doubt that for Hallie’s cynical, no-nonsense, tough-talking sensibility, Susan Koozin is good casting. Koozin’s gravelly voice and ability to bristle are legendary in Houston. But for heaven’s sake, give the woman something else to do but scowl, eye-roll and pace aggressively on stage.

Swackhamer keeps Koozin on one setting like a broken speed bike the entire show, sapping all her prowess and dumping it into a stagnant performance.

Not surprisingly, the least complicated characters receive the most lighted directorial hand. Jaquet as Jax is allowed to be the sweet old man as he was written. Johnson as the spiritual Winter Moon delivers quite a steady and mercifully unflashy performance.

Sure, we have no idea why she’s a witch, how she got to be a witch or anything else about her. But as mentioned, insight or depth for any character is not an ingredient in the recipe of this play.

Ultimately, it doesn’t seem like Bourque-Sheil was trying to solve or provide solutions in Sunrise Coven. Or even show us things we weren’t already aware of. It’s near impossible to be a long-term nurse and come out unscathed. Addiction rampages our communities. Drug prices are criminal. Being a caregiver to a parent or a spouse can eat you alive.

Until things change, laughter is the best way to deal with it, posits Bourque-Sheil. It’s not a bad suggestion, it’s just not necessarily a narratively fulfilling one.