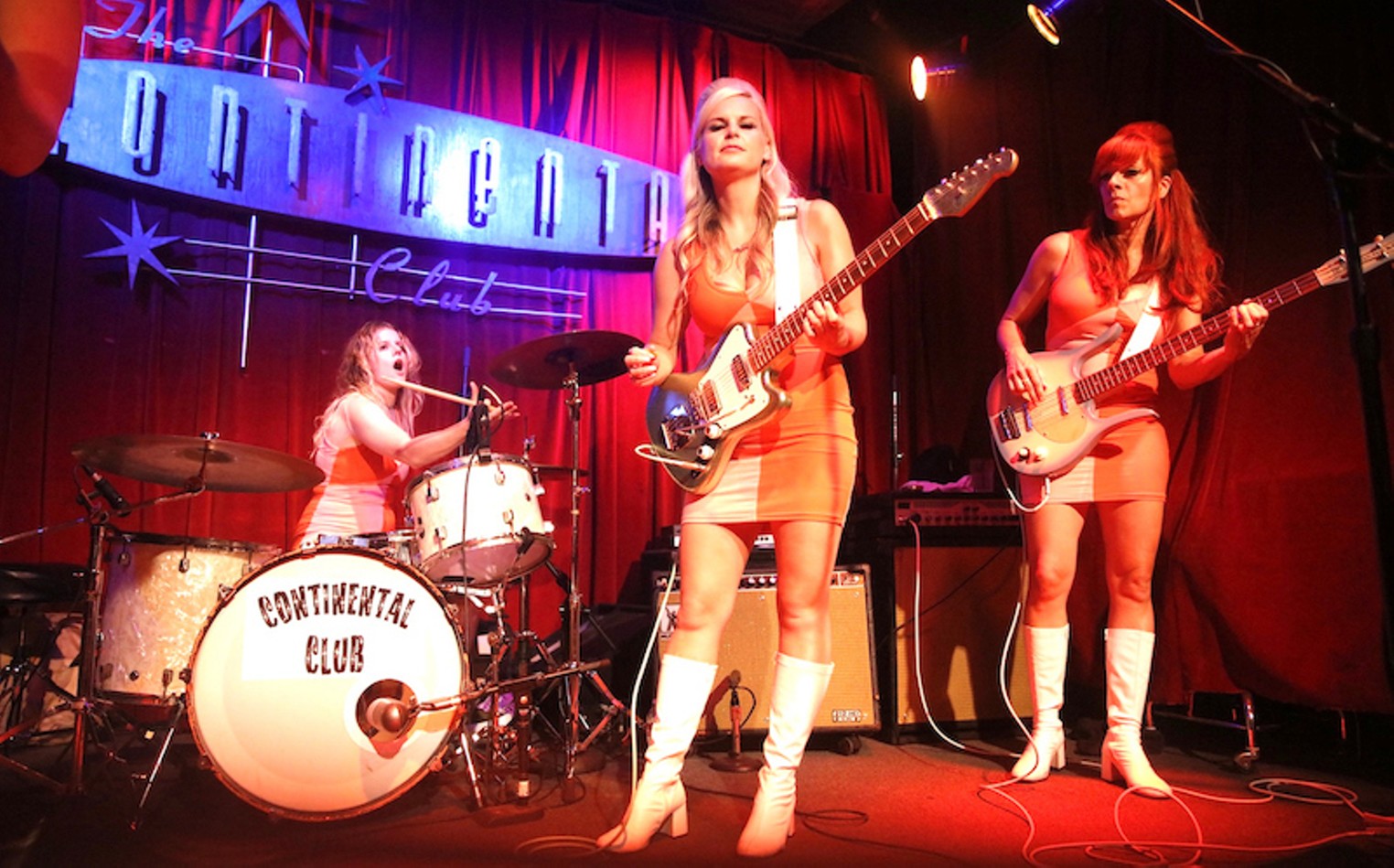 The Surfrajettes/VOLK
The Continental Club
August 12, 2022

When you think of “surf rock,” your mind probably conjures images of Waimea Bay or Teahupoo, of tanned dudes and dudettes waiting for their set as the sun gilds the waves.

In other words you’re probably not thinking of Toronto.

But the beauty of music is its universality. Dick Dale and Jan and Dean may have honed that reverb sound in SoCal, but the era of locational authenticity (to coin a phrase) is long over, and if the Surfrajettes are any indication, that’s a very good thing indeed.

Guitarists Shermy Freeman and Nicole Damoff, bassist Sarah Butler, and drummer Sam Maloney rolled into Houston last night in support of their debut album Roller Fink. It’s an album — and tour — that answers the question, “Is it possible to breathe new life into what is by now a somewhat creaky genre of music?”

It definitely helps that the show took place in The Continental Club. In a city full of jumped-up corporate music venues, the Continental is a breath of fresh air. And I mean that in the figurative sense, because it remains as dank as ever. And yet, it’s somehow fitting for music that feels slightly out of time.

Case in point: VOLK. The cowpunk outfit out of Nashville told us they were here to usher us into the “sexy dude ranch from outer space” before the “sexy luau” stylings of the Surfrajettes and indeed they did. Eleot Reich (drums/lead vocals) and Chris Lowe (guitar/vocals) are also supporting a first album (Cashville), but their sound is rawer, more urgent. Think the White Stripes if Jack didn’t take himself so goddam seriously.

And even that’s not entirely fair. Reich’s voice swerves from Exene Cervenka-like urgency to Emmylou Harris style tenderness, but don’t let that diminish the punch of songs like “Welcome to Cashville” (with it’s well-received Davy Crockett shout-out), or their (unrequited) love letter to Dwight Yoakum (“Little Games”), or their cover of Ray Wylie Hubbard’s “Snake Farm.” VOLK’s sexy dude ranch welcomes everyone, as long as you’re not an asshole.

The Surfrajettes would seem an … interesting companion to their opening act, given their more traditional approach to their subject matter. Decked out in minidresses, go-go boots, and beehive hairdos, one could be (initially) forgiven for wondering if this wasn’t mostly a shtick. On one hand, everything’s a shtick. On the other, the Surfrajettes have clearly worked their asses off to hone their craft.

Freeman and Damoff traded solos on cuts both uptempo (“Couch Surfing”) and not so much (“Roxy Roller”), while Butler nailed down the beat on their cover of “Heart of Glass” and Maloney tore it up on the likes of “Surfer’s Slide.”

The title cut to “Roller Fink” was written, according to Damoff, as a response to someone who told them “they couldn’t write fast songs.” I’m not sure who the idiot in question was, but after watching Damoff (on her Fender Strat) and Freeman (on a green flake Creston) trade solos, it’s clear their virtuosity isn’t up for debate.

Yes, the retro stylings are about as venerable as one of rock’s subgenres get, but looking past the beehives (think the B-52s if their music didn’t make you want to beat yourself in the head with a tack hammer), the Surfrajettes also put their spin on an impressive array of covers, including the aforementioned “Heart of Glass,” “She Loves You,” “In-A-Gadda-Da-Vida,” and Britney Spears’ “Toxic,” which served as last night’s encore.

Admittedly, a shouted request for “YYZ” was met with a “Yeah, fuckin’ right” from Damoff.

However venerable we may think surf rock or cowpunk might be, last night’s show proved that as long as bands like the Surfrajettes and VOLK are there to bring fresh blood to those genres, we’re in good hands.

Nicole Damoff has no time for your Rush requests.

Personal Bias: Big surf rock fan, despite never having ridden a board in my life.

The Crowd: Bettie Page enthusiasts and Parrotheads if they’d listened to music released in the last 40 years.

Overheard In The Crowd: “You know, I used to bartend some myself.”

Random Notebook Dump: “How big an asshole am I if order a Pabst?”