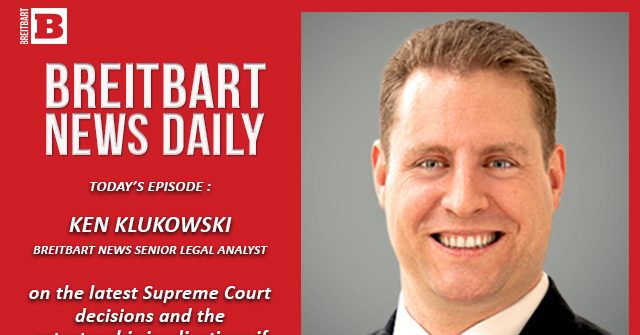 Host Alex Marlow begins today by breaking down the latest effort by the Republican Party to sell out their own voter base by compromising with the Democrats on gun controls, particularly a proposed massive expansion of subjectively applied “Red Flag Laws.” They want a federal fund that will inevitably be used to harass law abiding citizens. This is really bad news, and Alex breaks it all down. Next up for the RINO caucus? Amnesty! Not a joke!

There is good news though: Kellogg’s has announced it is going to have to break up. Alex recalls Breitbart’s efforts to boycott the woke food brand six years ago; since then, the company’s stocks have been flat, if not down, and now Kellogg’s is finally throwing in the towel.

Our guest today is fan-favorite and Breitbart News Senior Legal Analyst Ken Klukowski. Ken recaps a big victory for religious liberty delivered this week by the Supreme Court, he lays out the stakes of the forthcoming Dobbs abortion decision, and then he analyzes whether the current proposed gun controls will withstand constitutional challenges. You won’t want to miss his answer. And then we have our call of the day.

The Breitbart News Daily Podcast runs Monday through Friday as a “Director’s Cut” of the SXM Patriot radio show. Hosted by Breitbart Editor-in-Chief Alex Marlow, you’ll hear Alex’s take on the big political stories, interviews with various newsmakers, and the Patriot “Caller of the Day.”

SUBSCRIBE for free by clicking your preferred podcast platform below.