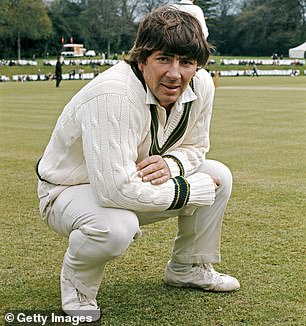 Rodney Marsh, pictured here on the 1972 Ashes tour of England, was a cricketing giant

Another one of the greats gone too young.

The shock death of legendary wicketkeeper Rod Marsh at the age of 74 has shot an arrow through the heart of every kid who watched the Australian cricket team redefine the image of the game in the 1970s and 80s.

I should know. I was one of them.

Marsh was the opposite of everything an international athlete was meant to be.

He didn’t look particularly fit, he loved a beer and he was as anti-establishment as you could get.

In fact, it was a conversation with his brother, millionaire golfer Graham Marsh, which was one of the catalysts that led to the greatest revolution the game had known, World Series Cricket.

‘How much do you get to play a Test?’ Graham asked.

Marsh is seen in 1975 enjoying a beer with Sunil Gavaskar of India. The Australian legend once drank 45 cans of beer on a flight from Australia to London

His older brother’s shock just strengthened Marsh’s resolve to get a better deal from cricket authorities, and when fast bowler Dennis Lillee’s manager John ‘Strop’ Cornell took the idea of a breakaway competition to Kerry Packer in 1977, he was one of the first to sign up.

It was a huge coup for Packer because Marsh, along with fellow West Australian Lillee, the Chappell brothers, and youngster David Hookes were already superstars, albeit vastly underpaid.

To those of my era they were more than cricketers. They were folk heroes as they strode across the hallowed turf of the MCG and Lords, unshaven with their gold chains swinging and shirts unbuttoned.

It was a different time. They played hard, and they partied hard.

Marsh’s nickname ‘Bacchus’ originated from the Melbourne suburb Bacchus Marsh, but it could have just as accurately derived from the name of the Roman god of wine.

In his humorous 2004 book ‘According To Skull’, former Test spin bowler Kerry O’Keeffe lifted the lid on the first of the legendary drinking competitions on the Qantas flight from Sydney to London for the 1977 Ashes Tour.

As O’Keeffe recalled, it was always going to be a two-horse race between Doug Walters and Marsh.

Putting together a fantasy form guide, O’Keeffe saw their chances this way:

‘Doug Walters (5-2): Entitled to favouritism. Has undeniable results over long distances. Trained to the minute. A real stayer. Will be hard to run down over the final stages. Possibly has two livers.

Rod Marsh (3-1): Proven over the course. Possesses billiard table legs that are capable of holding litres for long periods. Genuine threat to the favourite if he can pace himself. Very tough down the straight.’

It was a hard-fought contest, with O’Keeffe noting in the book that the two favourites were neck and neck as Heathrow came into sight.

‘They look shabby. Marsh has fallen asleep and there is saliva making its way down his chin. Walters is attempting to light the filter of his sixtieth cigarette for the journey.

‘Suddenly we’re touching down. The judges are tallying the ticks that have been meticulously recorded on an air sickness bag and we have a winner – Doug Walters with 44 cans. Marsh is second with 43 and subsequently declares he’ll better that the next time he flies to London.

‘Marsh did in fact go on to establish a new mark of 45 cans a few years later and was escorted off the plane in a wheelchair. Pundits thought that record would stand for a long time but along came the Launceston bulldog, David Boon, who posted 53 cans on his flight, a new mark which will probably last forever.’

But while Marsh proved himself a champion drinker, he was an even better cricketer.

While he earned the cruel nickname ‘Iron Gloves’ due to dropped chances early in his career, he soon left those days behind him as he established himself as arguably the best keeper in the world.

The notation on the scoreboard: ‘Caught Marsh, bowled Lillee’ became the epitaph for 95 Test batsmen, making theirs’ the most prolific keeper-bowler partnership in the games’ history.

Marsh batting during a Prudential World Cup match in the UK in June, 1983

Marsh made it look easy, but it wasn’t.

The pounding that his hands took from the thunderbolts sent down by Lillee and Jeff Thomson over the four or five days of a Test was so painful that he would put raw steak in his gloves in a vain attempt to absorb the punishment.

Marsh was also a swashbuckling batsman who could save an innings when required but loved nothing better than swinging for the fences.

How hard did he hit the ball? Well, on one notable occasion he connected with such force that he broke his bat in half. The look on his face as he ran through for a run while gazing down in shock at the shattered handle in his hand was priceless.

And while he was known as something of a larrikin, there was no doubting his great love and respect for the game.

In the Centenary Test in 1977, England batsman Derek Randall was playing the innings of his life and looked like snatching the win from Australia’s grasp.

On 161, he edged a Greg Chappell leg cutter to Marsh who dived to take the catch then rolled on the turf. The Aussies went up in appeal and umpire Tom Brooks raised his finger.

As Randall headed to the MCG dressing rooms, Marsh walked to Brooks and informed him that the ball had hit the ground. Randall was recalled and went on to make 174.

As one commentator wrote, ‘Considering the state of the match, and the importance of Randall’s wicket, it was a gesture of sportsmanship seldom witnessed in history.’

At the other end of the sportsmanship scale was the notorious underarm ball bowled to New Zealand’s Brian McKechnie by Australia’s Trevor Chappell on the instructions of his brother and captain Greg in 1981.

In footage of the incident, as the Chappell brothers confer at the bowler’s end and it becomes obvious what is about to happen, Marsh can be clearly heard calling out to his longtime friend and skipper, ‘No mate’.

When his playing days were over Marsh continued to make a major contribution to cricket, not only in Australia but internationally as a teacher, mentor and administrator.

He was also head of selectors for the Australian Test side, which caused problems for current players the Marsh brothers, Mitchell and Shaun, who were regularly sledged by opponents claiming they were only in the side ‘because your Dad picked you.’

In fact the pair are the sons of another former player, Geoff Marsh, and no relation to Rod.

When Rod was head of the Australian Cricket Academy in Adelaide in the 1980s, I would ring him from time to time to talk about the old days and the times to come.

I remember once asking him about the best fielder he had ever played with.

Marsh was a former chairman of selectors for the Australian cricket side. Current players the Marsh brothers, Mitchell and Shaun (pictured with wife Rebecca O’Donovan) were sledged by opponents claiming they were only in the side ‘because your Dad picked you’. In fact, the pair were no relation to Rod

He spoke about Ross Edwards and Greg Chappell, and then brought up a name I had never heard before.

‘We’ve got a kid here at the academy who leaves them all for dead,’ he said. ‘You’ve never seen anything like him.’

‘Ricky Ponting. Write it down.’

Another time I asked him about the glory days of Ian Chappell’s all-conquering Test team.

‘Well, we had something that no other team did. That was the difference,’ he said.

They also had something else that no-one else did, and never will.