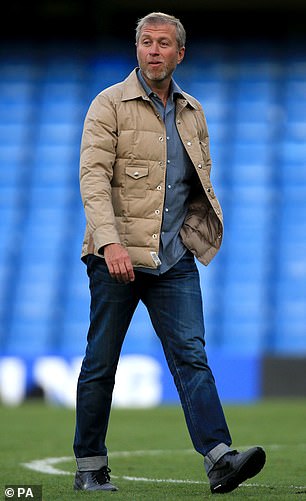 REVEALED: Roman Abramovich has a large shareholding in the Russian steelmaking firm whose materials are claimed to be used to make TANKS – as analysts say Chelsea owner transferred his shares eight days before the invasion

By Ian Herbert and Sami Mokbel for the Daily Mail

The Chelsea owner transferred his shares in Evraz, the Russian steelmaking giant, directly to himself from an offshore company on February 16, just over a week before Vladimir Putin ordered the Ukraine invasion.

Analysts have told Sportsmail that the transfer of the 28.64 per cent shareholding, from Virgin Islands-registered Greenleas International Holdings Ltd, could make it less vulnerable to the sanctions which have followed the invasion. It could also make the shareholding easier to sell. The value of the shares have plummeted since Putin’s forces attacked Ukraine.

Grzegorz Kuczynski, director of the Eurasia Program at the Warsaw Institute, told Sportsmail: ‘There was a risk that this offshore company would become a subject of sanctions.’

Mr Kuczynski also said that the steel company’s material was used to make tanks and was a significant part of Russia’s military campaign in Ukraine.

He said: ‘Evraz steel is used to build tanks, amongst other things. The company is important for the Russian arms industry, in this sense. It is important for Russia’s war plans, including with regard to Ukraine.’

But a spokesperson for Abramovich insisted that Evraz steel manufactured in Russia was not used for military. The spokesperson said the Russian produced steel was only used for ‘rail and construction.’

The Chelsea owner transferred his shares in Evraz, the Russian steelmaking giant and whose steel is used for tanks

In a 2017 document produced by Evraz as part of an investigation into steel importation in the US, the company said its Chicago operations produced ‘several products critical to US National Security… such as armoured plate for US military.’

The Warsaw Institute, an international relations think tank specialising in Eastern Europe, is uncertain whether Abramovich also owns shares in the Russian oil giant Rosneft, having invested nearly £225million in shares when it floated in 2006.

Rosneft is one of Russia’s largest producers of crude oil and another major supplier of its military. The Rosneft website, which includes company details, was not accessible from the UK yesterday.

Abramovich can ill-afford a prolonged war and sanctions designed to strangle and collapse the entire Russian economy, because he has so much invested in it.

But the view from the ground in Kyiv is that the exercise is entirely futile, because there is simply no common ground between the invading and invaded country.

Russia is demanding international recognition of Crimea, the retention of all lands it has occupied in this invasion and the replacement of the Ukrainian government. None of these demands are remotely acceptable to Ukraine.

Abramovich can ill-afford a prolonged war and sanctions designed to strangle and collapse the entire Russian economy, because he has so much invested in it

Abramovich announced on Saturday that ‘stewardship and care’ of Chelsea was being given to trustees of the club’s charitable foundation.

But Sportsmail understands that the six trustees will insist on a rock-solid insurance policy before agreeing to the 55-year-old’s plan, with a number of them still extremely apprehensive about accepting stewardship at all.

One of the main conditions trustees would insist on is the inclusion of a robust indemnity insurance policy, to ensure they are not liable for any financial ramifications the club may suffer while they are put in charge.

Chelsea are aware of the problems they may face in convincing trustees and are thought to be exploring other options, including a holding company being set-up to take on stewardship responsibilities instead.