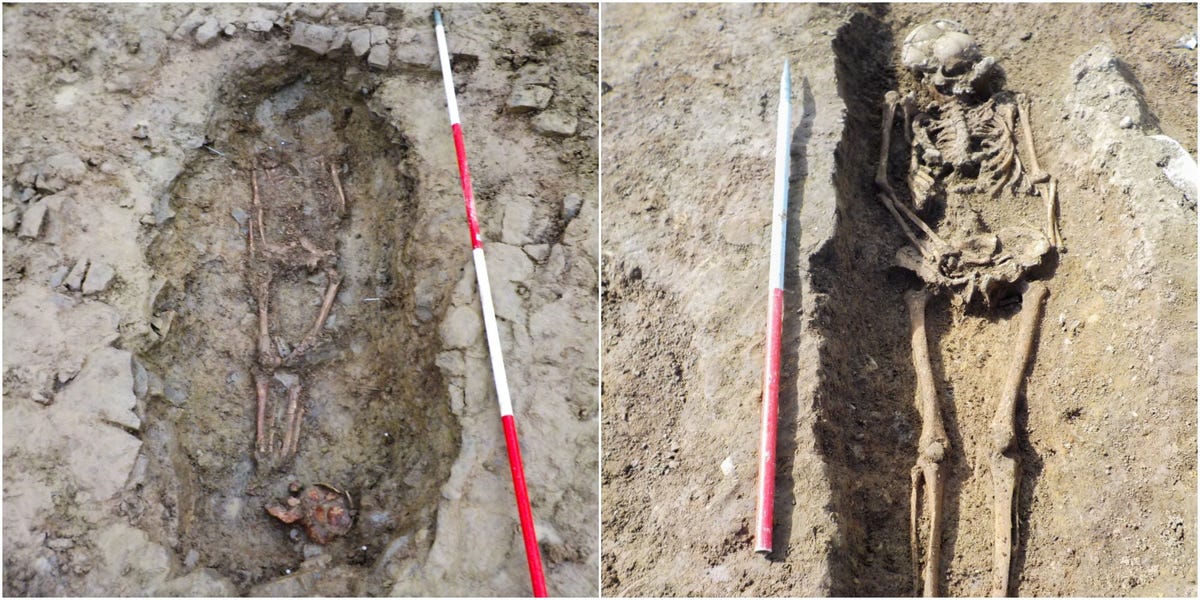 Archaeologists in the United Kingdom have uncovered a Roman-era mercenary buried with his sword and a mysterious beheaded skeleton.

The Vale of Glamorgan council in Wales hired rubicon Heritage Services to assess a road they wanted to be straightened.

It led to the discovery of an extensive trove of archaeological artifacts and hundreds of graves dating back thousands of years.

In one section of the five-mile road was a collection of Roman artifacts and several skeletons, Mark Collard, the managing director of Rubicon Heritage who is leading the project, told Insider.

One is believed to be a mercenary, buried with a large sword and a military broach, dated to the period that the “Roman Empire fell apart in Britain,” Collard said.

Nearby was another skeleton of a decapitated man, buried with his head by his feet.

In 2019, in a Roman graveyard in Suffolk, England, archaeologists found the same corpse configuration in 17 decapitated skeletons whose heads had been removed after death, it’s believed.

It remains a mystery what the practice symbolized. One theory suggests a link to a pagan belief system of pre-Roman Celtic tribes who considered the head was the container for the soul, archaeologists told Live Science.

Both men in Wales were buried on a large hill with “fantastic views over the countryside. You have to think there must be a reason for that,” Collard told Insider.

Collard said that another excavated section of the road revealed a burial site from a later period that also raised many questions.

In the middle of a field lies a once-hidden medieval burial ground, uncovered by Collard and his team, that holds 450 bodies.

People returned to the burial ground for roughly 500 years — from the sixth to the thirteenth century — to bury their loved ones there. “It’s unusual that they’re buried effectively in the middle of a field. It’s not near a church. And that’s one of the things we’re puzzling about why people would go back for so long to bury people at the top of this mound,” said Collard.

The team is undertaking a detailed analysis of the remain, checking for family links to the bodies, signs of diseases or injuries, or clues about diets.

The team behind the excavation has released an e-book detailing the project called the “Five Mile Lane,” which describes what has been found so far, including Bronze Age cremations, an arrowhead, and a 3000-year-old roundhouse.

The detailed findings will be published at the end of 2022.

“Archaeologists always say, we didn’t expect to find this much, and in this case, we really didn’t, because the preceding surveys didn’t raise many hopes. But it has proved to be an incredibly densely occupied prehistoric, Roman, and later, landscape with lots of activity from 4000 BC to the Second World War,” Collard said.