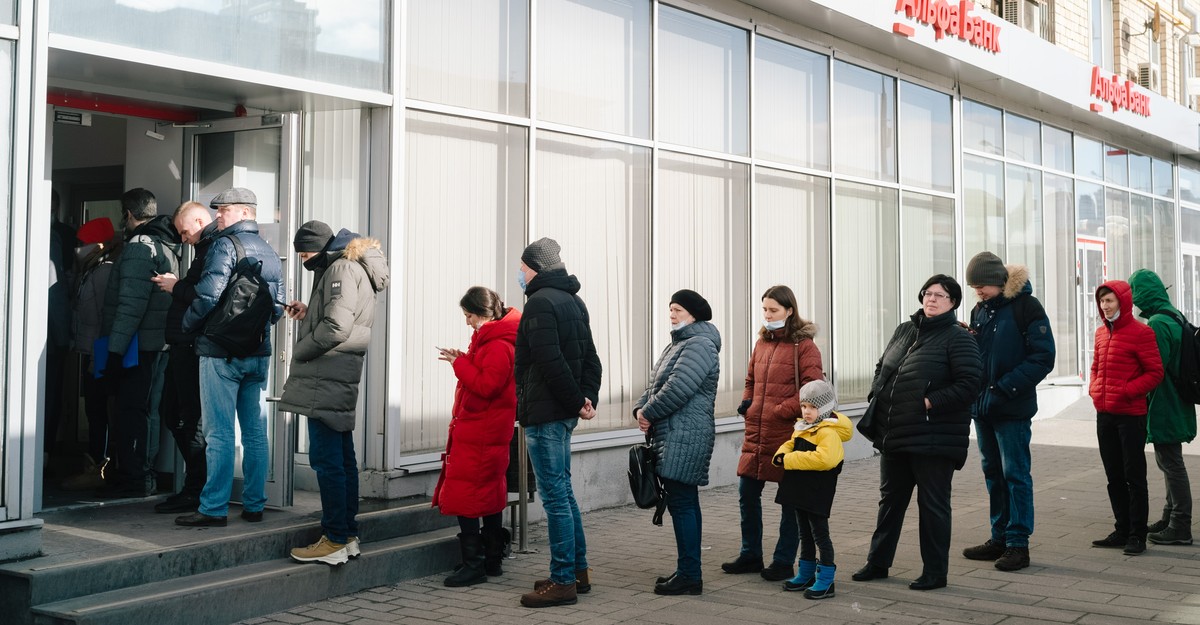 The war in Ukraine is being fought on two battlefields. The first battlefield is geographic. It is the land Russia is tearing up with tank treads and pounding with missiles.

The second battlefield is made up not of physical particles, but rather of relationships—contracts and promises between nations, banks, companies, and individuals. This is the economic arena.

While Russia holds the military advantage over Ukraine on Battlefield One, it is getting destroyed by a Western alliance on Battlefield Two. In the past few days, the United States and several major European countries have declared a series of financial penalties and sanctions against Russia that are without modern precedent for a major economy. These policies are triggering a financial catastrophe in Russia.

Getting a proper grip on the second battlefield requires breaking down the news of the past several days into three categories: the global boycott of Russia, the economic crisis within Russia, and the worldwide ripple effects that we’re already starting to see.

A global boycott of the Russian economy

Over the weekend, the U.S. and many European countries announced their intention to cut off several Russian banks from the trading platform SWIFT—the Society for Worldwide Interbank Finance Telecommunication. This will prevent many Russian banks from trading at high volumes. The indirect effect is more important: A Russian bank that’s been kicked off SWIFT becomes an undesirable place to keep money.

The U.S. Treasury and the European Central Bank also announced that they would freeze Russia’s foreign reserves. What does that mean? The Russian central bank holds hundreds of billions of dollars that it can convert into rubles during a crisis to prop up the currency. By freezing the reserves held in Western banks, the U.S. and Europe are disarming Russia of its best weapon in the event of a currency crisis, essentially telling Russia: “Your assets are momentarily worthless. You don’t have $300 billion worth of assets. You have $0.”

Companies are boycotting Russia too. BP and Shell have announced plans to exit their joint ventures in major Russian energy companies. Some countries are now refusing to do business with Russia entirely. Russia has also been banned from international soccer, hockey, and ice-skating events. These actions amount to the sudden cultural excision of an entire nation.

A looming economic collapse within Russia

Although its geopolitical strategy puts it at odds with the West, Russia is an integrated member of the global economy. Only 12 countries in the world have more total exports. Russia trades oil, gas, and coal to much of Europe and wheat to the Middle East and Africa. The sanctions imposed so far amount to a kind of siege of a country that depends on access to global markets.

This is terra incognita for economic policy. No country has ever faced this kind of global freeze-out. The implications are hard to predict, but several consequences are already apparent in the form of bank runs and long ATM lines. On Monday, the London stock listings of several Russian banks fell by more than 50 percent. The ruble is trading like a junk cryptocurrency, collapsing more than 30 percent on Monday, and as it weakens, the price of certain imports will rise sharply. Unemployment will soar unless the central bank steps in to print money in order to keep companies afloat, but this will almost certainly cause even worse inflation. To throttle the worst inflationary effects, the Russian central bank doubled its key interest rate to 20 percent; for perspective, that’s higher than the U.S. federal-funds rate has ever been. Businesses are nervous that SWIFT sanctions will shut down international credit-card accounts. In normal times, the worst effects of most depressions aren’t felt for months. This has all happened in the past 72 hours.

Russia’s economic crisis could spark a brain drain. More young Russians are reportedly trying to emigrate. Today’s problems could set the stage for a long-term decline in Russia’s prosperity, as people with the means and motivation to get out move west. Migrants will, however, face a mobility problem: The European Union has closed its airspace to Russian planes and private jets. The country is sealed off—from Western trade, Western travel, and (apart from energy exports) most Western business.

In the next few weeks, the world is going to get a chaotic lesson in economic interdependence. As The Wall Street Journal reports, Russia and Ukraine together account for about 20 percent of the world’s corn exports and 80 percent of its sunflower oil. More than a dozen countries rely on Ukraine for more than 10 percent of their wheat consumption. Automotive companies rely on Ukraine for wiring systems, and much of the world relies on Russia for oil, aluminum, and palladium, which is used for car parts and jewelry.

As the war breaks Ukraine and cripples Russia, it will send ripple effects across the world, including wheat shortages, food inflation, and rising oil prices.

And those are just the obvious, first-order effects. Bradley Jardine, a global fellow at the Wilson Center, a nonpartisan research organization, writes that Tajikistan, a small Central Asian country north of Afghanistan, relies on remittances from Russia for more than 20 percent of its GDP. That means if workers in Russia stop sending money to their families in Tajikistan, that country’s economy could nose-dive into a depression. Economic crises can spark political revolutions, and Tajikistan shares a border with China’s westernmost province, Xinjiang. Russia’s crisis could, then, become a Central Asian economic crisis, which could become a Chinese political problem. What happens in Russia will not stay in Russia.

We should not root for punitive calamity in Russia. The suffocation of the Russian economy might be morally justified, given the ruinous invasion of Ukraine, but these measures are without precedent. Maybe the sanctions will work, by driving Putin to the negotiating table. Or maybe they will make him feel cornered and cause him to lash out in a catastrophic way—committing suicide for fear of death, as Otto von Bismark put it. This was Vladimir Putin’s war to start. It will be Vladimir Putin’s war to end. But it falls to the West to convince Russia’s leader that he has the most to gain by bargaining rather than bombing.