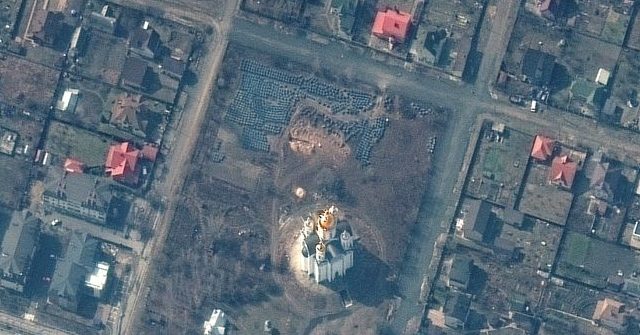 Space imaging company Maxar Technologies published satellite images over the weekend that appear to show earthworks of a mass grave in the wake of the withdrawing Russian army at Bucha, Ukraine.

Reuters reported on Sunday its journalists on the ground in Bucha had witnessed a mass grave at a church, but could not confirm if it was the same site that Maxar’s satellites pictured (see above).

The photos surfaced after the publication of shocking images from Bucha this weekend following the departure of Russian forces, taken by journalists for Getty Images, the Associated Press, and other international institutions. The photos showed Bucha’s streets littered with corpses, incinerated vehicles, and war debris. Ukrainian officials claim some of the corpses had their hands tied and showed clear signs of being civilians, indicating war crimes had taken place.

Russia has characteristically denied any involvement with the mass graves or any other evidence of atrocities and is calling for a U.N. Security Council meeting to condemn Ukraine for accusing Russia of war crimes in Bucha. Going further, Russian officials accused Ukrainian soldiers of committing atrocities against the country’s own civilians.

Maxar published two images of the site of Bucha’s Church of St. Andrew and Pyervozvannoho All Saints, one reportedly taken on March 10 and another on March 31. The first appears to show excavation; the latter a mound of soil that suggests burial. Maxar reportedly did not attempt to independently confirm that the site was a mass grave with on-the-ground research, but did refer to a “grave site” on the photos, according to Reuters.

NEW: A mass grave has been identified in Bucha, Ukraine, northwest of Kyiv.

The first signs of the excavation were seen on March 10th. More recent coverage on March 31st shows the grave site with an approximately 45-foot long trench.

Reuters added to Maxar’s reporting by stating that its journalists in Bucha found mass graves.

“Reuters journalists who visited Bucha on Saturday saw bodies lying on the streets of the town, 37 km (23 miles) northwest of the capital Kyiv,” the news agency asserted. “A mass grave at one church was still open, with hands and feet poking through the red clay heaped on top.”

“Reuters could not immediately verify the images. It was not clear if the images disseminated by Maxar were of the same church visited by Reuters journalists on Saturday,” it added.
Ukrainian Defense Minister Dmytro Kuleba accused Russian forces of “killing civilians while leaving … just because they wanted to kill” in remarks this weekend following reports that Russian military officials were reconfiguring their presence around Kyiv. Other Ukrainian authorities claimed that incoming troops counted 410 bodies on the streets of several towns in the Kyiv suburbs.

Ukrainian President Volodymyr Zelensky accused the Russian government of “genocide” in an interview with CBS’ Face the Nation on Sunday.

“Indeed, this is genocide. The elimination of the whole nation and the people,” Zelensky said, adding, “We are the citizens of Ukraine and we don’t want to be subdued to the policy of Russian Federation. This is the reason we are being destroyed and exterminated, and this is happening in the Europe of the 21st century. So this is the torture of the whole nation.”

A funeral procession for Ukrainian soldier Dmitry Zhelisko makes its way to the cemetery on April 03, 2022 in Rusyn, Ukraine. Zhelisko died fighting the Russian army near the town of Kharkiv.  (Joe Raedle/Getty Images)

In remarks to the Ukrainian people on Sunday, Zelensky referred to Russian forces as “concentrated evil.”

“After what was revealed in Bucha and our other cities the occupiers were expelled from. Hundreds of people were killed. Tortured, executed civilians. Corpses on the streets,” Zelensky announced. “Mined area. Even the bodies of the dead were mined!”

I want every mother of every Russian soldier to see the bodies of the killed people in Bucha, in Irpin, in Hostomel. What did they do? Why were they killed? What did the man who was riding his bicycle down the street do? Why were ordinary civilians in an ordinary peaceful city tortured to death? Why were women strangled after their earrings were ripped out of their ears? How could women be raped and killed in front of children? How could their corpses be desecrated even after death? Why did they crush the bodies of people with tanks?

“The bitches were running away, losing their ammunition. They looted everything,” a quote from an unnamed alleged civilian in Ukrinform read. “They went from house to house and took away even women’s panties. Tell me: they don’t have panties?”

“We categorically reject any accusations. Moreover, we believe that this issue should be discussed at the highest possible level”, spokesman for Russian leader Vladimir Putin, Dmitry Peskov, said following the accusations. Russia’s state outlet Sputnik added that Peskov claimed the Russian Defense Ministry “revealed signs of video forgeries and various fakes regarding the materials from Bucha.” Sputnik added that other Russian officials claimed that “Ukrainian forces shelled the city after Russian troops had already withdrawn.”

With Russian forces having pulled back from their northern positions near Kyiv after encountering fierce resistance, counter-attacking Ukrainians and photo-journalists have encountered scenes of devastation https://t.co/OapB2GdGTH

“I would like to emphasize with full responsibility that not a single civilian suffered from violence when the town was controlled by the Russian Armed Forces,” Antonov said, Russian news agency Tass reported on Monday. “On the contrary, our troops delivered 452 tonnes of humanitarian aid for civilians.”

“Meanwhile, the fact that the Ukrainian Armed Forces shelled the town of Bucha right after Russian troops had left was deliberately ignored in the US. This is what could have caused civilian casualties. That said, the Kiev regime is clearly trying to blame its atrocities on Russia,” he added.

The Russian government announced on Monday that it will demand a special U.N. Security Council meeting to condemn Ukraine for the situation in Bucha.