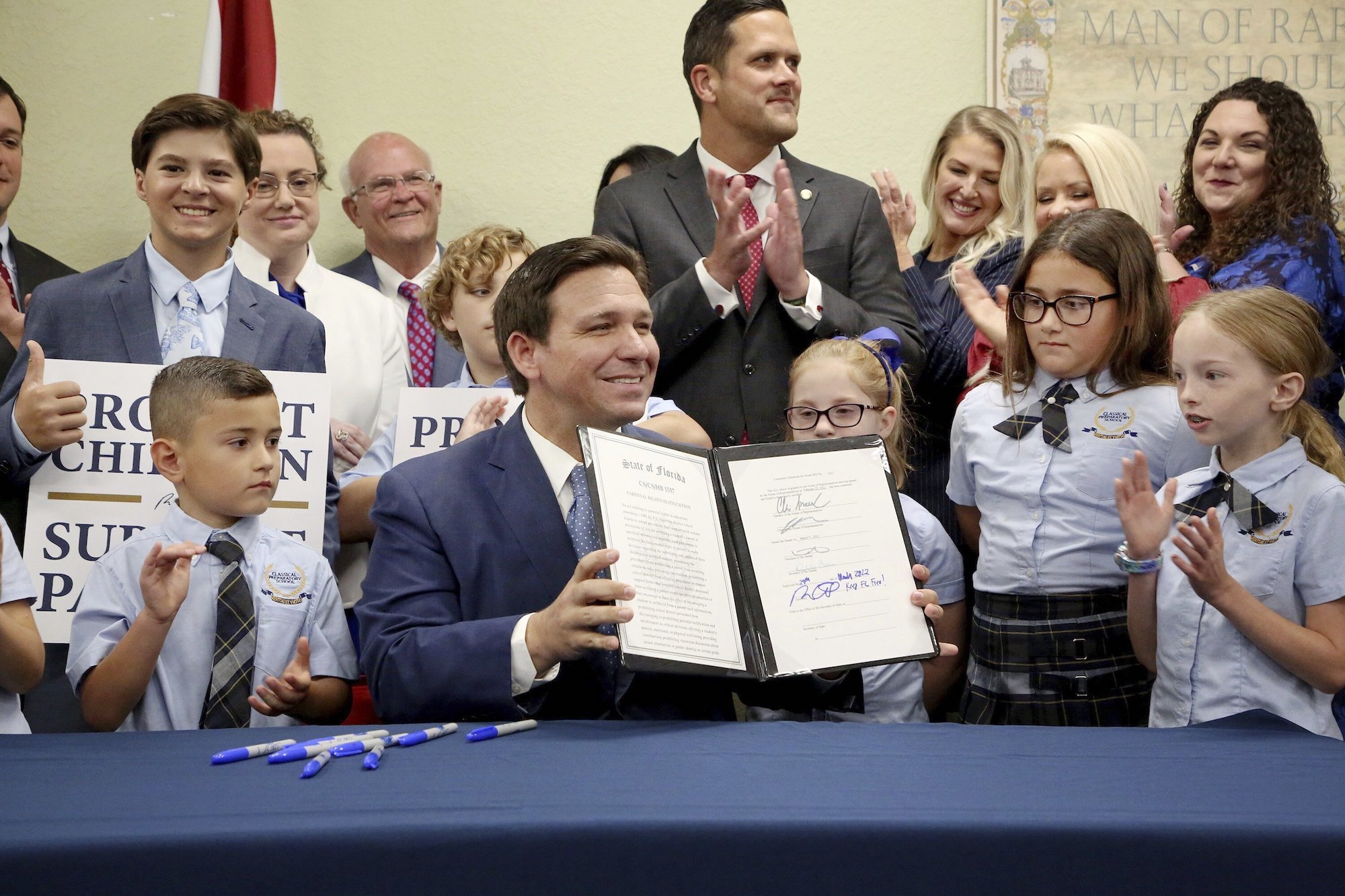 To hear Angela Mann tell it, a paralysis has set in among Florida school counselors and psychologists since Gov. Ron DeSantis signed the so-called “Don’t Say Gay” bill last month. They wonder if sponsoring their schools’ Gay Straight Alliance means they’ll have to break their students’ confidences. They’re confused about whether they can assess suicide risk if a student comes to them in crisis, or if doing so runs afoul of new requirements to ask parental permission first. They’re afraid they’ll be harassed by activists who accuse them of “government indoctrination.” In some instances, that’s already happened. Most of all, they worry the new law will discourage students from seeking help when they need it, says Mann, an associate professor at the University of North Florida and current president of the Florida Association of School Psychologists. “It’s just really scary and sad.”

Florida’s “Parental Rights in Education” bill, the new law’s official name, gained nationwide attention as an effort to ban educators from discussing sexual orientation or gender identity with young students. Receiving less attention is the law’s requirement for schools to notify parents when students receive most mental health services. The legislation will also force the state to rewrite its school counseling standards — likely, in a way that no longer “advocates for and affirms” diversity in sexual orientation and gender.

Florida also quietly dropped out of an annual Centers for Disease Control and Prevention survey that tracks, among other data, adolescents’ mental well-being on Wednesday. On the same day, the state’s department of health issued a memo discouraging gender-affirming care for transitioning children and adolescents, including counseling. All of these changes, Mann says, have “created a dramatic, chilling effect” among her peers, whose job is to provide students academic and emotional support. (That Florida First Lady Casey DeSantis had made children’s mental health a top priority is an irony not lost on her.)

The “Don’t Say Gay” bill has inspired copycat legislation in at least a dozen other states and arrives as other GOP-controlled states enact new LBGTQ restrictions that, in particular, target trans youth. Conservatives have championed these restrictions as a victory for “parents rights,” the banner under which education issues have been weaponized for political gain. Whether singled out for attack or simply collateral damage, school counselors are now in the culture war’s crosshairs, suffering the real-life consequences of being on the receiving end of a political point.

This trend is not particular to Florida. A GOP-controlled school board in Killingly, Connecticut, rejected a proposal last month to establish a mental health clinic at the local high school where a survey found 15 percent of students reported seriously considering a suicide attempt. One community member who opposed it at a school board meeting, the chair of a local right-wing group, called it an “unwarranted government intervention” that “divides the parents and the students.” Four parents in Ludlow, Massachusetts, named a school guidance counselor in their lawsuit against a middle school’s policy that affirms transitioning students’ identities. The American School Counselors Association has been lately flooded with “copy-and-paste” comments from activists demanding counselors stop telling students to be transgendered — something counselors do not do, Sparks emphasizes. “It’s a new iteration of the fear that educators are recruiting students to become LGBTQ,” says Eric Sparks, ASCA’s deputy executive director.

Consider the circumstances a byproduct of the “parents rights” movement, a GOP culture war centered on schools and, consequently, children. It began as backlash against pandemic-informed school closures and mask mandates. After George Floyd’s murder gave way to a nationwide uprising against racial justice, the right trained its sights on “critical race theory,” an academic discipline very rarely taught in K-12 that has become shorthand for lessons that emphasizes diversity, equity, or inclusion. It didn’t take long for right-wing activists to conflate CRT with social and emotional learning (SEL), curricula geared toward helping students develop empathy, manage emotions, and have healthy interpersonal relationships. Christopher Rufo, a senior fellow at the Manhattan Institute who has led the charge on CRT, has likened SEL to a gateway drug to broader discussions about race, gender, and sexuality.

The attack on SEL has gone in a “baffling direction,” Sparks says — one that nevertheless has caught counselors, who often facilitate lessons in the subject area, in its dragnet. No Left Turn in Education, a right-wing parents’ right organization, now lists the ASCA and the National Association of School Psychologists (NASP) among the civil rights groups, teachers unions, and other education organizations “poisoning our children [sic] minds.” NASP says it hasn’t heard many members say they feel personally at risk, but the organization issued guidance to its members last week to help them navigate the vitriolic climate. “We were getting requests from our members in states where these laws are being proposed and passed, looking for guidance and support for what they’re trying to do,” says NASP spokesperson Kathy Cowan.

Mental health services in the school setting have long been a favorite target of the GOP, often fought on the basis that only “traditional subjects,” such as reading and math, have a place in the classroom. When social emotional learning first gained traction in the early 2000s, for example, Republicans sought to rebrand it as a more palatable “character education.” What’s different now is the scale: In addition to the “Don’t Say Gay” clones, states such as Indiana and Oklahoma have introduced bills that would curb SEL education, More than 240 anti-LBGTQ bills have been introduced since January 2022 — a rate of more than three per day, according to data from the American Civil Liberties Union. “It used to be that people didn’t see mental health services and now they think they don’t need them,” says Kathy Cowan, a spokesperson for the National Association of School Psychologists. “Now there’s a very real sense that they’re wrong or dangerous or inappropriate.”

This is unfolding against the backdrop of a crisis in student mental health that worsened over the course of the pandemic. Last fall, the American Academy of Pediatrics, the American Academy of Child and Adolescent Psychiatry and the Children’s Hospital Association declared a national emergency in child and adolescent mental health. U.S. Surgeon General Vivek Murthy followed suit with his own advisory on “the nation’s youth mental health crisis” in December. LBGTQ youth, in particular, suffer higher rates of suicide than their heterosexual and cisgendered peers, a result of the unique stressors of bias and discrimination they face.

Murthy traveled to Florida on Friday to make that point in the wake of the state’s new restrictions. “Many of them are not feeling like they are of value, that they are respected, that they are cared for,” Murthy said. “They are, in fact, feeling threatened by recent rules and legislation that have been passed in various parts of the country.”

How Florida’s school counselors address that threatened feeling in Florida depends, in part, on guidance the state’s Department of Education issues in interpreting the new law. Sparks says the restrictions may run counter to counselors’ ethical standards, but in practical terms,”the law trumps ethical standards.”