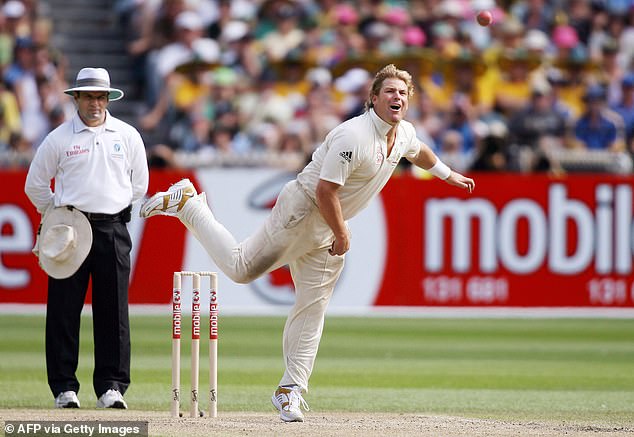 Shane Warne has died suddenly from a heart attack at the age of 52 after collapsing in Thailand.

Tributes from around the cricketing world have poured in after the Australian cricketer turned pundit, considered the greatest leg spinner in history, was found unconscious in a villa in the resort of Ko Samui.

His death comes less than a couple of months after an Amazon documentary on his playing career – which saw him become the first bowler to take 700 Test wickets – as well as his personal life, was released around the world.

And in the documentary – called ‘Shane’ – the former Australia bowler revealed the sort of tough character he was on the cricket field and how he approached bowling to the opposition.

‘Standing at the top of my mark with a ball in my hand and I looked down the pitch, it was my domain. I owned it,’ he said.

‘I wouldn’t have liked to play against me. I was nasty.’

But as well as one of the finest players to have ever played the game, Warne was also seen as an entertainer on the field who would draw the attention of an expectant crowd before stepping up to bowl.

Warne was involved in controversies involving drugs, bookmakers and a complicated personal life during his career, yet few knew how to get spectators around the ground going like him.

‘I was the maverick, the renegade. I was THAT guy. I loved the challenge. I loved something being hard. I wanted to make every single ball an event.

‘I knew I had a conscious effort when I was on the field that I was in charge. Nothing would ever happen until I let go of the ball. I would always try and play at my pace. I liked to create drama out on the field.

‘I loved the game. The more it worked the more I would exaggerate it.

‘I felt that even before I bowled the ball, the opposition were worried about what I was going to do. And I played on that.

‘I loved the gamesmanship, the sportsmanship and the sledging part of it. I probably pushed it a bit too far on a handful of occasions and I paid the penalties for that, but if you asked anyone who played against me, they’d say it was hard work.’

Warne’s most revered moment on the field came in 1993 when he delivered the so-called Ball of the Century at Old Trafford against England’s Mike Gatting.

To many it signalled the revival of leg-spin bowling,  but the mindset of a young Warne was not what many would have expected, although he revealed the tactics which led to the ball that would ‘change my life’ were fairly simple.

‘I remember the night before the Test match I sat in my room and I smoked about, I don’t how many cigarettes I smoked,’ Warne says at the start of the documentary.

‘I was nervous, I’m getting a bit nervous in my hands now just thinking about it.

‘I’m going through their team. Graham Gooch, Mike Atherton, Mike Gatting – geez, these are good players. I didn’t have a great night’s sleep.

‘Suddenly, the thought of actually bowling my first ball in an Ashes series was like ‘wow’.’

He also believed his so-called Ball of the Century to Mike Gatting was a ‘fluke’, as he never did it again when bowling

‘My thought process was to bowl the ball and spin the ball as far as you possibly can and send a message to the England guys that this guy can spin it,’ Warne adds.

‘Let them see it drift, curve and just rip it. I’m nervous and there’s suddenly a hush that goes around the ground.

‘I take a step, I bowl and I let go of the ball and it’s all like it happened in slow motion.

‘Gatting tried to turn it. It drifted and he followed the drift. It pitched, just missed his bat and just clipped the top of off stump.

‘First ball in an Ashes series and it felt pretty bloody good.’ Not that he believed it was all down to his skill with ball in hand.

‘It was a fluke, because I never ever did it again. But from that moment things changed.  That ball changed my life.’

Warne also admits that his successful career took a heavy toll on his family, but that he did not have any regrets as to how his career went.  But he also reveals he did not expect to represent Australia in the sport, given his like of Australia rules football.

‘I had to be selfish at times, and most of the times I was,’ says Shane. ‘Cricket was my No 1 priority. That doesn’t mean I did not value my family, but they were second. I can’t shy away from that.

‘I liked loud music, I smoked, I drank, and I bowled a bit of leg spin. I don’t have any regrets.

‘I never really wanted to play cricket. I loved it but I never thought I was good enough to play for Australia.

‘I am AFL through and through. I just wasn’t good enough, and that was a tough lesson to learn that your dream was shattered.

‘Luckily I had a natural ability to the spin the ball a long way. Cricket found me. I realised this is what I want to do.’

Other world-renowned cricketers also celebrate the achievements of Warne’s career in the documentary.

India great Sachin Tendulkar says: ‘You want to be there inside the stadium when he’s bowling. There was always going to be something that was going to happen between a batter and Shane.’

Meanwhile, former England all-rounder Sir Ian Botham adds: ‘He revolutionised the whole concept of Test cricket.  He was box office. He took the game by the scruff of the neck.’

Another ex-England captain, Sir Andrew Strauss meanwhile says: ‘All the eyes turned to him when he was bowling. Everything was theatre.

‘You faced him for a session and you were utterly exhausted.’

Warne was particularly good friends with ex-England skipper Kevin Pietersen too due to their time together at Hampshire.

And the former England batsman says in the documentary: ‘ He is someone you want to hang around with.

‘He has that infectious personality, he makes you smile, he makes you laugh. He’s got up to some good stuff and some stuff the media love. That’s the nature of who he is.’

But Warne also touched those in the music world, with Ed Sheeran adding: ‘ Shane reminds all blokes a bit of themselves, he has got the Jack the lad don’t give a f*** attitude.

‘[He was] one of the few rock and roll sportsmen. People really liked that about him. He was an everyday bloke who happened to be amazing at bowling.

‘Kind of like the stories you would hear about footballers in the 60s, who would have a pint and cigarette at half-time and then go back on.’