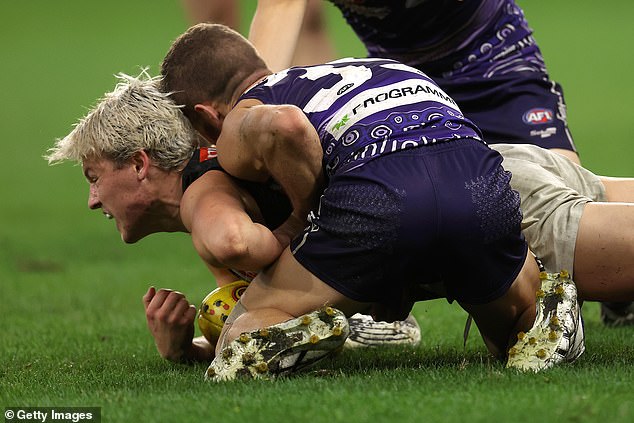 Fremantle player Sam Switkowski has been sent straight to the AFL tribunal for an illegal ‘chicken wing’ tackle on cheeky young Collingwood star Jack Ginnivan during the Magpies’ 36-point win on Sunday afternoon.

Footage of the tackle shows Switkowski pinning Ginnivan’s arm, before further twisting it behind his back, placing the young star at risk of a potentially very serious injury.

Fortunately for the Magpies’ rising star he was unhurt in the incident – which also went completely unnoticed by umpires during the game.

AFL House took a dim view of the illegal tackle, though, deeming the offence ‘serious misconduct’, with Switkowski unable to enter an early plea and in hot water for the second yanking motion which pulls Ginnivan’s arm further and further behind his back.

This isn’t the first time Ginnivan, a cheeky 19-year-old forward full of flair who has impressed in his first AFL season, has been targeted by the opposition.

Richmond player Rhyan Mansell received a one-match ban for slamming his forearm into the back of Ginnivan’s head while he was pinned on the ground, an action which sparked a melee, but couldn’t be awarded as a free kick as it happened after the siren.

Ginnivan has been in fine form for Collingwood this season, kicking 19 goals from his eight games

At the time, Collingwood coach Craig Macrae said he expected his young star to cop more and more attention from defenders throughout the league given his form in front of goal and the cheeky way he plays.

In fact, the illegal tackle came just moments after Ginnivan put the result beyond doubt for his side, giving it to the Dockers fans before strolling in to an open goal to kick the sealer.

After being pick 13 in the 2020 Rookie Draft, the Bendigo junior has taken his play to a new level this season, kicking 19 goals from his eight games and receiving the ANZAC Day Medal for best-on-ground against Essendon in Round 6.

Cameron Smith escaped suspension for this ‘chicken wing’ in 2018.

‘Chicken wing’ tackles have caused controversy in both the AFL and NRL in recent years, with Carlton legend Chris Judd and Melbourne Storm great Cameron Smith both facing an outcry from fans in the past for the illegal, dirty motion that attacks a defenceless opposition player.

Smith was criticised for his tackle on Sharks winger Sosaia Feki in 2018, where he both twists his opponent’s arm, then bends it to pull it down. Smith escaped punishment for the tackle, which fans saw as preferential treatment.

Chris Judd was rubbed out for four games after hurting Kangaroos player Leigh Adams with a ‘chicken wing’ 10 years ago.

Judd wasn’t so lucky in 2012, with the Norm Smith and Brownlow Medal winner copping a four-week ban for his ‘chicken wing’ on Kangaroos player Leigh Adams, who dislocated his shoulder in the incident.

Switkowski will face the AFL Tribunal later this week, where a decision will be made on how long he could potentially be banned for, despite Ginnivan being unhurt in the incident.