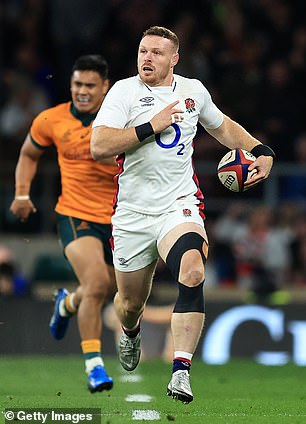 By Nik Simon for MailOnline

No 8 Sam Simmonds will make his first England start for four years in Saturday’s Six Nations opener against Scotland.

Simmonds has been selected ahead of rival Alex Dombrandt, in a new-look back-row featuring Lewis Ludlam and stand-in skipper Tom Curry.

Injuries have forced Eddie Jones to name an unfamiliar looking team for the Calcutta Cup, with lock Nick Isiekwe also making his first Test start since 2018, alongside Maro Itoje.

The front-row has a more familiar feel, with Ellis Genge selected ahead of Joe Marler, partnering Luke Cowan-Dickie and Kyle Sinckler.

‘As the first game, this match is hugely important to both sides and we will both want to get off to a winning start,’ said Jones

‘We have a good, young team but we understand the task ahead and we’ll be ready to go after it from the first kick.

‘Tom Curry will captain the side for this game and has the respect of the team around him, in Owen and Courtney’s absence. He also has the support of the vice captains and other leaders in the team such as Maro Itoje and Ben Youngs.

‘We have prepared really well for this game. We’ve had a number of obstacles thrown at us, but we’ve overcome them as a more together group and we’re looking forward to getting started.’

As revealed by Sportsmail, Elliot Daly will start in the centres alongside Henry Slade.

Ben Youngs and Marcus Smith will maintain their half-back combination from the autumn, with George Ford providing cover from the bench.

And Joe Marchant has returned a negative Covid test to start on the wing, alongside Max Malins and Freddie Steward.