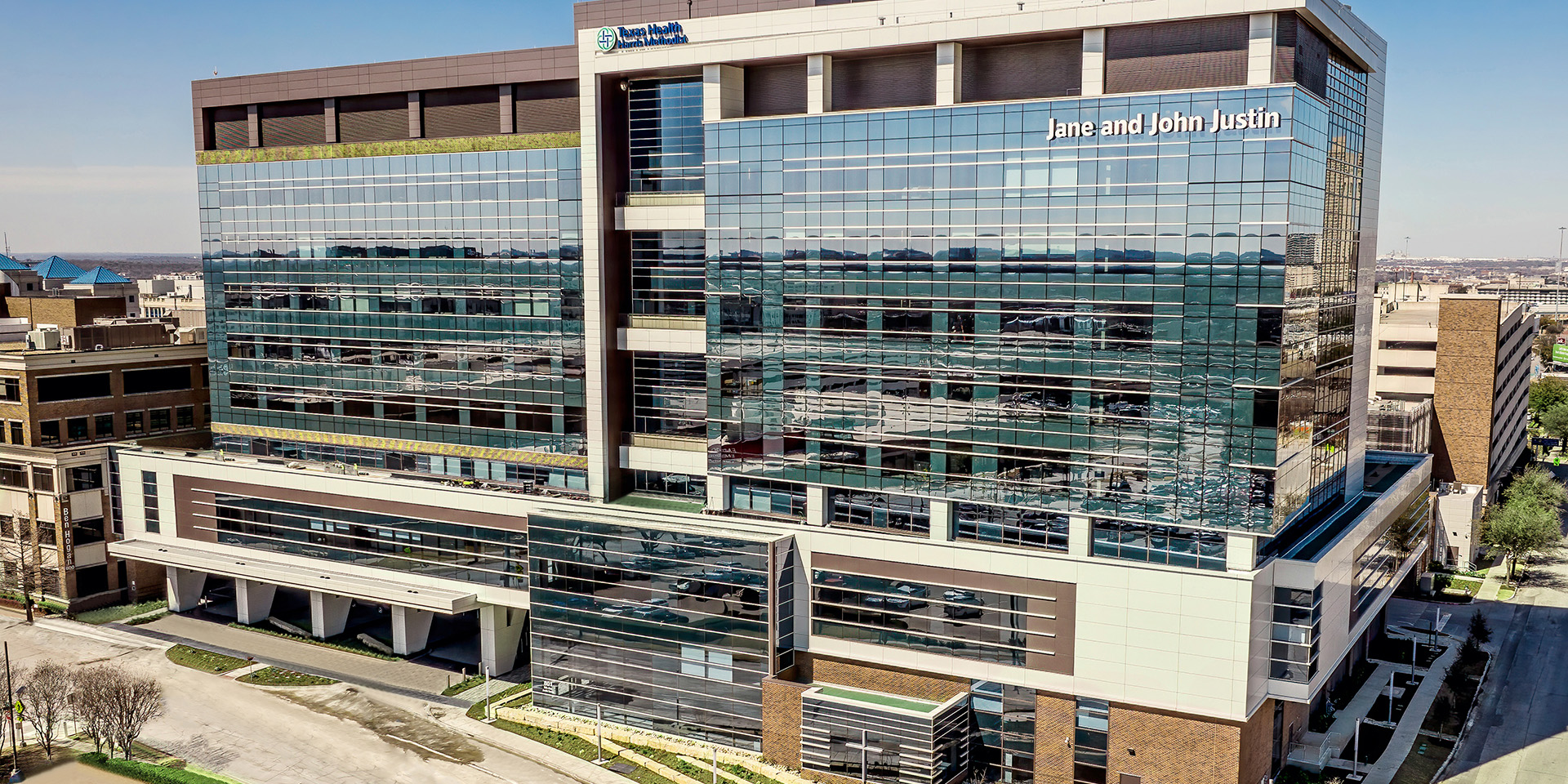 If you didn’t know that Texas Health Harris Methodist Hospital Fort Worth’s Justin Tower was full of hospital suites, operating rooms, and nurse stations, you might think you were walking into an Omni Hotel.

The valet circle drive, upscale western decor, intricate light fixtures, floor-to-ceiling windows, and art installations illuminated with natural light are not exactly what one expects when they arrive at the hospital. I had the chance to tour the new $300 million Jane & John Justin Patient Surgical Tower with hospital CEO Joseph DeLeon to get a firsthand look at the changing nature of hospital design.

The building is the largest construction project in the history of the Texas Health system. The 440,000 square foot, nine-story tower is set to go live with patients in early April and will add 144 patient beds, 15 surgical suites, and a plethora of pre- and post-operative service areas. Before we took the elevator to see the patient and operating rooms, I was struck by the topographical art installation reflecting the Trinity River’s path through Fort Worth, the large video board depicting Texas images (the tower is named for the Justin family of Justin Boots fame), and low tabletops that look like massive tree stumps. The hospital employed 15 local artists to decorate the facility.

The building is tied into the rest of the hospital and allows for separate drop-off and pick-up areas protected from the elements so that patients with emergent and scheduled surgeries can easily access the services. Despite being a significant addition, the hospital is poised to grow. Right now, floors four and five are shelled for expansion, and the hospital is built so that four additional floors can be built on top.

“Fort Worth, like the rest of North Texas, is one of the fastest-growing large cities in the country, and the added surgical capacity allows us to care for more patients and a variety of procedures,” DeLeon says. “Surgical capabilities are central to the transformation of acute care provided in hospitals. Given the increasing complexity of patient conditions and the high-volume growth the Justin Tower will enable us to accommodate both the growth in volume and enable us to provide a solid training platform for future surgeons in our graduate medical education programs.”

As we traveled to the top floor to take in the patient rooms and suites, I was again struck by what felt like a luxury hotel. With an on-stage/off-stage layout that shields patients from the inner workings of the hospital floor, the patient rooms line the outside of the building, offering views with large windows that flood the room with natural light. The patient suites are complete with a larger-than-average patient room, an additional room with a couch bed and television, and a sizable bathroom with marble and high-end fixtures that one might find in luxury penthouse. The patient rooms are built to be universal, meaning that the room is suited for increased acuity.

Because the tower was built during the pandemic, specific changes had to be made to the plan as the nature of healthcare changed as well. An entire floor of the new tower was built with an independent ventilation system to keep airborne viruses away from other patients.

“We utilized learnings from a global pandemic to equip the new building to serve the community in any future health crises,” DeLeon says. “It was easier to make changes in the middle than post-completion. The changes we made include the ability to make the patient rooms and the entire eighth floor an isolation ward, which is an added level of protection for any airborne illnesses.”

The floors are equipped with private consultation rooms, teaching space for residents that will train at the facility, and family waiting areas. The tower reflects the system’s expanding graduate medical education offerings and the growing North Texas market. The room designs were built with physician input and years of testing in the old facility before being installed into the tower.

The 62 private patient rooms in the operating area are a significant shift from what used to be beds divided by hanging curtains, and they complement the 15 new operating rooms. The ORs are 1,000 square feet, which is big enough to accommodate surgery robots and all the caregivers necessary to complete complicated surgeries. The rooms include stainless steel walls that are easy to clean and sterilize, UV lights to kill viruses, and integrated imaging displays.

The lux accommodations will certainly be a step up for patients and staff, but luxurious flourishes like those seen in Justin Tower are sure to make the facility more expensive. According to the Center for American Progress, hospitals receive one of every three dollars spent on healthcare in the United States. The country spends more than $1 trillion on hospital care alone each year. Hospitals boast a margin of 8 percent, larger than those in the pharmacy or insurance industry. Despite worse results, healthcare spending in the United States outpaces all other developed nations.

DeLeon says the organization’s focus was on building for the future and making patients comfortable. “We designed and built a hospital for the future, with more than 99 percent of the cost going into advanced patient care, like advanced ORs, patient rooms that can care for multiple acuity levels, and an entire floor that can turn into an isolation floor if needed,” he says. “The remaining portion of our budget went to creating an environment that aids in recovery. That includes medical-grade furniture and art that celebrates Fort Worth’s heritage. Texas Health is proud to have designed a beautiful place to serve our community.”