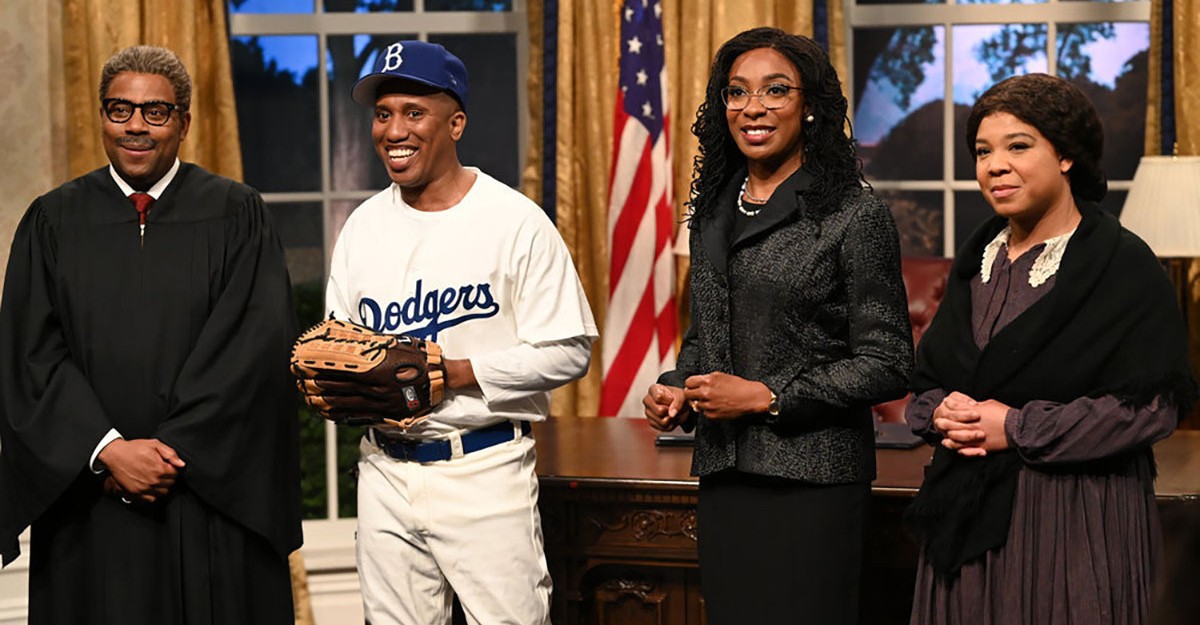 Last night’s cold open on Saturday Night Live, which featured four of the show’s Black cast members, illustrated how far the show has come in the past decade. SNL has struggled with diversity throughout its tenure, but during the 2013–2014 season, the problem reached a fever pitch. The show had not hired another Black woman after Maya Rudolph’s departure in 2007, leaning instead on Kenan Thompson and Jay Pharoah to dress in drag when necessary.

But by 2013, Thompson publicly refused to play along, and the issue grew noticeably strained when Kerry Washington hosted in early November. Appearing in the cold open as both Michelle Obama and Oprah, she ran offstage to change costumes mid-sketch while a voice-over preempted the inevitable criticism. “We agree this is not an ideal situation and look forward to rectifying it in the near future … unless, of course, we fall in love with another white guy first,” it informed viewers.

Read: 2014: The year TV starts atoning for its lack of diversity?

SNL continued to fall in love with white guys after that, but it also added Sasheer Zamata in early 2014, as well as Leslie Jones and Michael Che the following season. Since then, progress has been slow, though persistent. The show currently has five Black comedians in a cast of 21, and last night delivered a meaningful cold open that reinforced what representation could look like at the level of a single sketch—rich and abundant.

The show began with Joe Biden (James Austin Johnson) and Ketanji Brown Jackson (Ego Nwodim) celebrating her appointment to the Supreme Court. Rather than linger on their exchange, however, the sketch underscored the historic moment with a poignant one of its own. Nwodim’s Jackson conjured heroic figures for advice. Kate McKinnon briefly resurrected her rowdy Ruth Bader Ginsburg impersonation, but the sketch deepened once she exited.

Justice Thurgood Marshall (Thompson), Harriet Tubman (Punkie Johnson), and Jackie Robinson (Chris Redd) all appeared to offer Jackson their perspective on being “the first.” The writers used the chasm between “then” and “now” to joke about progress—or the lack thereof. “[Democracy] stumbles, but over time, it moves forward,” Thompson as Marshall said encouragingly. “I mean, I was the first Black Supreme Court justice, so you must be, what, the tenth, the 20th?” Nwodim retorted, “Nope, just the third.” Throughout the sketch, there was a sense of fellowship among the Black cast members that could remind viewers of Senator Cory Booker’s emotional speech during Jackson’s confirmation hearings—the joy of witnessing history after centuries of shared struggle.

Read: Cory Booker reflects on his speech in support of Ketanji Brown Jackson

The big payoff came when Nwodim, Thompson, Redd, and Johnson all gathered to say that famed line, “Live from New York, it’s Saturday night,” infusing the normally satirical opening with noted emotion. Often, most cast members in the cold open leap back into frame to participate in the ritual, but both Johnson and McKinnon stayed offstage, leaving the Black cast members to inhabit the space.

Granted, it wasn’t the first time an all-Black cast delivered the show’s introduction. In 2014, Maya Rudolph made a cameo, joining Thompson, Pharoah, and Zamata to explain the elevator altercation between Jay-Z and Solange. Still, last night’s subject matter magnified the significance.

Elsewhere, the host, Jake Gyllenhaal, brought a surprisingly playful spirit to the episode. Returning to the gig after 15 years, he said method acting had warped his perspective on the craft. “I kind of forgot how to have fun,” he explained. “Acting is a really stupid job. It’s pretend and it’s fun and it should be filled with joy. I’m finally embracing that joy again, and that’s why I’m back standing on this stage.”

Gyllenhaal seemed to welcome whatever SNL wanted to throw his way, including playing a flower that gets peed on by a dog, an actor performing the role of the transparently ill Doc Holliday, and several music-heavy sketches that required him to sing.

Yet it was the sketch in which he played the straight guy that turned out to be the most memorable of all. In “Dream Home Cousins,” Gyllenhaal played one half of a family team tasked with planning and building a home for a newlywed couple, Lillian (Heidi Gardner) and Pat (Johnson), as well as Pat’s mother, Bea (McKinnon), and her 27-year-old cat, Charles-David. The sketch quickly became an opportunity to let McKinnon shine as the cantankerous interjector whose forceful opinions shifted the home design into an absurdist nightmare. McKinnon is one of the show’s best character actors, able to exploit a quirk into an entire backstory, and she gamely built a whole world for the mother-in-law from hell out of asides.

The episode felt light and celebratory. Gyllenhaal was looking forward and SNL seemed to be too. The night that started by appreciating the long-overdue appointment of the first Black woman justice continued with a slate of sketches filled with spark and joy—and diversity. Even though SNL—and America—still have far to go, last night’s episode was a welcome opportunity to revel in the progress that has been made.