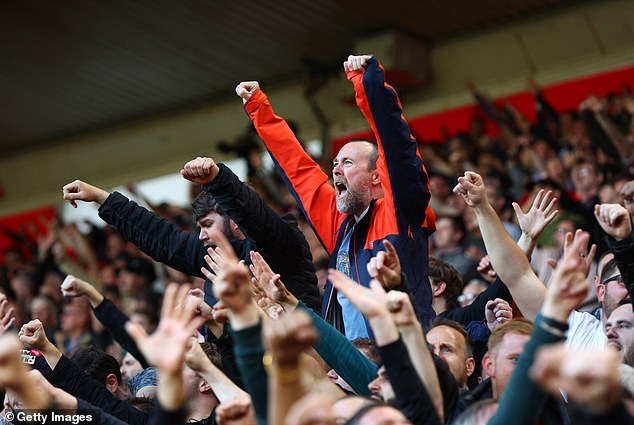 Southampton fans have taunted visiting Liverpool supporters by singing the National Anthem during their Premier League clash at St Mary’s – just 24 hours after ‘God Save the Queen‘ was at the centre of a row between the Government and Jurgen Klopp.

A section of fans in the Southampton end were heard airing the anthem midway through the first half, before Liverpool’s away end responded with a chant of ‘f*** the Tories‘.

The Sex Pistols’ version of God Save the Queen was played on the public announcement system at half-time in a mischievous move from the Saints DJ.

It comes after Downing Street slapped down Liverpool manager Klopp’s defence of fans who jeered the National Anthem and Prince William at the FA Cup final on Saturday.

Reds fans sparked fury after boos echoed around Wembley Stadium while Prince William – the president of the FA – was introduced to Chelsea and Liverpool players ahead of their cup final clash on Saturday.

Supporters also drowned out singer-songwriter RAYE’s rendition of ‘God Save The Queen’, as well as the hymn ‘Abide With Me’ – a much-loved FA Cup final tradition.

But Klopp, speaking in a pre-match press conference on Monday, backed supporters who had jeered the anthem.

‘They wouldn’t do if there was no reason,’ the Liverpool boss said.

Minutes after his comments, Prime Minister Boris Johnson’s official spokesperson replied with ‘no’ when asked whether Klopp was right to say Liverpool had a reason to boo the national anthem.

The tradition of booing the National Anthem is not new for Liverpool fans and is thought to date back to the 1980s when the fans protested Thatcher’s Conservative Government and what they perceived as a ‘managed decline’ of the city.

Reds fans’ disdain for the establishment was also a result of the cover-ups that occurred in the Hillsborough disaster where 97 people were tragically killed in a crush at the stadium in Sheffield during an FA Cup semi-final match in 1989.

Klopp called the club’s supporters ‘wonderful’ when asked about the jeering of the anthem.

He said on Monday: ‘Of course I have thoughts but I think in these situations it’s best to ask the question: why does it happen?

‘They wouldn’t do if there was no reason. I’ve not been here long enough to understand the reason for it – it’s for sure something historical – and that’s probably questions you can answer much better than I could ever.

‘The majority of our supporters are wonderful people. Really smart, go through lows and highs. They wouldn’t do it without reason.’

There were also reports of supporters booing the National Anthem earlier this year, when Liverpool played Chelsea in the Carabao Cup final, also held at Wembley.

The outburst by thousands of fans at the weekend was denounced across the political spectrum.

What have people said about the Wembley boos?

‘The FA Cup final should be an occasion when we come together as a country. It should not be ruined by a minority of fans’ totally shameful behaviour. In this year of all years – the Queen’s Platinum Jubilee – this is dreadful.’

Tory MP and former Culture Secretary Karen Bradley said: ‘It is utterly unacceptable and disgraceful that fans booed Prince William. I would urge the FA to take all necessary action and pursue those responsible.’

Sir Ed Davey, leader of the Liberal Democrats said: ‘We have the most wonderful Monarch and those fans who booed do not represent their clubs or our country.’

Former BBC Royal Correspondent Michael Cole described the booing as ‘disgraceful and deplorable’ and called for the Football Association to take action.

Sally Bedell Smith, who has written a bestselling biography of the Queen, criticised the booing as ‘really inappropriate’ and said that William would have found the outburst ‘very dismaying’.

However, Connor O’Neill, football writer for the Liverpool Echo, said Liverpool fans ‘are well known’ for booing God Save The Queen at Wembley and claimed that the reasons date from the city’s antipathy towards Margaret Thatcher’s Tory government in the 1980s.

He said: ‘The Conservative Government’s “managed decline” of the city was then followed by the failings of the Government following the Hillsborough disaster, which further entrenched those feelings.’

Left-wing trade unionist Howard Beckett, who last year stood to become general secretary of the Unite union before pulling out, praised Liverpool fans for ‘rejecting blind patriotism and the establishment’, adding the outburst was ‘pure quality from socialist fans’.