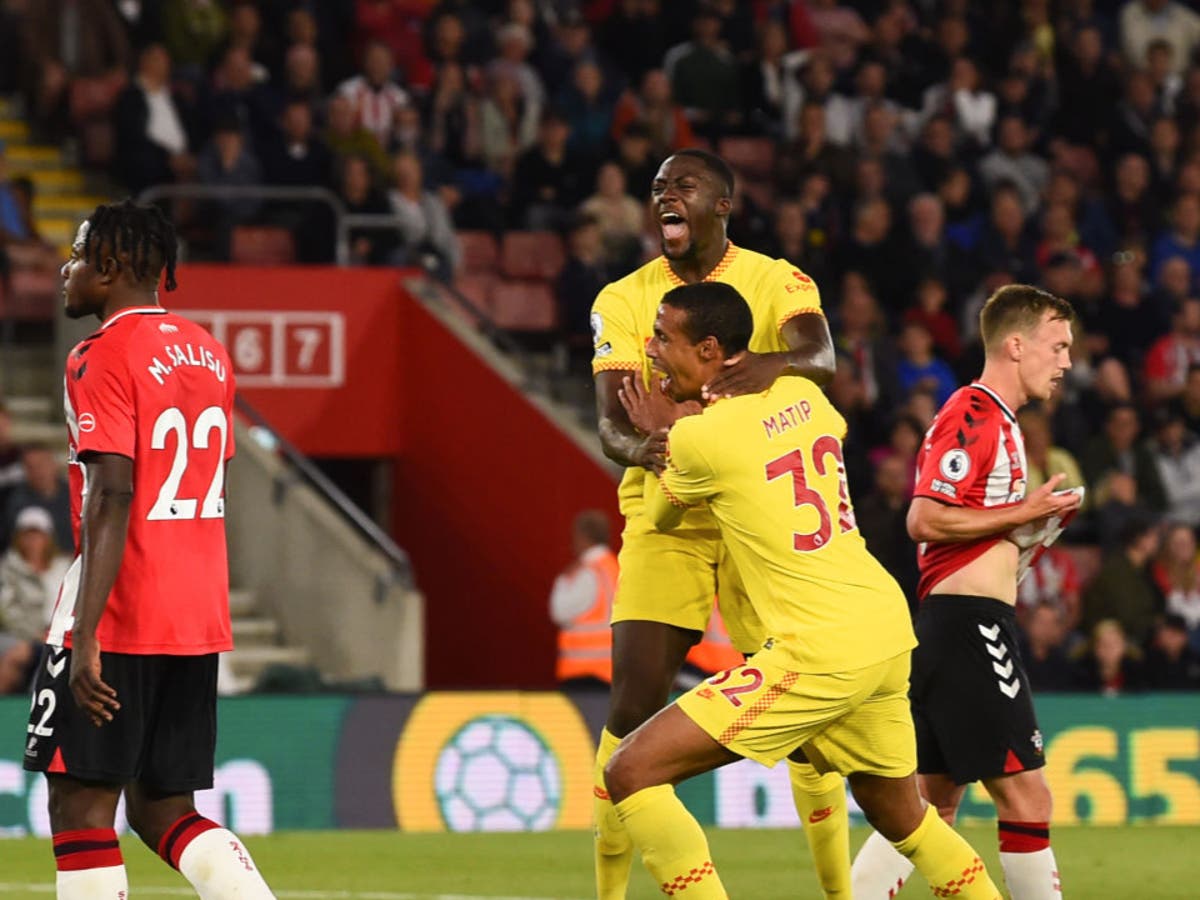 Follow all the action as Southampton host Liverpool in the Premier League this evening.

Jurgen Klopp’s side head into tonight’s fixture four points adrift at the top, having played one game less, and know a surprise defeat would see Pep Guardiola’s side crowned champions. Liverpool will have to make do without Virgil van Dijk and Mohamed Salah, who both picked up knocks during the club’s FA Cup final win over Chelsea last weekend. Klopp has suggested he could make several more changes to his starting line-up due to the short turnaround as the Champions League final against Real Madrid looms at the end of the month.

Southampton have avoided the threat of relegation despite a somewhat disappointing campaign. Ralph Hasenhuttl’s side sit 15th in the table but have taken just one point from their last four league fixtures, with a 3-0 defeat against Brentford last weekend compounding their recent woes. Can they produce a seismic upset to decide the season with a game to spare, though?

The quadruple dream is still alive for Liverpool.

90+3 mins: Southampton send men forward and swing crosses into the box that Liverpool head clear. There’s a few nervous faces in the crowd but the full-time whistle goes and Liverpool claim the points.

The title race will go down to the last day. Liverpool fought back from a goal down to claim all three points thanks to goals from Takumi Minamino and Joel Matip.

90 mins: Three minutes of added time to play at St. Mary’s. James Milner gets clipped and goes down deep in his own half. He stays down and ekes a few seconds out of the game before Alisson restarts the game by booting the free kick up the pitch.

87 mins: Elyounoussi gives the ball away to Milner who pokes it forward to Keita to clear the Liverpool lines. Anywhere up the pitch is good for the Reds who are closing in on a well earned victory.

84 mins: Close! Liverpool win a corner that Tsimikas curls into the box. He picks out Konate who wins the header but fires his effort over the crossbar. That would have sealed the deal for Liverpool.

80 mins: Takumi Minamino slides the ball over to James Milner who scuffs his attempted cross straight out of play. Roberto Firmino’s night is over as Jurgen Klopp brings Naby Keita on to replace him.

76 mins: Liverpool are getting the job done here. As it stands they’ll move to within a point of Manchester City and take the title race into the final day.

It’s still a mammoth task. No team leading the Premier League on the final day has gone on to lose the title. The last time that happened in the top-flight came in 1989 when it was Liverpool themselves who lost the title.

73 mins: Nathan Tella goes in the book too before getting subbed off for Southampton. Stuart Armstrong and Oriol Romeu come on for Tella and Ibrahima Diallo.

70 mins: Jack Stephens goes in the book for a clumsy tackle on Divock Origi which goes down well with the travelling Liverpool fans who start chanting the forwards name.

67 mins: Joel Matip! What a strange goal this is. Kostas Tsimikas curls a corner kick into the box and Mohamed Elyounoussi flicks it into the middle. Kyle Walker-Peters and Joel Matip both lunge for the ball, Matip seems to get the last headed touch and it loops into the top corner over Alex McCarthy’s outstretched hand!