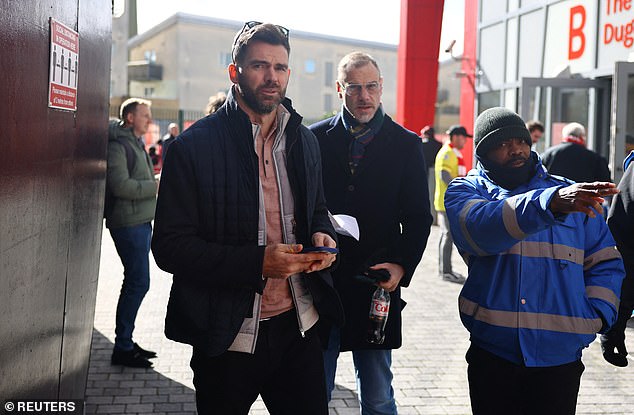 While his team-mates were toiling in the field in Barbados last Friday, arguably the greatest bowler this country has produced was taking in the Cheltenham Gold Cup.

At least Jimmy Anderson, whose ridiculous non-selection made less sense with every passing over, was well looked after.

England’s record wicket-taker was a guest of the Jockey Club in their plush Club Room.

On the subject of strange moves from the ECB, what of the decision to sound out Sir Dave Brailsford over a role in the review team charged with reshaping English cricket? At a time when the Government are all over Chelsea and ethics in sport, this was the man in charge of Team Sky, who a 2018 select committee accused of having ‘crossed an ethical line’ in pursuit of success.

It would appear Andrew Strauss, tasked with carrying out the audit, has a short memory.

Aside from owning Brighton, Tony Bloom is renowned for two passions — horseracing and high stakes gambling.

On Wednesday one of his horses, the Willie Mullins-trained Energumene, won the Queen Mother Champion Chase at Cheltenham.

Bloom was there to see the victory and even wore a Brighton manager’s coat to collect the trophy.

Perhaps just a coincidence, then, that bookmakers Star Sports took a £150,000 bet on the horse to win at odds of 100-30 two hours before the race, via a call to one of their offices… in Hove.

Judy Murray was among the record numbers who headed to Gloucestershire for the Cheltenham Festival.

She believes that tennis star sons Andy and Jamie — who have previously attended jump racing’s showpiece as fans — may well be back in the future as horse owners.

Leeds stars get a welcome break

Earlier this month, Sports Agenda reported how new Leeds manager Jesse Marsch had been given an ovation from his players following a rousing first speech at the club’s Thorp Arch training ground. On Friday night, they were at it again.

After the 3-2 comeback victory at Wolves, which went a long way towards securing Leeds’ Premier League safety, the American told the players they were not needed back at training until Wednesday.

Given it is the first time in three and a half years that such time off has been granted, thanks to the relentless demands of previous manager Marcelo Bielsa, it is hardly surprising that the delighted cheers were heard right down the Molineux corridors.

More than 280,000 spectators flocked to the course, with new highs set on each of the four days. Wednesday’s downpour took place with 64,000 present and there were no issues with places to shelter.

More than 280,000 spectators flocked to the Cheltenham Festival over four days this year

The view is that the venue can look after 72,000 in the event of inclement weather, and whether there should be a repeat of the crowds of 73,000-plus on Thursday and Friday will be among the discussion topics.

Experts are not super

Remember iNHouse Communications? They were the media firm brought in to oversee strategy for the doomed European Super League project, which resulted in nothing but contempt from fans.

The company, led by former Downing Street adviser Katie Perrior, took a table at the Premier League-sponsored Ultimate News Quiz, for the charity Action for Children, at the Grand Connaught Rooms last week.

Despite boasting of bringing together ‘experts with the right knowledge, experience and skillset’ there was much chortling when they finished 24th out of 38 teams.

Questions are being asked at Sky Sports News after its Twitter account — with 10 million followers — unfollowed all the network’s journalists.

One insider remarked: ‘If Sky Sports News itself isn’t interested in the reporting team’s journalism, why should any customers be?’

An audit of the account followed the recent reorganisation, with the channel now only following other verified Sky accounts.

The concerning situation at Derby County rumbles on, with the administrators issuing yet another statement last week that answered few questions.

In their latest missive, Quantuma said they were continuing to work with bidders, prospective purchasers and stakeholders, adding that they had ‘provided an update to the EFL this week’.

That is thought to be a stretch. The EFL’s position remains what it has been for months: they are keen to get on with the preferred bidder as soon as possible and frustration is mounting as the clock ticks.

The FA will combine the roles of marketing and communications, after comms chief Louisa Fyans departs following the Qatar World Cup.

Hopefully the new appointee will not suffer the same fate as the last holder of the joint role.

In 2011, with the FA in crisis, embattled former Sky executive Julian Eccles left after less than one chaotic year in the job.

England’s players are likely to be given a presentation on human rights issues surrounding the World Cup at St George’s Park on Tuesday.

The FA hope the meeting will provide Gareth Southgate and his squad with enough information to make a decision on what — if any — action to take while in Qatar.

Russia’s invasion of Ukraine, which prompted FIFA to say that foreign players in both countries were free to break their contracts, is already having an impact on the transfer window.

A number of admired players from Brazil, along with a wealth of young talent from across the globe, ply their trade at Shakhtar Donetsk, the Moscow clubs and Zenit St Petersburg.

Expect top-flight clubs to begin their summer shopping there.

ENGLANDFANSFC, the group often overlooked by the FA, are hosting a team made up of Ukraine supporters on Friday at Bedfont & Feltham Football Club in Middlesex.

While admission is free, donations are sought and will be spent on humanitarian aid, which will be sent to the Poland-Ukraine border to help those in need.