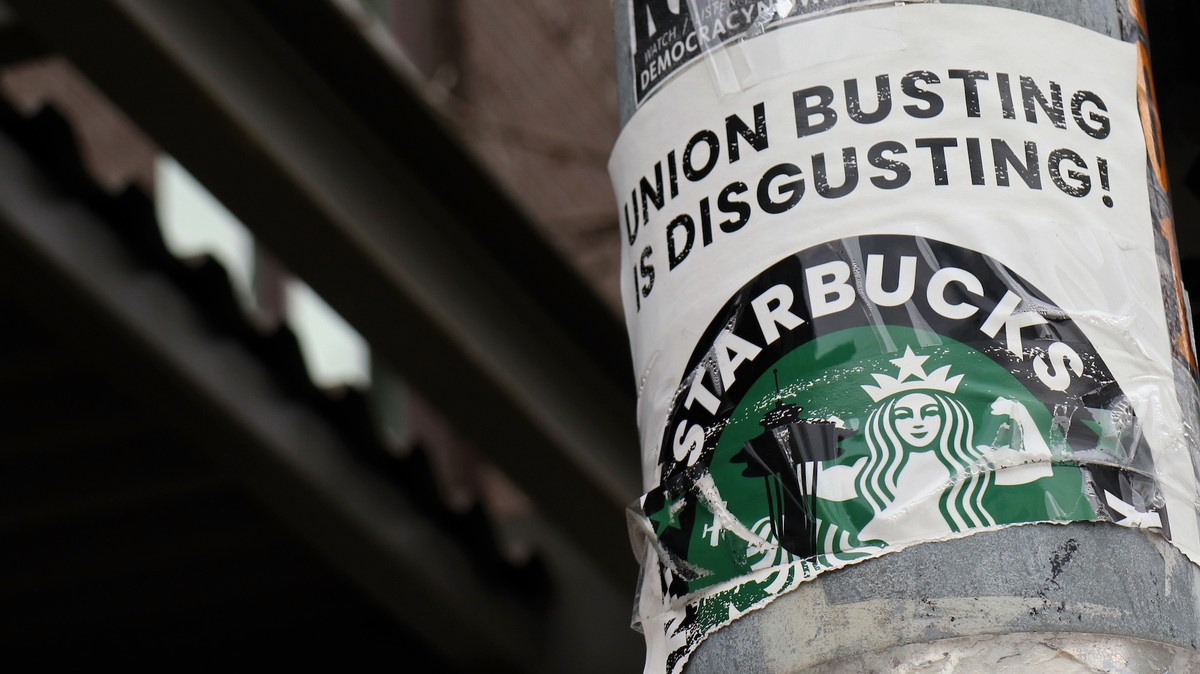 A pro-union poster is seen on a lamp pole outside a Starbucks location in Seattle’s Seattle. (Photo: Toby Scott/SOPA Images/LightRocket via Getty Images)

Starbucks fired a barista and organizing committee member at a store in Raleigh, North Carolina on Saturday after blaming her for purposefully breaking a sink—just days before employees at the store begin voting on whether to unionize.

Sharon Gilman, 20, a student at nearby North Carolina State University, had worked at Starbucks since May 2020, and also trained other baristas at the store. Gilman told VICE News Sunday that she didn’t purposefully break the three-compartment sink while she was washing dishes, and that she believes she was fired for being a pro-union employee who’d spoken to the press.

“My name was on the letter, my name was on the press release when we went public,” Gilman told VICE News. “I think this is Starbucks’ way of making a statement of what could potentially happen if we were to vote yes for the union.”

The Raleigh store is one of more than 200 which have filed for a National Labor Relations Board Election since the first store in Buffalo voted to unionize in December, according to a tracker compiled by labor outlet More Perfect Union. Workers at 15 of 16 stores where results have been counted since have voted for a union, including six in New York last week.

Workers at the Raleigh store will begin their vote on union representation later this week.

Do you have a tip to share with us? Please get in touch with the reporter Paul Blest via email paul.blest@vice.com.

The incident in question happened on February 13, just one day before Gilman and six other coworkers published an open letter to then-Starbucks CEO Kevin Johnson stating their intent to form a union at the Starbucks store. That night, Gilman was washing dishes in the back of the house and was cleaning the floor drain using the spray head of the sink when the spray head snapped.

“The sink just kind of fell off the wall onto me,” Gilman said. “I wasn’t injured, but it did fall off and I was holding it up and there was water spraying.”

“I heard her scream when it happened and could see how scared she was when the sink collapsed on her,” Elsa Englebrecht, another Starbucks worker and leader in the union campaign, said in a statement provided Sunday by the union.

Gilman said she and her coworkers took photos and video of the broken sink, which was later fixed. But more than a month later, on March 26, Gilman arrived at work to find her district manager wanting to talk to her, which she assumed was about the union.

The district manager instead told her she needed to write a statement about the sink, said a repairman had determined the sink couldn’t have been broken by accident, and that the store had video of when the sink broke. In an email, Starbucks spokesperson Reggie Borges told VICE News that “video footage confirmed [Gilman] forcefully pulled on the hose until it snapped.”

On Saturday, two weeks after she found out she was under investigation, Gilman was fired.

Gilman told VICE News that she didn’t break the sink on purpose. “Nothing memorable happened [that night]. I was not frustrated. I was not angry,” Gilman recalled of that night. She also said that she doesn’t believe she has the physical strength to break the sink in the manner she was accused of doing.

“I was in disbelief. I don’t work out. I’m not a freaking macho man,” Gilman told VICE News. “As a 20-year-old female, I didn’t know that I had the strength to pull to break a metal sink clear off the wall.”

Gilman did not admit to wrongdoing in the statement she wrote to her manager about the sink, but said that she couldn’t argue with the company’s interpretation of the video. Both the company and Gilman also confirmed that she originally said she was cleaning the back of the sink and then later said she was cleaning the floor drain; Gilman said she initially didn’t remember everything about the situation at the time she was asked.

“I’ve never been fired from a job before,” Gilman, who said she’d never been written up in the nearly two years she worked at the store, told VICE News. “I think I had a little bit of a panic attack when it happened. I didn’t know what to do.”

Both Gilman and the company also said she was offered a chance to watch the video but declined.

“I suppose I just didn’t see the point in arguing back to them because at the end of the day they’re corporate and I’m just a barista, they’ll see what they want to see,” Gilman said. “There are partners at my store that have broken company policies but their names weren’t on the letter or in the press release, so they’re safe.”

“I’m 20 years old, a junior in college, overwhelmed with everything, and this just sprung on me a month and a half after the whole thing happened,” Gilman said. “I didn’t see the point in arguing with them because I’m replaceable. It’s sad, but true.”

“At the end of the day, they can just hire a new person and go on with their lives,” she added.

Workers at this particular Starbucks store have complained of malfunctioning equipment in the past. In the letter sent to Johnson, workers raised a particular incident in December—which some employees at the store now refer to as “fume-a-geddon”—in which the plastic encasement of a store oven melted and the store’s lobby was filled with fumes and smoke.

“This incident led to one of our best shift supervisors leaving the company because she no longer felt supported,” the partners wrote in the February letter. “We will no longer tolerate an unsafe work environment.”

Alyssa Watkins, a shift supervisor and lead organizer at the store, told VICE News that after the ovens began to fail, she suffered from lightheadedness and a migraine that lasted for more than two days. Watkins filed a complaint with the North Carolina Department of Labor’s OSHA division on December 6, but in February, the agency notified her that it closed the complaint after the store replaced the ovens.

Though this particular Raleigh store only opened two years ago, Gilman said the store often has trouble with espresso machines and card readers not working. “It’s not an abnormality for something like this to happen at our store,” she said.

Gilman is not the first organizer at a Starbucks store to be fired. Starbucks Workers United, the union representing Starbucks workers, told VICE News last week—before Gilman was fired—that it believes at least 16 Starbucks workers have been fired in retaliation for their union activity.

“Our ballots are supposed to be mailed at the start of this week and the incident they’re firing her for happened two months ago,” Watkins said in a statement provided by the union. “It’s very clear this is an effort to stop our unionization.”

But in a few similar cases the NLRB has heard so far, they’ve disagreed. In March, the agency issued a complaint against Starbucks after it fired Phoenix barista Alyssa Sanchez and suspended shift supervisor Laila Dalton, finding that the company retaliated against them. Dalton was fired April 4, the same day interim CEO Howard Schultz held a town hall with employees where he said unions were “assaulting” American companies like Starbucks.

In February, the company fired seven pro-union Memphis workers after they gave a local news crew an interview inside their store. Bloomberg News reported Friday that the NLRB found the firings were illegal and will file a complaint against the company unless it settles with the workers, which the NLRB confirmed in an email to VICE News.

Starbucks Workers United said in a release that they will file a charge with the NLRB against Starbucks over Gilman’s firing, and that a protest at the store is set for Monday morning.

“In terminating Sharon, Starbucks continues to treat us inhumanely, and displays a callous disregard for the right of Starbucks partners to unionize,” the union said in a Sunday press release.